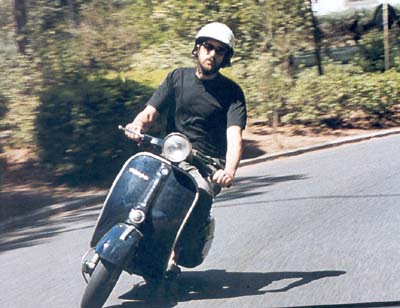 After my cynicism reared its ugly head yesterday, I needed a film like Caro Diario (Dear Diary) today. I needed a film that took my cynicism and slapped it around a bit, making me remember that films can be watched with joy without reading anything more into them and that I don’t have to feel guilty for enjoying something with unpleasant gender politics. I needed something that reminded me that film is an artistic medium, yes, but it’s also more. I needed a reminder that I watch movies from a recommended list because there are movies that I will genuinely like that I would otherwise pass over.

Nanni Moretti’s film is a sort of autobiographical journey through part of his life. It consists of three roughly equal parts with a slightly longer middle section. The first half hour (“On My Vespa”) concerns Moretti driving around Rome on his Vespa looking at various neighborhoods and narrating a stream of consciousness collection of thoughts about the decline of Italian film, where people live, and anything else running through his head. The second (“Islands”), is about Moretti and a friend visiting several Italian islands looking for a place to work and runs about 40 minutes. The final half hour (“Doctors”) is about Moretti’s personal battle with Hodgkin’s lymphoma and his frequent misdiagnoses by various doctors.

The film I am most put in mind of, particularly in the first half hour, is David Byrne’s True Stories. There is, as mentioned above, a sort of stream of consciousness driving this part of the film at least, with Moretti driving around on his Vespa and talking about anything that pops into his head. We get little comments about a variety of subjects, and one particular sequence where he tortures a film critic who enjoyed Henry: Portrait of a Serial Killer by forcing him to listen to his own reviews. He claims to want nothing more than to learn how to dance thanks to seeing Flashdance and has an embarrassing encounter with Jennifer Beals. For all its rambling and nonsense, this part of the film is quite charming and endearing.

The middle is the most like a comedy. Moretti, who plays himself, goes off to visit a friend named Gerardo (Renato Carpentieri) who is deep in study on James Joyce’s Ulysses. He starts on Lipari, where they find the atmosphere too confusing to get any work done. They begin skipping from island to island, and in each place, they find that something has happened that prevents them from getting any work done. In one of the best scenes in the film, they discover that Salina is essentially run by the children of the parents and that the children always answer the phone and immediately dominate the conversation. It makes phone conversation impossible, as the kids incessantly ask the calling adults to make animal noises, and we see a series of people trying desperately to talk to an adult and instead clucking and barking and mooing.

They’re never able to find a good island, in part because Gerardo becomes addicted to soap operas, forcing Nanni to ask American tourists what’s happening on “The Bold and the Beautiful.” He eventually abandons the quest for finding the right place to work when he discovers that the island of Alicudi had no electricity, and thus no television.

Just as the first section is the most personal and the middle is the most humorous, the final section of the film is the most serious and tragic. Moretti is plagued by an itch on his legs and insomnia and goes to a series of doctors for relief. He keeps all of his prescriptions and medications and goes through them after each visit to a doctor. His itch worsens and spreads to the rest of his body. He takes histimines, pills, dabs on creams, gets special shampoos, tries acupuncture and other alternative quackery and eventually develops a cough that leads to an ex-ray revealing a mass on one long. His treatment is successful—this is much more about the failure of the doctors than it is about his own illness. There’s comedy here, too, but it’s far blacker than the comedy of the first two sections.

Nanni Moretti seems like the sort of guy I’d love to hang out with. He’s smart and funny and seems to not take himself seriously at all despite his stature as a director. Caro Diario shows him to be genuine and personable, and to be both amused and nonplussed by the ridiculousness of the situations around him.

I thoroughly enjoyed this film. It went by incredibly quickly. For all its meandering narrative and essential lack of plot, I found it utterly charming. If you’re willing to spend some time simply enjoying what is before you without looking for plot or meaning, you’ll find a great deal here to enjoy. Moretti's film is delivered with a wink and a nod, and at just the right tone to make that fun rather than sardonic.

Why to watch Caro Diario: It’s joyous, charming, and fun, even when it’s deadly serious.
Why not to watch: Its lack of plot will put off many people.