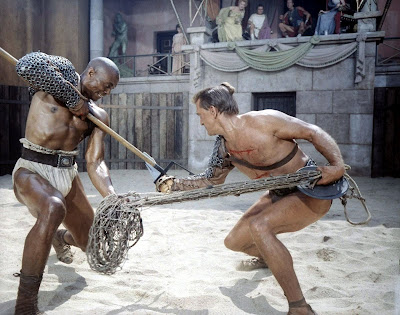 You expect certain things from certain directors once you’ve seen enough of their work. It’s difficult once one has seen a great deal of Kubrick’s work to fit a film like Spartacus in with Dr. Strangelove and The Shining. And yet, Kubrick it is. I still find it difficult to reconcile this fact with what I expect to see from good old Stanley, and this is despite the fact that I’ve seen this film before.

Our hero, Spartacus (Kirk Douglas), is a Roman slave sent to work in mines at the tender age of 13. When a fellow slave collapses and he is commanded to essentially let the poor guy die, he fights back, and for his trouble is strapped to a rock and left to die as a lesson to the other slaves. Fate intervenes with the arrival of Batiatus (Peter Ustinov), a slave master and owner of a gladiatorial school. He arranges to purchase Spartacus, sending our hero off to life in the gladiatorial pits after a good six months of learning how to swing a sword.

It is here that Spartacus meets Varinia (Jean Simmons). Batiatus rewards his star pupils with some female companionship from time to time, and Spartacus is taken with the young woman, but refuses to essentially rape her. For this, he is punished by seeing her forced to be with other gladiators. Still, the two fall passionately for each other, unable to act on their desires.

The arrival of some bigwigs from Rome changes everything. The main villain of the film is one of our new arrivals: Crassus (Laurence Olivier). With his friend Marcus Publius Glabrus (John Dall) and their two women, he demands a show—he wants a battle to the death between slaves. Batiatus is forced to agree, and the women choose their combatants, and naturally Spartacus is chosen. He actually loses his fight to a large slave named Draba, but Draba refuses to kill him, and is killed himself in turn. The other major plot point here, in fact the one on which the entire film turns, is that Crassus purchases Varinia and the next day she is sent to Rome.

This does not sit well with Spartacus, who is teased about this turn of events by the slave master, Marcellus (Charles McGraw). In a moment of true awesome, Spartacus rebels and drowns Marcellus in a pot of soup. The rest of the slaves follow suit, and suddenly there is open rebellion, with the slaves breaking out of the gladiatorial school and heading for the countryside. The news of the slave uprising emboldens other slaves in the area, and soon a large chunk of the empire is in an uproar as slaves all over turn on their masters and head for the hills.

We have a few more players to throw into this mix. First is Gracchus (Charles Laughton), a Roman senator who is also the mortal enemy of Crassus. We also deal with Antoninus (Tony Curtis), a literate slave who escapes from Crassus and joins the rebellion, quickly becoming the close friend and trusted advisor of Spartacus. The bulk of the rest of the film concerns the politics of the uprising, the efforts to put it down, the quick victories and eventual defeat of the slave rebellion, and the final terrible fate of Spartacus and Antoninus.

It’s mildly surprising to me just how effective a great deal of this film really is. The battle sequences are excellent, and this is true both in the small-scale combats as well as the massive pitched battles of the slaves versus the legions of Rome. This fights are exciting and entertaining, and I was duly surprised when I saw Kirk Douglas slice off a man’s arm at the elbow in the heat of battle. It looked really good as an effect.

Where the film tends to falter for me is in many of the slower scenes. There’s no issue with the performances, but with the set and the backdrop. It’s patently obvious which scenes were filmed on a soundstage. These moments look terribly fake and stagey, and fall flat because of it. This was far more the norm back in the day, but filming in actual fields would have been far more effective, or at least would have looked better.

The film also feels dated thanks to the basic plot. We know that somehow Spartacus will find Varinia and the two of them will be as happy as they can be in the time that is left to them. There’s no mystery here because the screewriter (Hollywood Blacklist victim Dalton Trumbo) has followed the basic convention in all but the end. For my money, it’s Peter Ustinov who steals tis film in scene after scene. Batiatus is a fun character, and Ustinov plays him as part lecher, part coward, part businessman, and always able to see the humor in any situtation no matter how dire. Even with things at their bleakest, Batiatus keeps a sense of humor as he battles to save his wealth and acquire more.

Spartacus is good. At something north of three hours it’s perhaps too much.

Why to watch Spartacus: Swords, sandals, and slave rebellion.
Why not to watch: It looks and feels its age.