Film: Wong Fei Hung (Once Upon a Time in China)
Format: DVD from NetFlix on kick-ass portable DVD player. 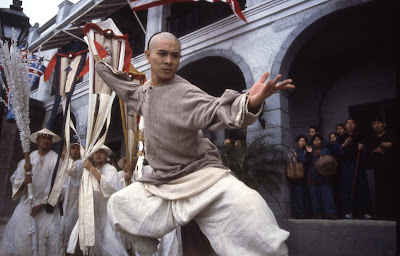 Every now and then I get a film that I just don’t get. I spent the last two hours watching Wong Fei Hung (Once Upon a Time in China), and I have no idea what the hell happened. There’s an awful lot of fighting and some pretty tasty wire work, but as for plot, I’m at a complete loss. If you’ve never seen this film, You can guess just about as well as I can. Seriously, there are some truly kick ass fights and some stunts that are difficult to believe including a massive battle on a series of ladders, but I still have not a single clue as to the story.

Here’s what I know, and it’s not much. There’s a guy named Wong Fei Hung (Jet Li) and there are a bunch of people from America in China. The Americans are the bad guys because they are trying to Westernize China. You can tell they’re the bad guys because they’re obviously bad in a melodramatic way. There are also some Chinese people who have been to American and have now returned, including a woman called Aunt 13 (Rosamund Kwan). And there’s another guy (Shi-kwan Yen) who wants to start a martial arts school and decides that to do that he needs to kick the snot bubbles out of Wong Fei Hung. There’s also a guy who might be a martial artist and might be a circus performer, but really just seems to get in the way. Everyone calls him Foon (Biao Yuen), which might actually be his name, but also sounds like something really awesome to call someone pissing you off. There’s also a criminal gang that is evidently kidnapping Chinese girls to ship them off to use as prostitutes. I’m going to revert to Wikipedia for a quick plot summary and see if it makes any more sense.

Yeah. It doesn’t. It probably should, but it really doesn’t.

I can’t help but think that at least a part of the message here is that anything that isn’t Chinese is bad, although Wong Fei Hung does appear in western clothing at the end, so maybe that’s not entirely right. That seems like the message for the first two hours, though.

It’s a good thing that I didn’t watch this for the plot, because if I had, I’d be really pissed off right now. So don’t watch this for the confusing plot. I’m sure if I had watched it intently, I might have been able to follow it, but really, there are a ton of massive staged fights and I had no idea which guy was who or what they were fighting over. Some of the fighting seemed to be with criminals, and some with Americans, and some with government officials, and everybody was, well, Kung Fu Fighting, and after a little bit I decided to just sit back and watch all of the stunts and wire work.

I think that’s the best way to approach this film, since about 80% of it is fighting sequences. Roughly 5% appears to be geared toward the plot. The last 15% is centered around the buck-toothed Chinese guy who wears Western clothes and calls everyone “stupid,” the fat butcher who actually is capable of kicking ass, and the clownish Foon guy. I gather that a lot of this was supposed to be comic relief, and it might have been funny had I understood anything that was going on. But I didn’t, so it wasn’t.

Really, that’s all I have to say about this film. It’s 40 minutes of rambling nonsense liberally punctuated by 90 minutes of Jet Li kicking the living shit out of everything that crosses his path and looking all badass. As disappointing as that may be in many respects, I’ve certainly seen worse, and the asskickery is worth the price of admission. Just don’t expect much to make sense. It’s sort of like martial arts porn—you’re not really watching it for the great plot and serious acting anyway, so you might as well just sit back and let yourself enjoy it for the real reason you slipped it into the DVD player.

Why to watch Wong Fei Hung: Asskicking a-plenty.
Why not to watch: Coherence takes a back seat.

Email ThisBlogThis!Share to TwitterShare to FacebookShare to Pinterest
Labels: action, Hark Tsui, Once Upon a Time in China, Wong Fei Hung