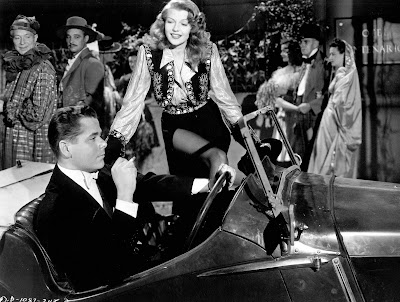 Old school Hollywood glamour was a real thing. If you don’t believe me, you should get a load of Rita Hayworth’s entrance in Gilda, flipping back her hair and looking mildly innocent, coquettish, and sexy all at the same time. It’s a great moment, one of the great film moments from the era.

The film follows Johnny Farrell (Glenn Ford), a small-time gambler who finds himself in Buenos Aires. He makes some money on a craps game and is immediately mugged, but is rescued by a man named Ballin Mundson (George Macready). Mundson runs a high-class illegal casino in town, and warns him against trying to cheat there. Farrell doesn’t listen and goes anyway, gets himself in trouble, and manages to swing this as a job helping run the place. He soon becomes Mundson’s right hand.

Then, everything changes. Mundson goes away and returns with a wife named Gilda (Rita Hayworth). It’s quickly evident that Gilda and Johnny had a past, and it’s a past that ended very badly. Mundson seems mildly aware that they know and dislike each other, but this doesn’t stop him from putting Johnny in charge of watching his wife as well as the casino. For her part, she does everything she can to irritate him by spending time with other men, flirting and looking for all the world as if she is prepared to invalidate her marriage vows at any moment. Johnny simply acts with contempt.

In the meantime, there’s a pretty important subplot going on with some post-war Germans and a tungsten cartel. While it’s difficult to follow and comes mostly at the end, the Germans lent Mundson the money to buy the cartel and signed it over to him, and then when they tried to take it back, he refused. In the excitement surrounding this, Mundson kills one of the Germans and then fakes his own suicide.

While the plot isn’t easy to follow here, it doesn’t really matter, because this is where Gilda really kicks into high. Gilda is left as the sole heir to Mundson’s fortune and Johnny is made the executor of the will. The two get married—her because she truly loves Johnny despite her claim of hating him and him because he wants nothing more than to punish her for her treatment of him and of Mundson.

From this point forward, this romance becomes an exercise in cruelty—she does what she can to get away from him, up to and including performing a raunchy almost-striptease in a crowded room while he does everything he can to keep her in check, a prisoner in her house, in the city, and in her own life.

Here’s the thing about Gilda: about half of it works. The whole love-hate relationship between Gilda and Johnny is fantastic, in part because it’s so unexpected in general and especially so in a film of this vintage. Glenn Ford plays Johnny as cruelly as he can. He hits her, yells at her, and ridicules her at every turn. It’s almost sadistic. Strike that—it is sadistic. It’s cruel and heartless, and wonderful because of it. Rita Hayworth also works in this, in part because of her stunning beauty and in part because she knew exactly how to spin that beauty and make it work for her.

What doesn’t work is the whole tungsten cartel thing. The only reason it’s here is to give Mundson a reason to fake his own suicide and run away for a few months, giving Johnny and Gilda a chance to fall into this relationship of cruelty and mockery. This could have been done just as easily with something happening with the casino—a failed payoff, for instance. It would have eliminated a needless and pointless complexity that simply doesn’t work. This all comes back at the end of the film, which makes for a pretty unsatisfying conclusion.

The good news is that the whole “what’s up with the Germans?” thing can be completely ignored. In fact, I did ignore it for the most part, and it really didn’t affect my enjoyment of this film. The chemistry between Hayworth and Ford is real and mesmerizing, and that more than anything makes this film worth watching. The plot becomes something truly secondary to this relationship between these two people. That’s the selling point here, and it sells it in spades.

So, Gilda is flawed, but flawed beautifully. With a different ending and some changes in the middle, it would probably rank as one of my favorite films of the era. As it is, it simply stands as a damn good film about a twisted relationship.

Why to watch Gilda: It’s the angriest romance ever filmed
Why not to watch: It punks out on the ending.