Sex On the Beach 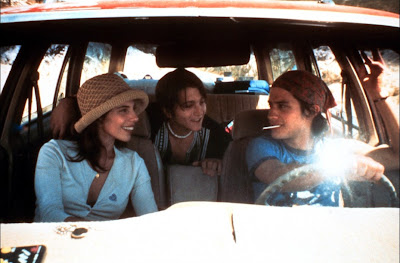 Let’s get this straight right off the top: Y tu Mama Tambien is in a large part about sex, at least on the surface. I don’t mean it’s about love or marriage. It’s about bumping uglies, the beast with two backs, all of those dysphemisms for the act of sex uttered by giggling schoolboys who aren’t 100% sure what sex actually is. Virtually every scene has some sexual content in it, and there’s a surprising amount of naked butts. I just wanted to be clear on this.

We start with some oinkin’ and boinkin’ right away. We are introduced to Tenoch (Diego Luna) and Julio (Gael Garcia Bernal), two young friends who seem to exist for sex and drugs (and possibly rock ‘n’ roll). Each has a girlfriend who is leaving Mexico for Europe, and each demands his girlfriend give him an affirmation that she will not have sex with anyone while gone. The boys make the same pledge, then do everything they can for the rest of the summer to break that pledge.

Not long after this, Jano goes off for a conference and telephones Luisa, drunk and tearful, confessing his own infidelities to her. She decides to take up with Tenoch and Julio and head off to Heaven’s Mouth even though it doesn’t exist. Along the way, there’s plenty of sex and a lot of things between Julio and Tenoch come out and all of this affects their relationship into the future and for the rest of their lives. When I said that this film is all about sex on the surface, it’s far more about this relationship between the two guys.

The sex, well, it’s going to bother some people, because it is not merely up front in the film but it is completely in the face of the viewer. As the three drive around Mexico looking for the beach that doesn’t exist, they talk almost exclusively. And because Luisa’s part of this trip comes from a desire to get away from Jano and his infidelities, you can almost certainly bet that there’s going to be plenty of sex between Luisa and Tenoch, Luisa and Julio, and Luisa and both. Sex is right up front at all times throughout this film, and there’s no getting away from it.

One of the more interesting aspects of this film is the voiceover narration that pops in throughout the film. When it does, all of the other sound falls out and we get only the voice of the narrator telling us some unknown aspect of the scene in front of us. It reminded me very much of a very depressing version of Amelie. What we learn is not fun aspects of what is going on around us, but tragic bits of history or depressing facts about the future. We meet a fisherman and his family, for instance, and discover that in a few years where he fishes will be taken over by a resort and he will be forced to move. He’ll attempt to start a business giving boat tours but will wind up a janitor at a hotel and will never fish again. So, thanks for that, movie. Thanks for serving us a side of depressing future along with all of the humping.

I appreciate what Y tu Mama Tambien is attempting to do here, but I’m not sure how much I liked it as a film. Tenoch and Julio are punks, and I didn’t like either of them very much. I don’t think I’m supposed to, really, but I most certainly did not. I do like Luisa as a character, though, and the film is always better when she is on camera and when she is in charge of anything.

In many ways, the film is about Luisa and what happens to her. There are subtle hints throughout the film that don’t mean anything until we get to the coda at the end, when everything that we’ve been told about her becomes clear. True to form for this film, this is not a happy moment for anyone, least of all Luisa herself.

A last word on all of the sex. The sex isn’t graphic, although there is a lot of it, and we see a lot of what is going on—there are no cuts to above the waist here—we get naked butts and thrusting. Because of this, Y tu Mama Tambien was given an NC-17 rating in the United States. It’s aggravating. Decapitation and disembowelment, pretty much regardless of how much is shown will turn up rated R, but sexual conversations and a lot of what looks like could be actual sex (there’s no penetration evident), and its adults only. The MPAA continually drops the ball on this one. Killing is fine, but sexual pleasure is dirty and must always be avoided at all costs. And because of this and the Puritanical streak that still runs through a lot of America, Y tu Mama Tambien will offend a lot of people.

Why to watch Y tu Mama Tambien: With all this sex, you know you kinda want to.
Why not to watch: The sex just isn’t that interesting to watch.