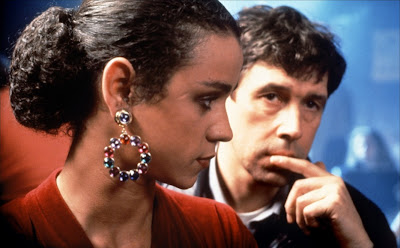 Every now and again, a film comes out that has a moment that transcends everything else about the movie. The Crying Game is very much that sort of a film. There’s a reveal about halfway through that defines it completely. Even if you haven’t seen the film, you more than likely know exactly what I’m talking about. I knew the big secret of The Crying Game within a month of its release. Silly, stupid me thought that the reveal was actually central to the plot of this film. It so totally isn’t. I mean, it’s certainly more than a simple plot point, but the movie hardly revolves around it.

Instead, we’re thrown immediately into a situation with a young black British soldier named Jody (Forest Whitaker) romancing a young Irish girl named Jude (Miranda Richardson). It’s evident that we’re in for a good old film cliché right off the bat. There are some white guys who seem to have a real issue with the black guy hanging on a white woman, and the pair gets followed when they leave. It’s a lousy trick, really. The easiest way to get the audience to dislike someone is to play to an old, failed prejudice like the one about interracial couples. It’s such an easy way to sway an audience. I was, I admit, a little put out.

So it’s a damn good thing that The Crying Game is a better film than grabbing at that sort of low-hanging fruit. No, this isn’t a race thing, but an ideological battle of a different sort. See, Jude is a member of the Irish Republican Army, and so are the guys who kidnap Jody. One of their own has been captured by the British and is being interrogated. Jody is their hostage who will be used as leverage to get their man back. It was at this moment that I suddenly realized I wasn’t in for a film about a shocking reveal and cheap parlor tricks, but a real film that was made with a good deal of intelligence.

We spend a good deal of time with Jody in captivity. His main guardian is Fergus (Stephen Rea). They two form a sort of bond with each other. Jody is pretty aware that he’s not going to get out of this alive, and he asks Fergus to take out his wallet. Inside is a picture of him and the woman he loves: Dil (Jaye Davidson). He asks Fergus to please look in on her afterwards and tell her that he was thinking of her at the end. Of course, when it comes time to kill Jody, Fergus is given the task. What happens here is an even bigger shock moment than the one everyone knows; I won’t spoil it for those who haven’t seen the film. Suffice it to say that things go badly for the IRA on this day and Fergus winds up in England under an assumed name and working at a construction site. He has enough information to track down Dil, and does so. He’s immediately taken with her, and the two start a strange, on-again/off-again romance, much of which happens in a bar run by a man named Col (Jim Broadbent).

But it can’t be just left here, of course. Jude turns up again, along with higher-up IRA mastermind Maguire (Adrian Dunbar). Maguire is hot to kill Fergus for his previous transgressions, but instead, he’s given a chance to redeem himself. This means that Fergus is back on the front lines of the IRA struggle, and now Dil is caught in the middle—if Fergus doesn’t do the job, it’s Dil who will pay the price.

Of course, there’s that well-known shock moment in the middle that gets all of the attention. What’s so smart about this film is that while this certainly colors the film in a specific way, the film doesn’t focus on it in any specific way. What I mean is that it’s undoubtedly an important aspect of the characters and of the film itself, but the film would work in terms of plot without this added, interesting bit of plot complication. It’s this very fact that makes this film as smart as it is. Without this particular event…this would still be a very smart, intense thriller made up of excellent performances and an engaging plot. That there’s something more only makes it that much more memorable.

This was an interesting film experience for me, because I knew only the one thing about it, and that one thing turns out to be such a small part of a film that would work equally well without that complication.

The Crying Game has been sitting in my Instant Queue for ages, but I never pulled the trigger on it. I should have, because it’s a fascinating film totally worth seeing, and one of the most memorably strange romances I’ve seen in a long time.

Why to watch The Crying Game: It’s a way more interesting story than that shock moment.
Why not to watch: If you don’t know that moment is coming, it’s quite a wake up.