One problem I have with the more difficult to find films is that I tend to write a lot of these reviews while I am watching the film, sort of an on-the-fly reaction. I can’t do that with streaming internet video; the laptop is sort of busy when the film is playing, meaning I can’t take notes that turn into these reviews unless I do so by hand. Here’s a news flash—I don’t generally like writing by hand, which means I simply watch and wait, trying to formulate thoughts on the film without having a trustworthy method to capture those ideas. 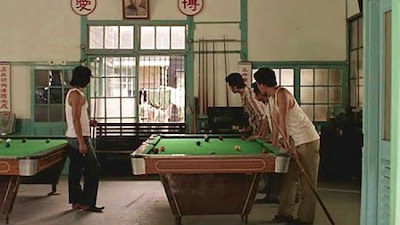 For particularly memorable films, this is not a problem. For Tong Nien Wang Shi (A Time to Live, A Time to Die, listed as The Time to Live and The Time to Die in the Tome of Knowledge), a lot happens, but the camerawork is so unlike what I’m used to that the film seemed to simply wash over me. This isn’t necessarily a bad thing, but it doesn’t help my memory any. I hate to think I’m so much of a Philistine that I require explosions and/or monsters to jog my memory, but in this film, such things would have really been helpful.

Alas, there’s nary a burning oil refinery, mutated hell beast, or explosion of violence to help me along.

Instead, the film is slow, almost meditative despite moments that in an American film would be edited to hell and back. Director Hsaio-Hsien Hou seems to have cribbed notes from directors like Yasujiro Ozu in terms of finding a good spot for his camera and leaving it there while the action simply happens in front of it. We’re given a lot of long takes. Frequently, the events taking place in front of the unmoving camera are tragic and awful, but the camera doesn’t pan away and we’re not given the respite of a different angle.

Tong Nien Wang Shi is a semi-autobiographical film, but one that is untainted with the idea of nostalgia. There is very much the sense of attempting to not relive something through rose-colored glasses, but to recreate such a time and place as best as possible. Our family under observation here has left mainland China and moved to Taiwan, hoping to get away from the communist regime in place. The children study and go to school, hopeful to pass college entrance exams. Mother cooks and sews and keeps everything together. Father works and is suffering from tuberculosis. Our narrator in teen form is a budding delinquent, tired of being constantly poor and seeing a street gang as a possible way out.

Really, that’s the bulk of the film here. Everything boils down to this idea of family and tradition versus the new way of doing things and looking at the world. Should our narrator opt for the fast cash or should he stop his criminal activities and go forward on the straight and narrow?

I can’t really admit to loving this one, but again find that it is a film that demands both attention and respect. The decision to use mostly static camera shots is a solid one because it gives us nowhere to hide when things begin to go badly. When the father dies, for instance, we cannot look away from the desperation in the family. When the doctor comes, we see the whole procedure. The narrator’s criminal actions are similarly filmed, almost as if they are not specifically connected with the film, but simply happened in front of the camera while film was rolling. We see the family’s poverty and it becomes just another part of the film, not an expose into the lives of the poor. It’s the right choice. It gives us a sense of the time and place without forcibly putting us into the center of the action. Instead, we are merely observers of Hsaio-Hsien Hou’s stroll down memory lane.

Ultimately, this is another film that I respect more than I like. It’s slow, perhaps too slow in places, and I’ll admit that I had some difficulty identifying the characters. Part of this may be the subtitles. Frequently, the written names given for a character and the way it is pronounced on screen don’t match at all, which creates a large disconnect.

Still, you could do worse. Hsaio-Hsien Hou is an interesting director. Much of what he does here is repeated in a film like The Puppet master, but is no less effective in a different sort of biography.

Why to watch Tong Nien Wang Shi: Reminiscence without nostalgia.
Why not to watch: You don't get to turn away from the personal tragedies on screen.