...Get Out of the Kitchen 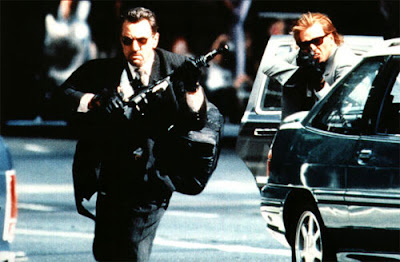 Some movies get an audience by trading on the plot, some on the special effects, some on a popular license. Plenty of movies gain an audience by shilling the stars of the film. Few had the sort of star bank as did Michael Mann’s Heat, the first film to feature Al Pacino and Robert De Niro on screen together. That’s the sort of thing that makes a film geek drool.

Fortunately, Heat lives up to the hype. But we’ve got a long way to go to get to the end of this. After all, this is a Michael Mann crime film, which means that we’re going to spend a good deal of time in the personal lives of the principle characters. It’s also a film that clocks in at just under three hours, so we’re going to get a lot of it. But, since it’s a Michael Mann crime film, we’re also in for a good ride.

Neil McCauley (De Niro) is a career thief. He and his crew plan and execute an armored car heist, working it perfectly. However, the new guy on the crew, Waingro (Kevin Gage), kills off one of the guards. Knowing that the crime has now become a capital crime, the crew knocks off the other two guards to prevent them from being witnesses. The upshot of this crime is that the armored car is carrying bearer bonds owned by a money launderer named Van Zant (William Fitchner). McCauley’s fence Nate (John Voight) offers to sell the stolen bonds back to Van Zant, allowing everyone to profit. To cover his own end, McCauley attempts to kill the renegade Waingro, who gets away.

Into this comes police Lieutenant Vince Hanna (Pacino), who is on the trail of McCauley and his crew. While he’s chasing down what he can, he also gets a murder in his jurisdiction; as it happens, the murder is committed by Waingro, who is a serial killer of prostitutes.

There’s also plenty of infidelity to go around. Hanna’s wife Justine (Diane Venora) is having an affair because he is distant and married to his job. McCauley’s number two Chris Shiherlis (Val Kilmer) is deep in gambling debt and isn’t aware that his wife Charlene (Ashley Judd) is doing the nasty with ex-criminal-turned-liquor salesman Alan (Hank Azaria). And McCauley himself starts up a new relationship with a graphic artist named Eady (Amy Brenneman). Somewhere in all of this is Hanna’s step-daughter, Lauren (Natalie Portman), who is depressed and frequently ignored by both her birth father and by Hanna.

The upshot is right out of the film noir playbook. McCauley wants nothing more than to get one last major score and be done with the life, intending to fly away to New Zealand with Eady. He plans one last major heist at a bank, which goes south quickly. We learn that it turns bad because Waingro informed on him to Van Zant, who wants him dead. Van Zant called the police in, which leads to a shootout, ending in the deaths of several officers, including Detective Bosko (Ted Levine) as well as several of McCauley’s men, namely Michael Cheritto (Tom Sizemore) and driver Breeden (Dennis Haysbert). Chris is wounded as well.

The third act of the film, more or less, is Hanna closing in on McCauley and McCauley trying to tie up all of the loose ends he can before fleeing the country. These loose ends include finding his old driver Trejo (Danny Trejo), who he thinks ratted him out, killing off Van Zant, eliminating Waingro, and finding Eady to get her onto a plane.

The big scene, naturally enough, is the conversation before the failed heist between Hanna and McCauley. They’re aware of each other, and more importantly are aware of each other’s position in what is going on. They sit over coffee and talk, and it’s evident that there’s a certain amount of respect between them. They almost like each other. And both say that if it comes to it, they’ll kill the other one without a moment’s hesitation, all things being equal. It’s a great scene, and one of the few (the ending features both actors as well) that puts both men on camera at the same time. It’s easy to imagine that in addition to having this conversation in character, they’re having it in real life. There’s a certain level of respect between them, but both really want to be top dog.

Heat is complicated and contains the sort of twists and turns that are part and parcel of Michael Mann’s better films. There’s a lot here, and I can’t help but think that not all of it was completely necessary. Some of this, some of these plot machinations could have been left on the cutting room floor without too much loss, and with a more streamlined film in general. What’s here isn’t bad, but it’s messy.

On the other hand, that’s one of the things that makes this film so successful. It is messy, just like real life. We come to a conclusion at the end of the film, but not specifically the conclusion. There are ends left untied and plots that could still be followed. Most are tied up by the end, but there are a few still hanging. But this messiness makes the characters far more real. Natalie Portman’s character is hardly essential to the plot—she’s always tangential, but she’s also important in giving Hanna something like a life outside of the job.

I do, however, think it’s too long. Coming in at 170 minutes makes Heat overstay its welcome a little. It might run more smoothly with 20-30 minutes excised from it, perhaps with one or two sub-plots taken out.

Why to watch Heat: Pacino. De Niro. Same frame.
Why not to watch: It’s probably a little longer than it needs to be.