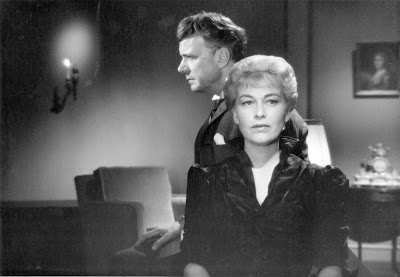 I think I have a pretty high threshold for certain things. I try very hard not to be frustrated by certain peculiarities of film. I don’t mind long shots, or films that sometimes seem to have no point. I don’t specifically bore easily. That’s worth noting, because I also have to admit that I was bored within the first 20 minutes of watching Dreyer’s Gertrud.

The problem with this film isn’t the story. Really, it’s not. Done in a different way, this could well be a fascinating tale of a woman so bent on finding a love worth keeping that it controls her entire life. It’s not, on its face, uninteresting. The problem comes with the way it is filmed, or in the direction given to our actors. Evidently, the direction that Dreyer gave everyone in this film is to imitate a mannequin as much as possible. Their roles are to stand still in one place, look in one direction, and speak lines at each other. Passion tends to be expressed by rubbing foreheads together and then gazing off into the distance instead of at the person in question.

Our title character, Gertrud (Nina Pens Rode) is a former opera singer married to a man named Gustav Kanning (Bendt Rothe). Gustav is about to be named to the Danish cabinet and he is naturally excited. Gertrud doesn’t care, though. See, he’s been so busy with his career that he just hasn’t had any time for her. She’s found someone else—a promising young composer named Erland (Baard Owe). He, evidently loves her fully and completely as she wishes to be loved, and she wants to run away with him.

As it turns out, though, Erland is something of a bastard himself. He’s spending his time telling all of the important people of Denmark that he’s banging Gertrud Kanning. Meanwhile, he’s getting another woman pregnant, so while Gertrud is all ready to run off with him, he can’t or won’t go due to baby Erland being on the way. Gertrud runs into a former lover who wants to get back with her, but since he was also too concerned with his career and not nearly concerned enough with existing only for her, she denies him, too.

Again, all of this could well make an interesting film, but I don’t buy any of it for a moment. The people in this film are the most singularly passionless people I have ever seen on a screen. When Gertrud and Erland get intimate (and since this is a film from 1964, we’re not getting much in the way of intimacy), they kiss like a pair of carp and then stare in opposite directions for a bit. For all the world, Gertrud looks half the time like she is sleepwalking. None of these people have a facial expression more interesting than bland acceptance. The Scandinavian stereotype of emotionlessness and stoicism is only reinforced here. Virtually every sentence is spoken in the same dull monotone. Deep passions are expressed with the same enthusiasm as a typical dinner guest asking for the butter.

At one point (I wish I were making this up, but I’m not) we see Gustav riding in a carriage, trying to decide what he’ll do about his wife. For a few minutes, he sits expressionless while we hear his internal monologue. Yes, thrill to the scene where the expressionless Danish politician thinks to himself. If you’re at all like me, you realize that he’s thinking the shit out of those thoughts. In the next scene, we see Gertrud and Erland in the Scandinavian afterglow—both fully clothed, her looking like a milkmaid—and she tells him that being with him makes her “so happy.” At this moment, she almost smiles but can’t quite pull it off, and instead just looks dyspeptic. She and Erland look at each other with all of the emotional content of a person shopping for toiletries.

In short, this film is flat. At one point, at some sort of feast or party, we get something like a parade of singing Danes with giant candles and drums and flags, and it’s got all the pomp and pageantry of the opening of a new Stuckey’s. Three men look all, for all the world looking (left to right) like Mitt Romney, a drunken grandfather, and a guy with severe constipation. Meanwhile, Gertrud herself stands on a staircase and waves a handkerchief, looking like she’s in an entirely different building.

Y’know what? I’ve beaten up on this pile long enough. It sucked. I’m done.

Why to watch Gertrud: Because Dreyer also did the excellent Passion of Joan of Arc.
Why not to watch: Evidently everyone in this film has undergone rigor mortis.