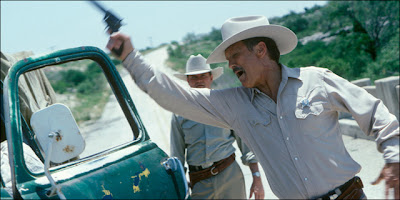 There were moments when I was watching Lone Star that I felt very much like I was watching the precursor to No Country for Old Men. These moments were fleeting. Really, the only points of commonality are that one of the main characters is a cop and that it takes place in Texas. It’s got one very significant issue that could be easily fixed, even now, years after the film was released, but we’ll get to that in a little bit.

Out in the middle of a former shooting range, a couple of men find a body. Well, what they really find is a skull of someone buried there years ago. Not too far away, they discover a very worn sheriff’s badge, which means that we’ve got an investigation that will be underway soon. We learn shortly after this discovery that current sheriff Sam Deeds (Chris Cooper), the son of former sheriff Buddy Deeds (played in flashbacks by Matthew McConaughey) once had a beef with the sheriff before him. This man was named Charlie Wade (Kris Kristofferson). He was a corrupt sheriff, and when he tried to bring Buddy in on his scams, Buddy refused. The two essentially swore eternal enmity. Shortly thereafter, Charlie Wade vanished. So, the mystery here isn’t the identity of the body in the old shooting range, but how that body got there and who put him there. Buddy Deeds had his gripes with the man, but so did almost everyone else in town.

Of course, this isn’t nearly enough to power a movie of this length. Fortunately, there’s a lot more here than just a murder mystery with half of the mystery already solved. Instead, Lone Star is a film about relationships in this small border town, about history and culture, and family, about heritage, and about truth.

We learn that Sam Deeds lives under the shadow of his father in the world at large, but that he had real issues with the man in his own personal life. We meet Otis (Ron Canada), who runs the local club, had run-ins with Charlie Wade, and has an estranged son. This son, Delmore (Joe Morton), has returned to run the local military base. He wants his son (Eddie Robinson) to follow in his footsteps, but his son has no real desire for West Point or a military career. We also have Sam Deeds’s ex-girlfriend, Pilar (Elizabeth Pena), who is now a widow. There are still sparks between them, but there is also a great deal of resistance, especially from her mother.

This is what Lone Star does best. It presents us with a series of stories and a series of people and makes them very real. We spend a little time with Pilar’s mother, but in that short time, we learn quite a bit about her. We know that a number of the people who work for her are possibly illegals, and that her desire is to help them fit in with American society, insisting on their speaking English whenever possible. She is equally frustrated by them, and we learn that she never approved of Pilar’s choices in much of anything. Two of the characters on the military base, an interracial couple, are considering marriage. These are minor characters (between them having maybe 30 lines), but their relationship is a real one, and the reaction against them by some of the townsfolk is equally real.

Another thing Lone Star does well is move from time period to time period. We go back in time into sort of flashbacks frequently, seeing what really happened in certain situations while back in the film’s present, one of the characters is actually telling the story in question. Many times, the transition from past back to present is seamless and beautifully done. The transition back to the past is, admittedly, sometimes clichéd, with the camera moving over to the side and zooming in on nothing in particular, then pulling back and locating us 30 years previous. Still, these camera moves are stock for a reason: they work.

My biggest issue with this film, believe it or not, is the packaging. Matthew McConaughey is in the film for all of five minutes or so, but he gets top billing because he’s turned into somebody’s idea of a star. It’s Chris Cooper’s film more than anyone else, and he gets third billing on the box, which is ridiculous. There’s no reason he should be relegated to second-tier status. He’s a damn fine actor who isn’t given nearly enough credit for his skill in front of the camera. The same could be said for Elizabeth Pena, who is a much better actor than most people realize. She’s always a positive influence on films, or is at least in what I’ve seen of her. There’s a realism to her performance here, an honesty that makes me believe her as a small town schoolteacher, as a mother, and as someone who is lost in her own way, just like everyone else on the screen.

Lone Star revolves around unraveling a mystery and in many ways around the actual identity of Buddy Deeds. However, it is really a film about life and about our connections with others, about the prejudice we carry without knowing it. It’s about doing what is right rather than what is mandated. It’s a surprisingly deep film for something that really promised only to be half of a whodunit.

Why to watch Lone Star: Many intertwined stories beautifully told.
Why not to watch: Put Chris Cooper’s name first, dammit!