The ninth edition of The Book releases on Monday, October 1 with Tinker Tailor Soldier Spy on the cover. Knowing that, it made sense to get the review in early.

I think I would have made a terrible spy, which makes it a good thing that I never attempted to go into that sort of service. For one thing, I’m far too trusting in general, and that’s not the best personality trait for a wannabee spy. Second, I don’t think I would hold up well under torture. I have a decent pain tolerance, but I’m not a fan of knives or needles and have a desperate fear of being bound or confined. I’d be way too easy to break. But I do enjoy espionage films because they’re all about clandestine meetings and surreptitious assassination attempts and all that sort of fun stuff. Y’know, gun battles and car chases and stuff. 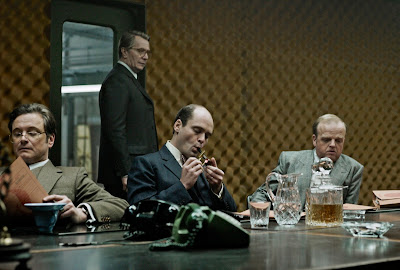 And then there are films like Tinker Tailor Soldier Spy that have a soupcon of action but focus far more on the cerebral side of the spy game. While there’s some action here, this is a film in which our protagonist and his nemesis sit around and talk a lot and think cinematically until the Gordian Knot of the film’s plot resolves itself. I don’t want to imply that this is a bad film or even a boring one, but I was expecting a lot more running/shooting/climbing/fighting and less teasing out of riddles.

Tinker Tailor Soldier Spy is all about plot and very little about the characters themselves. George Smiley (Gary Oldman) could just as easily be anyone else. Certainly there are a few personality quirks that make him a character, but a different character with different quirks would pretty much give us the same film at the end. Because of this, the plot is a convoluted one—too intricate and detailed to get into much depth here. But some background is necessary.

TTSS takes place during the height of the Cold War. A British agent named Prideaux (Mark Strong) is sent to Hungary to pull out a general looking to sell information to the West. The whole thing is a trap, though, and Prideaux is shot and considered dead to his handlers and his agency. British Intelligence, called “The Circus,” writes of Prideaux as another lost agent, but the head of the operation, Control (John Hurt), believes this might be evidence of a mole in The Circus. The failure of this operation forces Control out and Smiley goes with him. Running the organization falls to another high level functionary, a man named Percy Alleline (Toby Jones). Alleline, his deputy Haydon (Colin Firth), and two other high-ranking members named Esterhase (David Dencik) and Bland (Ciaran Hinds) begin a new operation codenamed “Witchcraft” by which they acquire excellent Soviet information. In fact, the information is so good that the American intelligence organization comes in on the deal.

Not too long after this, Smiley is brought out of retirement when an agent named Ricky Tarr (Tom Hardy) arrives with news that there really is a mole in The Circus, and that the mole is evidently well-placed in the organization. Smiley is sent to investigate these claims, and immediately starts turning up things that make him suspicious. A number of people were dismissed at the same time he was, and several have stories that connect to Tarr, to Prideaux, and to Operation Witchcraft. A little more investigation, and Smiley learns that Control had five suspects who he named after the old “Tinker, tailor, soldier, sailor” nursery rhyme. These men are Alleline (tinker), Haydon (tailor), Bland (solider), Esterhase (poorman) and Smiley himself (beggarman). Now, contending with the sudden reappearance of Prideaux, the story of Ricky Tarr, and the increasing evidence that British and American secrets are moving behind the Iron Curtain, Smiley is forced to act to stop the leak and to save both his own reputation and that of his former agency.

Tinker Tailor Soldier Spy is a masterpiece of plotting, and it would have to be since essentially it is little more than a massive jigsaw puzzle with each scene adding in a few more pieces and offering a slightly clearer view of the final picture. The plot is intricate and interesting and there’s very much a sense that there’s a lot on the line here.

All of that is fine, but Tinker Tailor Soldier Spy is deadly slow because it relies so heavily on its convoluted plot. This is very much a story where if you miss a moment you miss the whole thing. What this means is that everything happens at a pace at which the majority of the audience can follow it. For the experienced and relatively bright movie goer, this means that the information comes more slowly than it needs to.

The result is not a boring film, but one that feels like it is in slow motion. I’d like to see more that involves me with the characters here, particularly with just how good this cast is overall, including the Dickensianly-named Benedict Cumberbatch. They just aren’t given enough to do here. This is a damn spy movie, and there ought to be more than just Gary Oldman thinking and listening. It’s not that it’s dull, it’s just that it’s not enough.

Why to watch Tinker Tailor Soldier Spy: Good, old fashioned Cold War paranoia.
Why not to watch: It’s a lot more talkie than its premise might suggest.