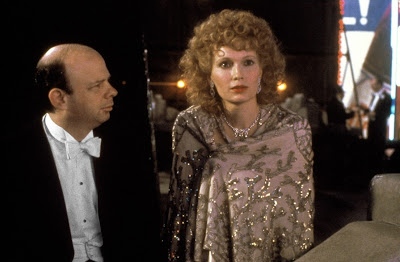 There’s a part of me that loves a nostalgia film. There are plenty of them, a filmmaker reliving his or her past through rose-colored glasses. There are plenty of great ones--Stand By Me comes to mind, as does A Christmas Story. One of my favorites is Woody Allen’s Radio Days, a sweet reminiscence of the time when radio was king, and everyone danced to the tunes that came out of the box in the living room.

That’s really all that Radio Days is, a series of memoirs about life during World War II and before the advent of television. We spend most of our time with Allen’s youthful personality, Joe (Seth Green), but we also meet his extended family, learning a bit about the lives and tribulations of his father (that-guy Michael Tucker), his mother (Julie Kavner), his uncle Abe and aunt Ceil (Josh Mostel and Renee Lippin), his cousin Ruthie (Joy Newman) and especially his aunt Bea (Dianne Wiest). Since the film is a memoir rather than a story, we get vignettes of their life and their attachment to the radio, and how these radio programs define them.

It’s a different take for Allen in a lot of ways. While he loves that era and puts plenty of nostalgia in a lot of his work, since this is at least semi-autobiographical and about children, there’s far less emphasis on philosophy and sex here than is typical. It’s just life—childhood pranks and dreams, the lives of the famous, worries, the War. Because it is almost completely wrapped up in this nostalgia, it’s viewed as a sort of golden time; he says as much at the beginning when he shows us Rockaway with a swelling ocean and in the rain—at its most beautiful, he tells us.

What follows are little stories, both of his family and of the personalities on radio. His favorite show, The Masked Avenger, stars a man he depicts in his mind as a towering giant of justice and muscle, but who is voice by Wallace Shawn. Everyone in his family has a favorite show, from crooning singers, to a ventriloquist, a fact that drives Abe crazy since you can’t tell if he’s moving his lips or not on the radio. Joe exists in a world where radio is central to his everyday life. His love of The Masked Avenger causes his one and only foray into crime, stealing fifteen cents from the Palestine fund for a decoder ring, resulting in him being beaten in turns by his parents and his rabbi.

He and his friends, per radio instructions, scour the Atlantic coast of Rockaway for Nazi submarines and instead find a woman dancing in the nude. She will become their substitute teacher later on, prompting one to whisper, “We’re all going straight to hell.” Aunt Bea looks for love, leading to one disastrous date after another including one that is broken up by Orson Welles’s version of The War of the Worlds. We listen as Joe is spared a beating when the story of a little girl trapped in a well ends in tragedy.

Also running throughout the film is the story of Sally White (Mia Farrow), a wannabe radio star with a high pitched voice, bad diction, and the bad luck to never get a good break. We see her affair with a morning radio host, ending up in her trapped on a roof, caught, and fired. We see her witness a gang shooting, almost get killed herself, and turn this into a chance that goes to hell when the Japanese bomb Pearl Harbor. Eventually, we see her make it in radio thanks to her dedication and her diction lessons.

Radio Days, as mentioned above, is shown through the haze of fond memory, and so there is a real tenderness to the stories being told. It’s obvious that Allen loves this material and cares about not only remembering it as well as he can, but presenting it to his audience as favorably as he can. He wants us to enjoy these stories and the personalities behind them as much as he does.

With a director as prolific and as talented as Woody Allen, it’s difficult to pick a favorite, but of all his films, this is one of mine. As with A Christmas Story, the real pleasure here is in the ridiculousness of the stories, like Abe’s disastrous encounter with the communists living next door or Bea’s crush on the man who reveals himself to be gay. The film is also beautifully acted and nearly perfectly cast from front to back. It’s a film made with a tremendous amount of love, perhaps only The Purple Rose of Cairo is as much a love letter to his past as this one.

If you haven’t seen it, see it. I can’t imagine someone not being entertained by this film.

Why to watch Radio Days: Nostalgia nestled perfectly between Amarcord and A Christmas Story.
Why not to watch: I really can’t think of a reason.