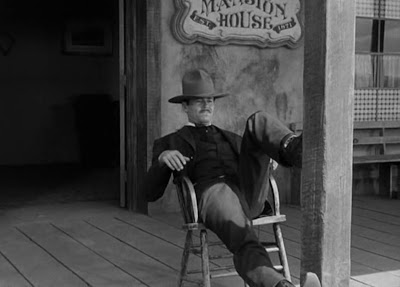 Some time ago I watched Gunfight at the O.K. Corral, which I remember most from its awful, awful theme song. John Ford’s My Darling Clementine is the same basic myth—Wyatt Earp and Doc Holliday team up to shoot it out with the Clanton family near Tombstone. This is one of those cultural myths that always changes a little with the retelling. Most of the versions are essentially tall tales. This event is a piece of American folklore, and so an accurate retelling is not going to happen, especially coming from Hollywood in the mid-1940s.

Wyatt Earp (Henry Fonda) and his brothers are leading a herd of cattle across the desert on their way to California when they are accosted by an old man (Walter Brennan) and his boys not too far from Tombstone. The old man proves to be the patriarch of the Clantons and he offers to buy up the cattle, but is politely refused. Hearing that Tombstone is near, three of the Earps head off to town for a shave and a drink, leaving the fourth, James (Don Garner) to tend to the herd.

In town, getting a shave proves to be a problem as a drunk starts shooting up the town. Wyatt Earp stops him and is immediately offered the job of marshal, which he refuses. Eventually, the Earp family returns to their camp and finds their cattle gone and James dead. No longer having a reason to head off to California, they decide to stay and Wyatt accepts the lawman job. It’s no secret that their cattle are now in the possession of the Clantons and that the Clantons are the ones who killed young James, and from this point forward, we’re going to experience a slowburn on this feud until it erupts at the end.

Eventually, our other main player, Doc Holliday (Victor Mature) returns to town and meets up with Wyatt. The two form an uneasy friendship and an equally uneasy rivalry that seems to be focused on the two women in the picture. The first is Chihuahua (Linda Darnell), a saloon singer who proudly proclaims herself “Doc’s girl.” The second is Clementine Carter (Cathy Downs), the source of our film’s title and Doc’s former flame from Boston. It’s evident throughout that Doc in particular is torn between these two women, and that there’s some attraction between them and Earp as well.

Of course there’s more shootin’ and killin’ and eventually we get to the big shootout at the O.K. Corral, which is what we all paid our money for in the first place.

My Darling Clementine is legend building and myth making, and as such, there’s not really any thought toward historical accuracy. That would be okay if there was any other reason to recommend the film, but there really isn’t. It’s a pretty standard Western from the golden age of the genre. We see small hints of anti-heroes to come in Doc Holliday, but even that is explained away by his involvement with the two women.

I’m fine with the lack of historical accuracy. For my money, the best film about this legendary battle is the completely inaccurate Tombstone. What it lacks in facts it makes up for with great one-liners and Kurt Russell’s epic mustache. Tombstone didn’t really try to be anything but a new retelling of the same story, but it had something that My Darling Clementine lacks completely—a sense of fun and adventure. There’s nothing close to the moment in Tombstone when Kurt Russell threatens to turn a man’s head into a canoe nor any line as memorable as Val Kilmer drawling, “Ahm yaw huckleberry.” This film, sadly, is tepid myth making because the characters aren’t big enough or broad enough to feel worth of being legends. It all feels so bland.

My Darling Clementine isn’t a bad movie; it’s just not a very exciting movie and a film about a giant gun battle should be exciting. It’s got a great cast, too, but they aren’t given that much to do or that much to work with. I know there are a number of chess moves as the Earps look for ways to stop the Clantons and the Clantons look for ways to kill off the lawmen, but I simply couldn’t muster up the will to care that much.

Even Walter Brennan playing a bad guy instead of his typical wisecracking sidekick falls flat because Brennan isn’t in the film enough to really milk the role. At the end, nothing here was worthy of applause or a fist pump. Instead, it got a shrug and I pressed rewind. It’s not bad. It’s just not that good.

Why to watch My Darling Clementine: Walter Brennan plays a bad guy.
Why not to watch: If you want historical inaccuracy and fun, watch Tombstone.