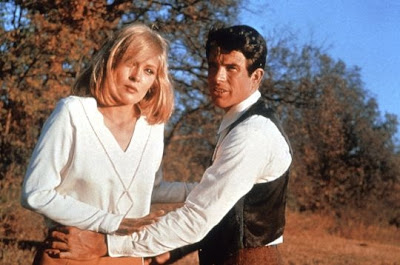 For whatever reason, filmgoers have a fascination with people who commit crime. For years, I could guarantee that someone in every class I taught claimed Scarface as his (it was always a guy) favorite film. The Godfather and its sequel are legendary films in their own right—great films, but legend in no small part because of the subject matter. British crime films are fun and violent, and there are many worth seeing. Few films epitomize America’s love of their criminal heroes as Bonnie and Clyde.

Bonnie Parker (Faye Dunaway) and Clyde Barrow (Warren Beatty) meet when it becomes evident that Clyde is trying to steal her mother’s car. There’s immediate sexual tension between them, in no small part because of Bonnie’s nudity at the time, and the two wander off together. Clyde admits to having been in prison, and proves his criminal past by showing her his gun and robbing a store. They drive off in a stolen car, and the crime spree is on.

It’s not too long after this that they pick up the third member of their gang, C.W. Moss (Michael J. Pollard), who did a stretch in juvenile and knows something about being a mechanic. Not too long after this, Clyde’s brother Buck (Gene Hackman) and his wife Blanche (Estelle Parsons) join up, and things really swing into high. The gang robs banks, steals cars, and gets into firefights with the police across a huge swath of the country, leaving a trail of dead police officers and a growing legend.

Along the way, the group manages to temporarily capture a Texas Ranger named Hamer (Denver Pyle) and take an embarrassing photograph with him, pretending that he’s their friend, and distribute the photograph to enhance their legend. Their reality is quite different, though. The quintet is actually desperately poor, making almost nothing off any robbery, living hand-to-mouth in cheap motel rooms or sleeping out in the woods. We learn a few other important things as well. For instance, it’s evident that for all of her sex appeal, the relationship between Bonnie and Clyde is unfortunately platonic, mostly due to Clyde’s impotence. We learn that Buck Barrow is possibly crazier than Clyde. We learn that Blanche is useless in a firefight and mostly just gets in the way. The main thing we learn and keep learning throughout the film is that Bonnie and Clyde really aren’t that good at what they do.

What I mean by that is that they are amateurs. They are fearless (except for Blanche) and remorseless (eventually including Blanche), but they just aren’t very bright. Over and over, they get away through guts and luck rather than planning, and more than once they get a tail put on them because of a stupid mistake, like carrying a pistol into a chicken restaurant.

Allegedly, Francois Truffaut was originally hired on as the director and then the film was offered to Jean-Luc Godard. Neither directed it, but Arthur Penn certainly used quite a bit of French New Wave in the creation of it. Part of this comes in the editing. More impressively, it comes in sudden jump cuts in tone, switching from moments of comedy to violence and back again without warning. This is what made the film controversial and also what makes it as good as it is.

What really makes Bonnie and Clyde tick, though, is the characters themselves. Bonnie and Clyde themselves are easy to like, mostly because they are played by charismatic actors who work great together on screen. However, for my money, it’s Michael J. Pollard who makes the film what it is. It’s a masterful piece of acting on his part, playing both a member of the Barrow gang and a sort of worshipful admirer of both Bonnie and Clyde. He sports a tattoo late in the film, one he got at Bonnie’s insistence. When he confronts his father over the actions of the pair and their leading him astray, he refuses to believe any power on Earth can capture Clyde. He’s both a member of the team, sporting a machine gun and blasting away at the police and a sort of reverent follower just trying to make his masters happy.

The most controversial part of this film is the hyper-violent ending, and with reason. While it wouldn’t be too controversial today, in 1967, it was something other than else. Chances are very good that you know what the ending is already—I knew what was coming despite never having seen this before today. It’s like the shower scene in Psycho or the giant rolling boulder in Raiders of the Lost Ark; even if you haven’t seen the film, you know the reference.

If there’s any real issue I take with the film, it’s the Hollywoodization of the actual story. In the final analysis, though, it’s accurate to a point, compressing two real gang members into the character of Moss and creating a rivalry with Hamer that didn’t actually exist. I can live with it, though, when the end product is as memorable as this one.

Why to watch Bonnie and Clyde: It’s a legitimate American classic.
Why not to watch: The screen legend doesn’t match the reality