So let’s talk for a moment about Agnes Varda, a director I’d never heard of three years ago who has, since that time, become one I like quite a bit. Both of today’s films come from her, but as is frequently the case when looking at the films of a particular director, they have more in common than just who directed them. Both of these films deal in a specific way with women who are lost in some way, women who seem to be searching for something they are unable to obtain. 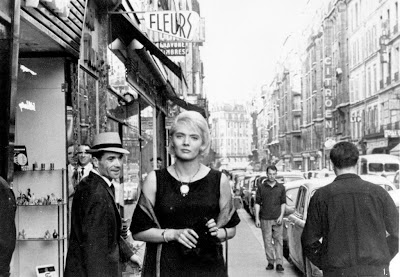 The first, Cleo de 5 a 7 (Cleo from 5 to 7) is in many ways the more explicit in terms of meaning and searching. Cleo (Corinne Marchand) is a pop singer with a couple of successful singles being played on the radio. However, she has been ill of late, and is particularly worried about a series of tests recently done by her doctor. The is to get the results of those tests later in the day. The film opens as she is having her tarot cards read. It’s important to pay close attention to all of the readings that are done here, because they accurately follow the plot of the film (more on this in a bit). The news she gets from the fortune teller is not good, and when she leaves, the fortune teller confides in us that she has seen cancer in Cleo, and that she is doomed.

The entirety of the film, which runs in slightly less than real time, is the next two hours of Cleo’s day, the 5 to 7 of the title. At 7:00, she can get the results of her medical tests. In those two hours (which take about 80 minutes or so), we get a sense not only of Cleo’s day, but of Cleo’s life. In a very real sense, her entire life plays out in this time, and as mentioned above, it follows the map laid out by the fortune teller almost perfectly. The film is divided into short chapters, each one taking a set portion of the time between 5:00 and 7:00, and each containing a significant event or encounter with a specific person.

This is in many ways a daring film. Varda lays out the story for us in the beginning and yet still compels us to watch it all the way through by making Cleo’s life completely engaging. One of the more engaging aspects of the story is how frequently things come back around to the current situation that Cleo is experiencing. Frequently, we wind up with visions or themes of both death and cancer. With her friend Dorothee (Dorothee Blanck), she visits a film projectionist who invites them to watch a silent short. In the short, the woman on screen (Godard favorite Anna Karina) parts from her boyfriend (Godard himself). He puts on sunglasses, and sees her fall and die comically, and witnesses her driven away in a hearse. When he takes off his glasses, he realizes that they made everything “dark.” She’s actually just fine. It’s no coincidence that in this role, Karina looks a good deal like Cleo.

Another such instance comes earlier in the film when her songwriters appear. They offer her several different songs, but finally decide to give her one that they suggest is perfect for her. It’s a sad, slow number, filled with images of death and regret, a song about a life cut off too short and left unfulfilled. Typically, for Cleo, it would be a song, but on this day, it feels very much like a portent, and too close to reality. A broken mirror, easily passed off as a minor accident any other day, similarly becomes a herald of death.

These constant references—snatches of conversations, the realization that it is the first day of Cancer in the zodiological calendar—are a way of referencing this same phenomenon in life. Things that we would easily skip over on any normal day suddenly become relevant because of a different event. In short, our world is filled with coincidence, but our specific frame of reference frequently gives those coincidences meaning. It’s the first time I’ve seen this concept so brilliantly portrayed on the screen.

The short film in the middle plays a larger role, too, since it also seems in many ways to presage the two possible fates of Cleo. We learn of her diagnosis at the end of the film (I won’t reveal it, but I’ve already said that the fortune teller is pretty much spot on with everything, so it’s not hard to guess), and the two possible paths of Karina’s character appear to be the two possible paths for Cleo. Everything—her future, what she sees around her, the continuing relationship with Antoine (Antoine Bourseiller), the young soldier she meets on the day he leaves for Algeria—appears to depend on the way in which she decides to view it.

If I have an objection, it’s the same one I have with many films that tread some of the same path. Belief in the supernatural is always rewarded in film. Prophecies always come true in one way or another, and anyone who spins the future invariably gets it right. Cleo’s maid/assistant (Dominique Davray) is superstitious, and it appears that all of her superstitions are completely founded and backed up by reality. Just once I’d love to see a skeptic be right. 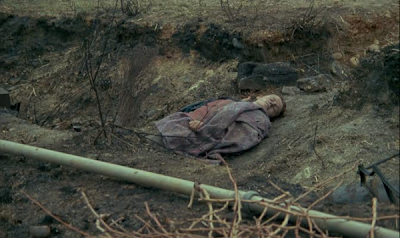 With Vagabond, the knowledge of how the film ends is far more explicit at the beginning. A minute or two in, a man discovers the body of a young woman frozen in a ditch. The body appears to have died a natural death—there is no evidence of any sort of foul play. The police and a few bystanders theorize that she may have fallen and knocked herself unconscious, and then died of exposure in the night. The rest of the film concerns the last few days of this young woman. Much as with Cleo de 5 a 7, we learn of the entire life in the snapshots we are given.

The young woman is Mona Bergeron (Sandrine Bonnaire). As the film progresses and we see her various experiences on the road, we learn quite a bit about her. She is a vagrant, moving from place to place without purpose or intent, simply traveling. Much of the film is told not from the standpoint, but from the many people who, in one way or another, encountered her during her travels. She spends time with a botanist of some sort, for instance, a woman who has dedicated her life to eliminating a fungal infection endemic in plane trees. She lives for a time with a goat herder and his family. She claims to want to plant potatoes, but when the field is plowed, she does nothing. She lives with a man named Assoun (Setti Ramdane) who tends vineyards, but is eventually kicked out by his co-workers. She lives with another vagrant in a semi-abandoned house for a bit, but moves on when the house is robbed.

We see her experience, and then get a few comments from those who met her. Sometimes, this is a conversation between a couple of people. Other times, it appears as if the person in question is being interviewed. Part of the genius of Sans Toit ni Loi is that these remembrances are not specifically in order. We jump back to a number of them minutes after she has moved on.

Just as I am put in mind of other films with Cleo, Sans Toit ni Loi reminds me very specifically of two other films. First is Varda’s own Glaneures et la Glaneuse, since the lifestyle seems so similar in so many ways. Mona lives by scrounging, by finding odd jobs and working as little as possible, and by finding rides to somewhere new as well as she can. She has no attachments, leaving someone she travels with temporarily as quickly as she can. Offered a ride at one point, but only for her, she leaves with nothing more than a goodbye and continues on her way.

I’m also reminded of Into the Wild, which of course was released a couple of decades after this one. There is a natural similarity in the main character’s complete rejection of the sort of typical life that virtually everyone else in the film is leading. With that film, though, there is far more purpose in the main character’s actions. Here, it almost seems as if Mona has dropped out of society simply because she has decided that there is nothing else for her to do. She has no purpose in becoming a vagrant other than it’s easier than working and staying in one place.

The real question of the film, of course, is how we will get back to the beginning and Mona’s frozen corpse on the side of the road.

Of the three Varda films I have seen, I think this is the one I like the least. A big part of that is the character of Mona herself. She seems like such a complete waste, like such a total cipher. She seems to have no opinions on anything other than wanting cigarettes, a ride, and marijuana when she can get it. There’s no purpose behind her wandering other than that if she weren’t lost somewhere in the countryside, she’d be lost somewhere in a city. She’s a discarded soul, but unlike many of those who find themselves without a home, a job, a family, and a place to go, Mona discarded herself. I find that a difficult position with which to sympathize.

Why to watch Cleo de 5 a 7: A completely relatable and meaningful experience.
Why not to watch: How come skeptics are always wrong cinematically?

Why to watch Sans Toit ni Loi: A unique portrait (for its time) of someone not merely on the fringes of society, but who has left society almost entirely.
Why not to watch: Dirty, dirty hippies.