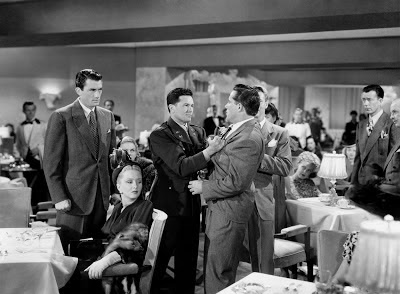 The latest batch of Oscar nominations were announced a few days ago. It’s at times like this that phrases like “Oscar bait” are bandied about. A nicer way to put this is “message film.” When the discussion comes to this topic, 1947’s Best Picture winner, Gentlemen’s Agreement is one that should come to the forefront. This is a message film in the original sense of the phrase, a film that exists not to tell a story but to hammer a particular message home into its audience.

Widowed magazine author Philip Schuyler Green (Gregory Peck) has moved from California to New York with his son Tommy (Dean Stockwell) and his mother (Anne Revere) to work at a national weekly magazine. His boss, John Minify (Albert Dekker), wants him to do an exposé, a multi-part story taking a serious, in-depth look at anti-Semitism. Phil struggles with the story. He realizes that in the past when he had a story like this to write, he tried to live the life he was looking at. He did a story on coal miners, so he became a miner. So he decides that to truly understand anti-Semitism, he’ll tell everyone he’s Jewish and really experience it.

The ploy actually makes some sense. He’ll get an insider’s view of the problem. Even better, with his family’s recent move to New York, no one really knows him, so claiming to be Jewish will be “true” in the sense that almost no one will know differently. A few people will, of course. First is Minify, his boss. Naturally his mother knows, too. The other person who does is Kathy Lacey (Dorothy McGuire), Minify’s divorced niece and the love interest of Phil. Out of the necessities of plot, Phil and Kathy become engaged.

What Phil discovers is that anti-Semitism is not specifically what most people might think. It’s far more subtle than name calling and not being able to get into a particular resort or hotel, although that happens quite a bit. We he discovers is that the real problem isn’t the people who are obvious racists, but the people who offer tacit approval by not speaking out against it. This happens over and over, particularly with Kathy, which naturally creates a great deal of tension between them.

An added aspect of this is Phil’s longtime friend Dave Goldman (John Garfield). Dave is leaving the military and has a line on a good job in New York, and so moves in with Phil and his family to look for a place to live. In what can only today be describe as irony, the Jewish Dave Goldman can’t find a house or an apartment willing to rent to a Jew in New York, but that’s all a part of the story being told. Additionally, we meet Anne Dettrey (Celeste Holm), the fashion editor of the magazine. Anne is completely accepting of Phil, who she believes to be Jewish, and of Dave, who is. She’s also not too unsubtlely interested in Phil.

There’s a lot going on here, but the screenplay is good enough that nothing gets lost. We get all of Phil’s frustrations as the film goes on, and we also understand exactly why he’s so disappointed with Kathy. One of the great moments comes when Tommy is the victim of namecalling by some local boys. When he comes home, upset at being called a number of ugly names, Kathy reassures him that it’s okay because he’s not Jewish, so the words aren’t true. There’s no indication from her that it’s wrong because it’s inherently wrong. When Kathy’s sister throws a party for the pair, people seem to accept Phil’s “Jewish” heritage, but a number of people simply don’t show up for the party, another form of subtle racism.

Gentlemen’s Agreement, in addition to winning Best Picture for its year, won a few more Oscars and was nominated for a bunch as well. Most impressive, Gregory Peck, Dorothy McGuire, Celeste Holm (who won) and Anne Revere all received nominations for acting (the latter two for supporting roles).

Don’t get me wrong—this film is filled with message, and when it’s time for the message to come in loud and clear, Gentlemen’s Agreement comes in for the kill, laying it on thick and fast. When the plot becomes secondary to the message being offered, director Elia Kazan is more than happy to let his characters preach or become justifiably outraged.

But even so, this is a script that manages to overcome this obvious emotional manipulation. In another key scene, Phil discovers his secretary Elaine Wales (June Havoc) is working under a false name. she applied for her position with her real (Jewish) name and was told there were no positions available. Under a false name, though, she was hired right away. Phil alerts Minify to the situation, but when Elaine discovers this, she has issues. See, she doesn’t want the wrong sort of Jew to be hired, because it will give them all a bad name, evidence that she has internalized the anti-Semitism that she experiences.

So in the end, Gentlemen’s Agreement is a bit too preachy for a modern audience, but it’s far less so than one might expect when encountering a film that is so obviously one that exists for its message more than its story. It’s still quite effective. The ending is a little disappointing and a little too pat. I’d have liked to see Phil go in another direction at the end (those who’ve seen the film will know what I mean), but I guess I can’t ask for everything.

Why to watch Gentlemen’s Agreement: A realistic, well-acted message film with a good message.
Why not to watch: It’s still a bit heavy handed in places.