I have to admit that I’m enjoying having both Turner Classic Movies and a DVR again. TCM seems to show a lot of great movies at odd hours, making them perfect for recording. I snapped up The Wrong Man the other day when I knew no one in the house would be awake to object, and since my NetFlix film showed up damaged, I figured I may as well get to this one. On a more personal note, I had been carefully doling out the Hitchcock films, not wanting to see all of them right away. As it turns out, I now have more John Huston on the remaining list, so perhaps I haven’t been as careful with the Hitch as I intended. 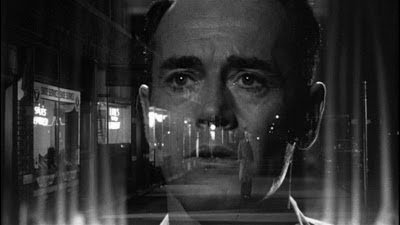 Anyway, unlike most Hitchcock films, this one is actually based on a true story, and while there’s a little bit of license here and there, it sticks mostly to the actual story that happened. Manny Balestrero (Henry Fonda) is a bass player at the Stork Club. He leads a pretty simply life without the glamour that many might think he lives with. He has a wife and two kids and pretty typical bills and problems. The current issue is his wife Rose’s teeth (Vera Miles), which need a $300 wisdom tooth removal.

Manny figures that while they’ve borrowed against his insurance policy in the past, they’ve never borrowed against hers. He takes her policy to the insurance office, and the people act quite strangely. What we learn (and Manny doesn’t) is that he evidently looks a great deal like the man who robbed the same office recently. The string of hold-ups includes a number of nearby stores, too. When Manny is picked up by the police, he’s paraded in front of a number of store owners who identify him as the hold-up man. Worse, when he is asked to take dictation of the perpetrator’s hold-up note, he misspells the same word as the real criminal.

This starts a nightmare for Manny, as he is railroaded through the judicial system with everything stacked against him. It seems as if nothing will set the record straight and that his life is doomed to be ruined by a freak resemblance to a wanted man.

There’s no doubt in my mind that this story attracted Hitchcock because of its similarities to many of the films he made in his career. Hitchcock loved mistaken identity tales where an innocent patsy was thrown into danger or hardship because of circumstance and freak chance. For instance, both The 39 Steps and my favorite North by Northwest have this idea at their cores. That this is based on a real story is only icing on the delicious cake.

One thing the film absolutely has going for it is Henry Fonda. At this point in his career, Fonda had been in a ton of movies, and in by far the bulk of them he played a nice, decent person. His greatest role of this sort is probably in 12 Angry Men, released the year after this one, but still, he was America’s everyman in film, a decent Joe. It’s easy to accept him as a man wrongfully accused and fighting for his own life. It’s easy to put ourselves into his shoes, because Henry Fonda tended to portray the kinds of people we’d like to think of ourselves as.

What’s really missing from this film is a strange lack of tension. Bernard Hermann’s soundtrack does the best it can to ratchet up any tension it can, but it just can’t really get there. And this might well be the fault of Henry Fonda, too. It’s so easy to think that Henry Fonda is always going to end up on top, that I couldn’t help but think that things will somehow work out for Manny Balestrero as well. At least this is true in terms of the case itself. In the third act of the film, Rose Balestrero starts to lose it far more than Manny does. She becomes depressed and paranoid, and this is almost terribly real, and much more in line with the Hitchcock that people are used to seeing.

The Wrong Man is a difficult film to dislike entirely, but it’s a film I couldn’t quite love all the way through. I like the dark turn in the last half hour, but for the life of me, I never really felt that Manny was in any serious danger. That’s what I wanted to feel, and I just couldn’t get there.

(Final note: As this was the second damaged disc I’d received in less than a month, I decided to call NetFlix and see what the deal was. The person I spoke to was very nice and did the right thing—she not only arranged for a replacement disc, she also sent me the next two discs on my queue. Smart customer service when problems get handled, and the customer is happy without having to beg for anything. Good work, NetFlix!)

Why to watch The Wrong Man: Henry Fonda and a dark third act.
Why not to watch: It should be far more tense than it is.