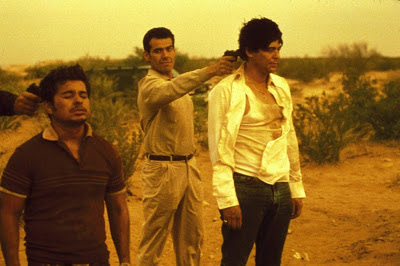 I know that taking down my Christmas decorations on January 20th puts me a week or so behind when many pull down the fake evergreen branches and put away my Santa C’thulhu, but today was really the first chance I had. Knowing that I had to carefully wrap and pack a bunch of stuff, I wanted to watch something long and involved to keep me interested. So Traffic seemed like a pretty good choice. It’s close to 2 ½ hours long and interweaves three distinct plots, so I knew I’d be able to watch the whole thing in the time I had and I’d have enough to keep myself occupied while my hands got covered in newsprint.

Traffic, one of two of Steven Soderbergh’s films nominated for Best Picture in 2000, is a drug story told from multiple perspectives, focusing on a trio of overarching stories. These three stories tie together in a number of aspects, each bleeding over into the others, mixing characters and events. One a deeper level, the three main stories are really just aspects of the same overall story, which is an indictment on the American drug war and its many, many consequences.

One story, which I’ll call “Mexico,” features the drug war in Tijuana. Police officers Javier Rodriguez (Benicio del Toro) and Manolo Sanchez (Jacob Vargas) work to destroy the Obregon drug syndicate. They are soon recruited by General Salazar (Tomas Milian) to work for him in the same war. As they dig deeper, they begin to realize that Salazar is working to crush the Obregons because he is working for a rival drug syndicate that wants to move into Tijuana, so his war is more or less a business venture and an effort to wipe out the competition.

The second story, “California,” is similar in a lot of ways. Police officers Montel Gordon (Don Cheadle) and Ray Castro (Luis Guzman) are also working on bringing down the Obregon syndicate. Their first move is to take down dealer Eduardo Ruiz (Miguel Ferrer), who in turn leads them to Carlos Ayala (Steven Bauer). Ayala’s arrest causes huge problems for his wife Helena (Catherine Zeta-Jones), who finds herself becoming more and more involved in the drug business to keep her family safe and to get her husband out of prison.

The third story, in some ways the main story, concentrates on the life and family of an Ohio judge named Robert Wakefield (Michael Douglas). He has recently been appointed as the new drug czar under the (presumably) first G.W. Bush administrations. However, unknown to him, his daughter (Erika Christensen) has been a long-time casual user and has developed a serious addiction to freebasing heroin.

The three stories are all intertwined, as makes a certain amount of sense. The drugs come in from Mexico, supplied through people like Eduardo Ruiz and Ayala, provided the Mexican police can’t stop them. Those same drugs eventually end up in the body of Wakefield’s daughter. Rodriguez and Sanchez deal with the American DEA, which also deals with Wakefield. And everyone is hunting after Obregon (Benjamin Bratt). Each move, each double-cross pulls strings in each of the other stories. Ruiz’s betrayal of his bosses causes him to have a price on his head, but his would-be assassin has his own past and enemies, too.

In a lot of ways, Traffic is a film I like getting involved in watching, but hate having to review. There’s so much going on and so much intricacy in the plot, that even just summarizing takes so much time and so much explanation that it’s difficult to feel like it’s even worth it. The real question here, though, is whether or not Soderbergh manages to keep all of the balls in the air. He does. It’s surprisingly easy to keep everyone straight and follow each of the different stories.

Naturally, this film is helped tremendously by a stellar cast. There aren’t a lot of weak points here. The list above is very much a partial one—there are plenty of smaller roles (and a few important ones) filled by recognizable faces, all doing some excellent work. These various characters are all portrayed very much as real, three-dimensional people, and this helps the film significantly as well.

Where it falls short, and it does only a little, is in its heavy-handedness. This is to be expected, really. Any message film’s biggest potential problem is that it always runs the risk of pushing the message just a little bit too much or hammering it home once or twice too often, and Traffic can’t resist the urge. In the Drug Czar story, for instance, Wakefield’s daughter becomes such an addict so quickly that it’s not long before she’s skipping out of rehab, stealing her parents’ possessions, and turning tricks to feed her heroin habit. It’s too Requiem for a Dream-y in that respect. I know that this is the entire point of this story—a sort of family hypocrisy of father fighting the drug war while the daughter is fighting for the other side, but still, it’s a step or two shy of a Lifetime movie.

But even this is pretty mild criticism for a film that manages to be this compelling. The reason for that is that the “drugs are bad” message isn’t really the only message of the film. It would very much be my contention that Soderbergh is telling multiple stories here because he has multiple points. One of them, expressed in a sense by Seth Abrahams (Topher Grace), the guy who hooked Caroline Wakefield on smack, is that the drug war is a complete failure. While stated far more explicitly elsewhere, his speech essentially says that drugs are readily available and offer a massive profit incentive to anyone who wants to deal them, and the disincentives are minor in comparison.

So sure, drugs are bad, but so is fighting against them in a way virtually guaranteed to fail. This gets mentioned subtly throughout, whether by government officials stating that the criminals are always one step ahead because of budgets or the Mexican government having no plans or programs for the treatment of addicts in place. Ultimately, Traffic isn’t asking us why we’re fighting or even if the battle is worth fighting, but if we are not simply throwing money down a hole at a problem that cannot be defeated with the methods we’ve always used.

Why to watch Traffic: A drug story from perspectives we don’t often see.
Why not to watch: A bit preachier than it needs to be.