As should be evidence by the format line above, we’ve hooked up the cable again after about three years. This is the first time (if memory serves) that I’ve seen one of the films on The List off television. If it’s not, it’s one of the first. I can’t say I’m 100% behind the choice to hook the television back up, but I did miss TCM and I’m glad to have it back. 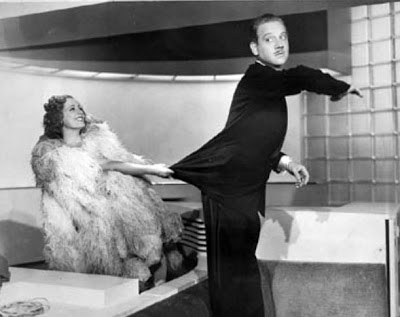 When I step into a screwball comedy, I’m never sure what to expect. I love some screwballs and there are others that I just can’t abide. The more I watch them, the more I realize what it is that I like about certain ones and dislike about others. In general, I like films that are about smart people. There’s no attraction for me to stupid characters, and often, screwball comedies are loaded with self-absorbed characters who (because they are in screwball comedies), act in the dumbest way possible. Fortunately, this is not the case with Theodora Goes Wild. I get these characters, and the film works for me because of it.

In the small New England town of Lyneville, the local newspaper publisher (Thomas Mitchell) has purchased the serial rights to the latest immoral novel by a woman named Caroline Adams. The town, of course, is scandalized by this, and the leading citizens, spinsters Mary (Elisabeth Risdon) and Elise (Margaret McWade) Lynn and their niece Theodora (Irene Dunne) lead the charge against getting the publisher to stop printing it. Of course, the real issue here is the identity of Caroline Adams. Naturally, this is Theodora herself, and she is desperate to keep the secret. She heads off to New York to visit her scandalous uncle (Robert Grieg) and visit her publisher (Thurston Hall).

While visiting the publisher, Theodora encounters Michael Grant (Melvyn Douglas), who created the art on the cover of her book. He’s obviously curious about what’s going on in Theodora’s world, so when she heads back home, he follows her. He poses as an out of work gardener and forces his way into Theodora’s life in an effort to get her to break out of her personal rut. And (of course), she falls for him and discovers that he has a past as well. Michael is the son of the state’s lieutenant governor, and is also married. His marriage is on the rocks, though, but has committed to staying married to keep his father’s administration from the pain of a scandal. Now free of her own restraints, Theodora decides to do the same thing for Michael that he has done for her.

So it’s a pretty simple plot, which is exactly what a screwball comedy really needs. They should be simple on the surface, but convoluted underneath once everything gets rolling, and the paragraphs above are really just the vague outlines of the story. But the main attraction for me here is that these are smart characters. Theodora does go wild, but she does so intelligently and with purpose, and she’s a real charmer.

It’s also really funny. There are some great moments here that work really naturally in the flow of the story. For instance, hoping to keep up the sham of his marriage, Michael and his wife Agnes (Leona Maricle) go to a reception for the governor. Theodora, who has decided to make her actual identity known to the world and has already been connected to the possible divorce of her publisher through a misunderstanding, crashes the party. She turns on the charm and dances with the governor, allowing her picture to be taken frequently, since even though the governor doesn’t know who she is, the press certainly does. Then she allows herself to be caught in a clinch with Michael, which puts additional pressure on Michael’s already crumbling marriage.

This is fun stuff, the sort of good-natured film that people really needed in the heart of the Great Depression. More importantly, it’s a film that has managed to translate to the modern world pretty well. Move the town in question from the staid New England of 80 years ago and transplant it to somewhere in the Bible Belt, and a lot of the opinions, attitudes, and tendency to gossip about the shame of other people still works. In fact, it’s probably the same in a lot of small towns around the country, Bible Belt or not.

I really enjoyed this film, and I’m happy that I saw it was playing. Totally worth seeing the next time Turner decides to show it.

Why to watch Theodora Goes Wild: It’s fun and cute as hell.
Why not to watch: For a wonder, I can’t think of a good reason.