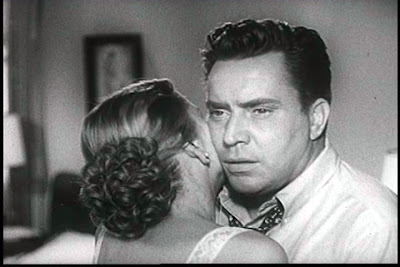 Frequent readers of this blog will probably know that one of my favorite words is “lurid.” Three years ago, I wouldn’t have known what I’m about to say—I love the lurid stuff. Evidently, the more lurid the film, the more I seem to like it. So when I suggest that The Bigamist is that special sort of lurid that only seemed to exist in the late 1940s and the 1950s when the same stuff that happens now happened, but no one was really able to talk about it. That’s what makes it so damn fun—it’s the tiptoeing around the actual subject that makes it seem so much more prurient and dirty.

There shouldn’t be a big shock when the plot twist reveals itself about a quarter of a way in. After all, this film is called The Bigamist, so learning that traveling salesman Harry Graham (Edmond O’Brien) has two wives should be expected. We start with him and his first wife, Eve (Joan Fontaine). They are unable to have children and are looking to adopt. Mr. Jordan (Edmund Gwenn) works for the adoption agency and tells them they must both expect him to dig thoroughly into their private lives, something that appears to visibly shake Harry.

Harry spends a lot of his time in Los Angeles, so when Mr. Jordan tracks him down there, things get…interesting. He’s unable to find a hotel where Harry is staying, and eventually finds a “Harrison Graham” in the phonebook. He shows up at the house and finds not only Harry Graham, but also (naturally) a second wife and a child (insert dramatic music cue here). And then the whole sordid story comes pouring out of Harry like a flood, and much of the rest of the film comes in flashback form.

In LA on business, Harry found himself more lonely than he’d ever been. Discovering she couldn’t have a child turned Eve into a work machine, and she increased the profits of Harry’s business like mad. But there was an emotional distance starting to drive between them. Bored, Harry hops onto a bus tour of the homes of the stars. This is where he meets Phyllis (director Ida Lupino). The two talk and get along well. Harry invites her to dinner and she takes him to a knock-off Chinese restaurant where she works. There’s a touch of romance here, but not a ton. After all, Harry is a married man.

But eventually, Harry can’t resist himself. Eve continues to be emotionally distant from him and Phyllis is just so appealing that eventually he succumbs to temptation. Distraught, Harry stays away from LA for months until work finally forces him back. Based on what we already know about him, it’s not a shock to discover that Phyllis’s sudden “illness” is actually a pregnancy. And, honorable man that he is, Harry marries her despite already being married, and thus giving us the title of the film.

This is an interesting one for a number of reasons. It is, as I mentioned at the top, a lurid, sordid little film, which is one of those things that gets people to come see a low-budget picture like this one. But it’s a lot more than that. This is really a sympathetic film. Every decision Harry makes may well be the wrong one or a bad one, but they all make sense to him, and make sense to us watching. He tries, over and over, to do the right thing, but is prevented not because of weakness of character but because of his inability to hurt either of the two women he loves. It is a form of weakness, but one driven by compassion rather than something more self-serving.

The strongest part of the film, though, is not Harry’s character, but the characters of his two wives. Harry’s indecision and inability to make a clean break from either woman is completely believable because both women are great, vibrant characters. Joan Fontaine’s Eve comes off as a bit officious and prim, perhaps, but she’s genuinely in love with her husband and understanding of his life on the road. Ida Lupino’s Phyllis is tougher and rougher around the edges, and appealing because of it rather than in spite of it.

The script has a great deal of fun with the fact that Edmund Gwenn plays a major role. Early in the film, Eve comments that since he is the man who will help them adopt a child, he’s just like Santa Claus, an obvious reference to Gwenn’s most famous role in Miracle on 34th Street. Later, on the star tour, they drive past Gwenn’s house, which is explicitly called out.

Ultimately, the reason that The Bigamist works so well is that it’s a lurid topic, but not a lurid film. People may well have shown up to see this because they knew it was going to be a little bit dirty, something to snicker at in the back rows of the theater. Instead, it’s a human story told with compassion and a great deal of heart, and that makes it something worth seeing, maybe even twice.

Why to watch The Bigamist: A sympathetic portrait of a non-sympathetic character.
Why not to watch: The melodrama is thick enough to cut and spread on toast.