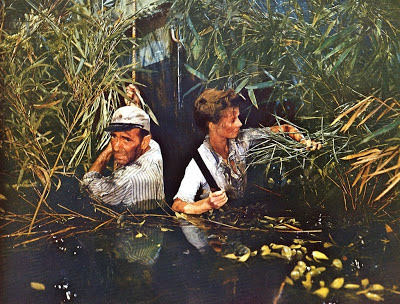 If you’re a huge fan of The African Queen, you’re not going to like some of the things I say about it. I don’t dislike this film, as a matter of fact, but I also don’t think it specifically worthy of all of the accolades it gets. It’s a fine film, a good little actioner and a grand adventure. What it isn’t, though, is much of the romance it bills itself as. It has some other problems, too. But I want to go on record as saying that this is a film that I do enjoy some. I just don’t think it’s anywhere near the pinnacle of Bogart, Hepburn, or John Huston.

The action starts with the beginnings of World War I in Central Africa, which was controlled by Germany at the time. This was of little importance to most of the people living there, including the Sayers. The Reverend Samuel Sayer (Robert Morley) is a missionary working at converting the natives with his sister, Rose (Katherine Hepburn). Their only connection to the outside world comes in the form of Charlie Allnut (Humphrey Bogart), a Canadian who works on the river on his ship, the eponymous African Queen. The Sayers are very British and very religious, always proper and filed with decorum while Allnut is coarse and crude. Nevertheless, he is tolerated because without him, the Sayers would lose all contact with the world outside.

Allnut tells the Sayers about the war, and shortly thereafter, the Germans show up in their village and set fire to it. This causes a complete mental break for Samuel Sayer, who completely dissociates himself from reality. It’s not actually stated, but I get the impression the loss of his flock gave him something like a stroke. Allnut returns, having lost his crew. Since Rose is now alone, he tells her he’ll do her best to get them out of the area safely.

After a short trip, Charlie pulls the boat off into a quiet area and parks it, telling her that they’ve got plenty of supplies, and that it’s out of the way enough that they can wait out the rest of the war in this spot. The reasons are several. First, the river they are on eventually empties out into a large lake currently controlled by the Germans, thanks to a ship called Louisa. Second, the way down the river is fraught with rapids and other perils, and Charlie is pretty convinced they can’t make it. Rose, however, is adamant that they should try, and that their real goal should not specifically be escape, but the destruction of the Louisa using cobbled torpedoes formed from oxygen canisters, explosives, and rigged detonators. Charlie thinks it’s a stupid plan, but decides to go along with it.

And off they go. The bulk of the film is their trip down the river, their quarrels over her prim nature and his love of gin, and their eventual romance that is sudden and complete. They go over rapids, she dumps all the gin, he survives a massive hangover, she lightens up, and eventually, they make it to the lake, battling insect swarms, ship damage, and leeches. And then, right on schedule, the Louisa shows up and we get a confrontation that leaves us with a Hollywood resolution, but not a real ending.

It’s the romance that’s my biggest objection here. It’s not that I can’t see a romance between Bogart and Hepburn, but that I genuinely can’t see a romance between these two characters, at least not as portrayed here. It seems like a function of the script rather than something that happens naturally in the course of the story being told. It isn’t that the two characters are completely opposite each other. I’ve seen enough films to know that in Hollywood at least, opposites attract, so I expect it. It’s that there’s virtually no emotion between the two of them until the romance actually happens. They needle each other a little, but they don’t seem much attracted to each other or especially annoyed with each other. Then, suddenly, it’s smoochy-time. It simply happens because it has to, because Rose and Charlie are the only two characters on screen for an hour or so.

As for the resolution, it’s a non-ending. I’m going to go ahead and spoil it here, because, well The African Queen has been around for better than 60 years. If you don’t want it spoiled, skip the rest of this paragraph. Also, because this is a film from 1951. If you think for a second that something really bad is going to happen to Charlie or Rose, or that they won’t end up together, or that they won’t contrive a way to sink the Louisa, well, you’re just not paying attention. The Queen sinks, torpedoes in place, and both Charlie and Rose are picked up by the Germans, who plan to hang them as spies. As a last request, Charlie asks the Louisa’s captain to marry them. Then the Louisa hits the Queen, whose bow is sitting just out of the water. Charlie and Rose jump overboard in the chaos and start swimming for the opposite shore. And that’s it—when the film ends, they’re still in the water with the survivors of the shipwreck still relatively close to them. We’re left to assume (I guess) that they make it to Kenya and home, but there’s a part of me that is entertained by the thought of them being trampled by hippos half an hour later.

There is a particular charm to The African Queen that makes up for some of the problems and deficiencies, but not all of them. I can live with the obvious rear-projection and even with the fact that our two principles call each other “Mr. Allnut” and “Miss” for a good chunk of the film. But the basic premise of their relationship is a plot necessity rather than a believable or natural result of their being thrown together, and on that level, The African Queen flatly fails.

Why to watch The African Queen: Do you need more than Bogart and Hepburn?
Why not to watch: I just don’t buy the romance.