Film: The Sting
Format: DVD from NetFlix on laptop. 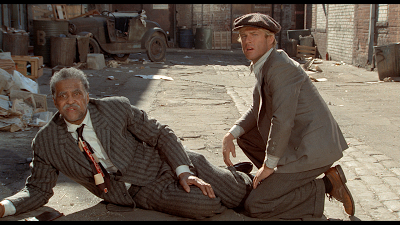 If you were a kid in my house in the 1970s, you watched The Sting. Both of my parents loved this film, and for a wonder, so did I. It’s a difficult film not to like; it plays on a lot of the things that movie audiences have loved for years, does so with an inventive and complicated (but easily followed) plot, and wraps everything up with two of the best actors of their generation playing two of their best characters. Best of all, it never really cheats. The film is always at least one step ahead of the audience (or was in 1973), but it gives us everything we need to not be surprised at the end.

I think people like to be fooled. People tend to like magic shows, not because they think the magic is real, but because they can’t understand how the trick was done. People like mystery stories for the same reason, trying to see through the puzzle at the end and realizing that all of the clues were there for them to pick out the right culprit all along, even if they reached the wrong conclusion. The Sting is exactly like that, offering up a grand con game and conspiracy, throwing in a number of different threads to keep us all guessing. The way everything ties together is there for us the whole time, and really, that’s part of the fun.

Johnny Hooker (Robert Redford) and his partners Luther Coleman (Robert Earl Jones) and Erie Kid (Jack Kehoe) play a little wallet-switching scam on a man only to discover that their mark was someone running the take from the Joliet numbers racket. This means that they have crossed Doyle Lonnegan (Robert Shaw), a man who kills for honor and brooks no competition. Luther says that with this latest score, it’s time for him to quit the grift, but a couple of Lonnegan’s thugs kill him by throwing him out a window. Now with nowhere to go, Hooker searches for Henry Gondorff (Paul Newman), an old associate of Luther’s. Gondorff is an expert in the long con, and Hooker has decided that it’s time to pay back Doyle Lonnegan in spades.

And so the team is rounded up, with the main other players being Kid Twist (Harold Gould), Billie (Eileen Brennan) and J.J. Singleton (Ray Walston). The idea is to take Lonnegan for as much money as they possibly can with a horseracing scam. The basic idea is that they convince Lonnegan that they have a way to cheat the system, and then use that to rob the man blind.

Of course, it’s never that simple. Lonnegan is still on the lookout for Luther’s partner and wants him killed, sending out multiple assassins to do the trick. Included in this group of killers is someone named Salino, evidently Lonnegan’s go-to for difficult cases. Additionally, Hooker is being actively pursued by Lieutenant William Snyder (Charles Durning) for a number of short cons and passing counterfeit money. Throw in the fact that Gondorff is wanted on federal charges, which brings in the FBI, and you have quite a mess of plots, scams, cons, and problems for everyone.

And there is a real joy in that. The Sting is, more than anything else, fun. This isn’t a film that will change the world or suggest solutions to a serious problem, or make people think deeply about issues that concern them. It’s purely entertainment from start to finish—no wonder it uses Scott Joplin’s “The Entertainer” as its main theme throughout. It’s easy to like these characters. While Redford and Newman may be more indelibly stamped on the collective consciousness as Butch and Sundance, I’ll take Hooker and Gondorff any day of the week.

It’s also worth mentioning the costuming, which is tremendous. At the start, after the big score, Hooker runs out and buys a ridiculous suit that he then wears for the bulk of the film. It’s a loud affair that, bluntly, looks great on a guy just coming into his own as a 1970s sex symbol. All of the costumes look fantastic, in fact. It’s easy to buy into the 1930s era based on the clothing styles and the overall setting.

If there’s a knock on The Sting, it’s that it became a victim of its own success. People certainly new about con games before this film came out, but no film really introduced and popularized the idea of a complicated long con to the public before this one. And the public ate it up. Today, you can’t swing a dead cat without hitting a show about con artists or bumping it into a script for grafters pulling off a scam on an unwilling mark. So it’s entirely possible that a savvy viewer today will see all the tricks and twists before they show up.

My advice? Turn off the critical thinking portion of your brain going in. Let this one wash over you if you’ve never seen it before, and enjoy it for what it is—two hours and change of great script, great costumes, great music, and fun performances designed not to enlighten, but only to provide a ridiculously fun ride. And if you’ve seen it before, I’ll tell you now, that it still holds up, even if you do remember exactly what’s going to happen next.

Why to watch The Sting: Long cons make great stories and better mysteries.
Why not to watch: If you’re a fan of the genre, it’s likely the surprises have already been spoiled for you.

Posted by SJHoneywell at 4:58 PM