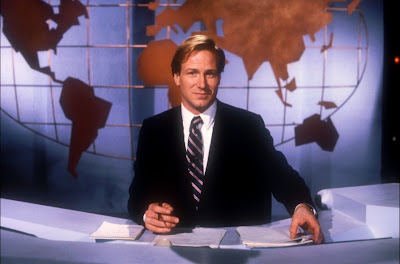 Broadcast News is a perfect example of why I’m rewatching everything on The List before I review it. I wanted a sense of where I am with a film now rather than memory of it, in part to see if my opinion has altered. This is a case where my opinion of a film has improved somewhat over my initial reaction. Don’t get me wrong—I thought this was a well-made film the first time I saw it, but I didn’t like it a lot. I still can’t say that I like it a ton, but I like it more than I did the first time I saw it. I don’t think I saw this in the theater. I remember seeing it with my girlfriend at the time, who was a newspaper reporter. We watched any film that had a reporter angle. We’re married now, she’s not a reporter anymore, so she doesn’t care that much about films like this anymore. I think she liked it more than I did.

Anyway, this is a workplace romance dramedy involving a love triangle that centers around three people who are missing something vital in their personalities. Aaron Altman (Albert Brooks) is a talented, intelligent, connected television reporter who just doesn’t have the charisma to be the focus of a network news broadcast. Jane Craig (Holly Hunter) is smart, tough, and great at her job as a producer, but unable to overcome feelings of physical inadequacy when she compares herself to the more telegenic women she works with. Tom Grunick (William Hurt) looks great on camera, has poise, and takes direction, but he’s as dumb as a post and represents everything that Jane hates in news media. So naturally, these are the three people who will be in one manner or another vying for each other’s affections. Put simply, Aaron has an unrequited crush on Jane, who is taken with Tom’s looks but repelled by his ignorance while Tom is attracted to Jane but intimidated by her knowledge and skill.

I had forgotten that this film had such a stellar cast aside from the three leads. The lead network anchor for the station in question is Jack Nicholson, who evidently took the role without pay. Personal favorite Robert Prosky works at the station, as does Joan Cusack. I’d completely blocked these people out of my memory for some reason.

Anyway, Broadcast News does a nice job of rounding these characters out and making them complete, something I always appreciate. The characters themselves are believable. Tom, for instance, is constantly aware of the fact that he doesn’t really have the brains to be a news anchor—he knows nothing about the job really. He just looks good in a suit and can talk about one thing while someone feeds information into his ear on another thing. He feels lost and isn’t sure why everyone is giving him so much attention. Everyone has felt lost in a situation. Everyone’s been in an unrequited love (or lust) situation like Aaron. We’ve all had experiences that make these characters relatable. Jane has a few memorable quirks, like giving taxi drivers directions to where she’s going and crying when she is alone only to compose herself moments later.

But there’s still something that feels off to me about the film. The first time I saw it, I didn’t like it because I didn’t like the ending. I wanted, well, the ending that I wanted. What we actually get here is the ending that nobody really wants. It struck me wrong in the moment, although it doesn’t now. I’ve gotten smarter as a movie fan and as a knowledgeable film viewer to understand why it goes where it does.

What bothers me about the film now is that while the characters themselves are relatable, there is something about the entire situation that feels manufactured. I don’t buy the situation. I can’t really put my finger on it. The people make sense, their personalities make sense, their behavior makes sense, but the whole package just feels off to me.

Because of that, Broadcast News will likely never be one of my favorite films. I think I’ve come to a place where I can respect it easily and can even admire parts of it, particularly the moments of humor. Of all the characters, I find Aaron the most human, the one I root for the most, and the one whose actions and reactions are perhaps the most understandable. But even with him, there’s something artificial about it.

I think it’s strange that I have this reaction to the film, because it also seems very prescient. The news media, at least televised news, has become about entertainment rather than about the news or about journalistic integrity. Even more than when this film was made (25 years ago!), we live in an environment of yellow journalism, hype, and scandal. Broadcast News was released in a world that was just getting used to 24-hour news networks in a time when most of us still trusted the media, and at least a part of the film’s message was that the show was sometimes more important than the news itself. And maybe that’s the problem here. Broadcast News is dated, because there are no news organizations like the one depicted here anymore.

Why to watch Broadcast News: Good performances and some comedic moments.
Why not to watch: It very much feels its age.