I will admit that it almost feels like a cheat that I have a DVR again. I can pull things off broadcast and come at them later when I have time for them. I don’t know why it seems like a cheat, but it does. Of course, when I started this, I didn’t even have a NetFlix account, so adding a service like Turner Classic is really nothing more than the equivalent of adding a Hulu account, which didn’t feel like a cheat at all. What I’m finding is that TCM is great for some of the little-known and hard-to-find Oscar films, as well as some much more common ones. I’ve been recording a film or two every week, which means that despite having had TCM for about a month, I already have a backlog. 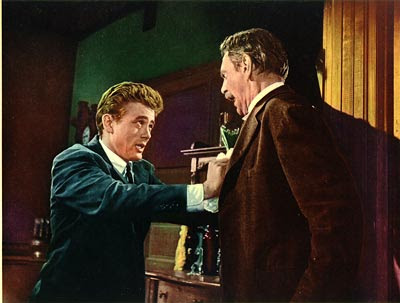 So, watching East of Eden was in part an effort to start getting through some of those films that I have waiting for me. This is a film I knew little about; beyond knowing it was based on a work of John Steinbeck (and there’s a whole family history involved in that), I came into it with almost nothing. Oh, I knew that it starred James Dean, which is what really makes it noteworthy. Beyond everything else, East of Eden features Dean’s first major film role.

It’s worth suggesting that James Dean is a good place to start if you want to start heading through the entire filmographies of actors, since he has only three credited roles. Really, you can knock him out in a weekend. I’ve now seen all three of his films (Rebel Without a Cause and Giant being the other two), and I’m just going to say it—this one is my least favorite. Rebel stretches believability in places and Giant goes on too long, but East of Eden slops on the emotional baggage and gets far too into moralizing to make it anything like one of my favorites. This isn’t to say it’s a bad film; it just leaves something to be desired.

Anyway, it’s 1917 and Dean is Cal Trask, the son of Adam Trask (Raymond Massey) and brother of Aron Trask (Richard Davalos). All their lives, Aron and Cal have been told that their mother died when they were very young. In truth, Kate (Jo Van Fleet) lives a few towns over where she is the highly successful madam of a popular house of ill repute. Cal discovers this at the beginning of the film, and it puts a strain on his already strained relationship with everyone else. See, while Aron is the good son, always supporting his father in any endeavor, Cal is the one who seems unable to gain his father’s attention. And so he rebels. Discovering that his highly moral, upright father has lied to him all these years about his mother pushes Cal just a little too far over the edge. On the sly, he tries to meet his mother and find out what made her leave.

Through all of this, Adam Trask has decided that refrigeration is the way to get California vegetables to market, and he invests in an ice house and tons of lettuce. Cal, seeking his father’s approval on the advice of Aron’s girlfriend Abra (Julie Harris), throws himself into the work. At the same time, talk of war in Europe begins to spill into the area. Aron becomes increasingly despondent over the war talk. When the lettuce venture fails, Aron falls into a deeper depression, Cal decides to get his father’s money back by investing in beans (on the assumption that if the U.S. enters the war, beans will become a hot commodity), and Abra starts to fall a bit for the sexy, sexy Cal.

Ultimately, the film is about the relationship between Cal and his father and about the seeking of approval. Cal is so convinced that Adam doesn’t really love him and truly prefers Aron to him, that he alternately does everything he can to win his father’s affection and then everything he can to distance him. For Adam, affection is not something shown—he gives only approval or disapproval to actions, and every action is black or white, of the highest good or done for base motives and with no pure reason.

So, ultimately, East of Eden is a family relationship film through the lens of rich-cum-poor-cum-rich family with a backdrop of World War I. The problem is that very few of the characters are well-developed. They all seem instead like a simple collection of traits rather than real people. Cal is constantly overeager, jumping and running everywhere, and everything that happens to him is either the height of success or crushing despair. Abra is kind of an emotional mush. Aron goes from being the perfect son to being constantly under a storm cloud. And Adam Trask is always cheerful except for when he is moralizing.

This isn’t a bad film, and may well be an accurate representation of the book upon which it is based. It’s not a great film, though, and not one noteworthy except for being the splashy film debut of James Dean. Watch it for that, knowing that ultimately he’s playing a role that he would perfect in his next two films. Oh, and it is fun to see Burl Ives as a sheriff.

Why to watch East of Eden: James Dean, pure and simple.
Why not to watch: The characters are too cookie-cutter to care much about them.