Film: Deseret
Format: Video from The Magic Flashdrive on laptop. 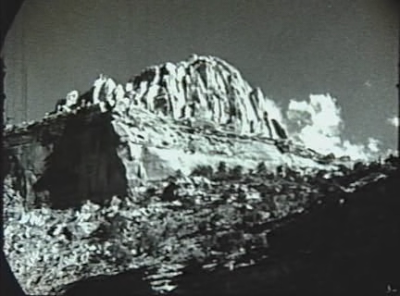 Of all the rare films that exist on The List, none is more rare than Deseret. There were a number of films that, as I started looking around, I had trouble finding, but none were more frustrating than this odd little film from James Benning. To my knowledge, this film has not only never gotten a DVD release, it’s never been put on videotape. There is a mythical copy of the film on 16-milimeter film somewhere in California, one that requires a massive deposit to rent, which doesn’t include the cost of the projector itself. I am, thus, massively grateful to Chip Lary at Tips from Chip for forwarding me this electronic copy.

Deseret is an odd film, one that is difficult to parse. On its surface, it’s a simple film—little more than a series of landscapes and a voiceover narration that seems to have little or nothing specific to do with the words being spoken. As it turns out, the words being spoken are excerpted passages from nearly 100 news stories printed in the New York Times over a span of just shy of 150 years. Each story is pieced down into a few sentences. Benning presents us with a static camera, switching shots for each sentence, and giving us a long pause on a shot between stories. Each of the stories is introduced with the individual story’s initial date of publication.

That’s really all that is here. What it turns into is, more or less, a greatly abridged history of the Mormons in Utah, from their first arrival when leaving Illinois to their various settlements and problems with the natives, to the growth of the church into something like its present state (or at least its present state in 1991). Frequently, we are given the ambient noise of a particular shot that plays under the voiceover. The shots seem to be in no particular order. There is, for instance, no progression from one season to the next in general. We see Utah in the summer juxtaposed with bare places in the desert next to snow-covered plains. When the stories suddenly reach 1900, the film suddenly switches from black-and-white into color.

As an added little quirk, the film, done obviously low-tech, shows the edges of the camera’s lens on the left side. There is evidence of a rounding of the two corners on the left side of the frame, giving the film the feel of being shot through binoculars or a telescope.

This is a difficult film to judge because of the way in which it is presented. Since the text appears to have very little to do with the images being shown, there is no obvious way to parse the images with the text. Because of this, it’s easier to separate the two and look at each part of the film on its own merit.

The text is interesting, although read in a somewhat bland monotone. Several of the stories offered are abrupt, consisting of an abridged pair of sentences while others are a little bit longer. In each case, the selected sentences give a partial, and yet somehow complete picture of the story being told.

The images are startlingly beautiful in many cases. Initially, the black-and-white photography is pretty and the color shots even more so. But this is not the standard brand of pretty that most people think of when looking at a landscape. This is a worn land, a place that appears desolate, harsh, and in some ways, completely used up. It is, for lack of a better word to describe it, filled with a sort of attractive harshness. These are beautiful shots, even if in many cases the appear to depict nothing more than a windswept field.

As a whole, then, we have a film with two interesting halves. Combined, they are not specifically something greater than the sum of the parts, but something different than that sum might originally indicate.

Fair warning, though; don’t try to watch this when you are sleepy. The droning narration and static shots will put you right off to dreamland.

Why to watch Deseret: It’s what The History Channel should be.
Why not to watch: If you’re not into it, you’ll find nothing here.