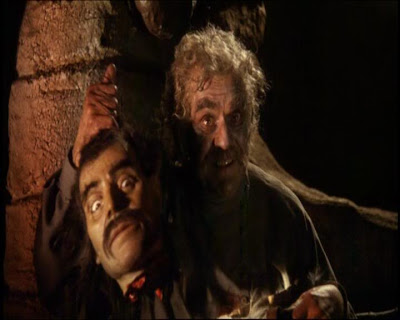 The anthology film is its own thing. While I may be wrong, it seems like most anthologies are of the horror variety. Horror lends itself to a shorter format well. All you need is a good couple of scares over the course of 20 minutes or so and everyone walks away happy. The problem with anthology films is that even good ones tend to be a little uneven at best. Take Creepshow for example; while a couple of the stories are really fun, a few are weaker and drag the film down a little. With Mario Bava’s I Tre Volti Della Paura (technically The Three Faces of Fear but distributed as Black Sabbath), we don’t have that problem. We get three pretty good little spook tales, all roughly the same length and about the same amount of fun.

It helps that there are only three stories here, so each one is given enough time to work up a good scare without overstaying its welcome. We start with a little opening monologue from Karloff, who tells us that ghosts and spirits are real. Specifically, he talks about vampires, saying that they may well be in the theater with us, since they look just like us and like to feed on those whom they loved during their lives. It’s fun and cheeky, and probably served to get a few theater goers to snuggle up closer to each other, or to eye each other a little more warily.

After this, we jump into the first story, titled The Telephone. Of the three stories, this is the one that depends the least on the supernatural. Instead, it’s much more like a mini film noir, or more accurately, a giallo. A high-priced call girl named Rosy (Michele Mercier) returns home to a series of disturbing phone calls. The person on the other end can evidently see her and says that he wants to kill her. We learn that Rosy was responsible for her pimp Frank (Milo Quesada) going to prison, but Frank has escaped. Rosy calls her former lover Mary (Lidia Alfonsi) to come stay with her. As Rosy sleeps, we learn that Mary is the one behind the calls, seeking to scare Rosy into taking her back. But if that’s true, who is the dark shape in the shadows?

We then move into the centerpiece, The Wurdalak. This is a pretty straightforward vampire story, although the critter in question, the wurdalak of the title, prefers to feed on loved ones rather than virgins or random victims. This is the story in which Karloff appears. He is Gorca, a man who kills the wurdalak in the area, but returns home, himself infected, set to prey on his family as well as Vladimire (Mark Damon), a traveler with the misfortune to stop at Gorca’s house and immediately fall for Sdenka (Susy Andersen), his daughter.

The trio of spooky tales wraps up with A Drop of Water, which is in many ways my favorite of the three. A woman named Helen Chester (Jacqueline Pierreaux) is called to prepare the body of a medium who died in the middle of a séance. As she dresses the body, she notices a large, beautiful ring on the corpse’s hand, and she pockets it for herself. From that moment on, she is plagued by the sound of dropping water and the buzzing of a fly, and may have woken the vengeful spirit of the dead woman.

Karloff comes back at the end in a bizarre little coda that puts a surreal cap on the entire proceedings. I’m not sure what to make of it, but it’s certainly interesting.

It should be noted that there is an American version of this film, and while it is similar in many ways, it is quite inferior to the international release. For one thing, the stories are in a completely different order in the American release. It starts with A Drop of Water and ends with The Wurdalak. Second, Karloff appears (if memory serves) between the segments and introduces each one. Third, and most tragically, the lesbian subplot is removed from The Telephone completely (probably a censorship issue) and makes this story much more in line with a supernatural tale without any good reason. The American version is okay, but it’s not nearly the same film.

I Tre Volti Della Paura is fun stuff. It’s a horror anthology done exactly right, with just the right amount of campy fun and just the right amount of creepy stuff to make it interesting. It probably still has the power to shock or scare some people, although horror veterans won’t find a whole lot here that makes them frightened. But that’s okay, because this is more about enjoying something like a good campfire ghost story, something with a little bit of creeps that’s a bit scary in the moment and then laughable once it’s done.

This film won’t make anyone lose much sleep, but it’s a fun way to spend 90 minutes with a horror legend. Just get the international version.

Why to watch I Tre Volti Della Paura: Because Boris Karloff is awesome.
Why not to watch: If you get the American release, you’ve not seen the film in its best light.