The IT guy where I work is a dude. When I told him that I had received this collection of rare films and wanted to put them on the system, I expected him to say no initially, forcing me to keep them on the flashdrive and burn through them as quickly as possible. However, he didn’t allowing me to install them, at least temporarily, on the computer. So while I call the source of these “The Magic Flashdrive,” they’re actually sitting in memory. While I don’t feel any specific pressure to get through them at the rate of one or more per day, I do nevertheless think it’s a good idea to get them watched sooner rather than later. Since I had to spend the night at a place with a lousy internet connection, getting through another one made perfect sense. 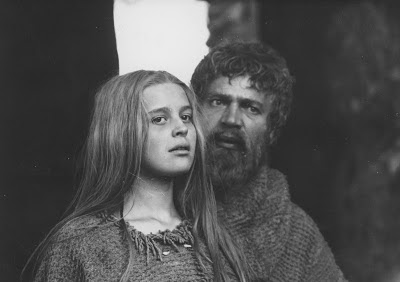 That said, I’m not sure I chose well. I’m not sure I have any real concept of what Marketa Lazarova (for some reason shortened to Marketa Lazarov in some places) really is. It’s surprisingly difficult to follow. Don’t get me wrong here—it’s not Sergei Parajanov difficult, but a lot of things happen that don’t really seem to have any specific reason or purpose or connection to anything else. I gathered pretty quickly that this is a Medieval story. Since it’s a Czech film, I gather that it takes place in and around what used to be Czechoslovakia. And beyond that? I’m doing my best.

From what I can gather, this is the story of the coming of Christianity to Czechoslovakia. On the one hand, we have the indigenous Pagan Czechs led by Kozlik (Josef Kemr). His clan is a group of raiders who survive by attacking others on the road. Among them are Mikolas (Frantisek Velecky), the one-armed Adam (Ivan Paluch) and Alexandria (Pavla Polaskova). At the beginning of the story, they kidnap a young German, whose father escapes to inform the king of the bandits. Knowing he is in trouble, Kozlik attempts to enlist his neighbor Lazar (Michal Kozuch) to assist him, but Lazar denies him. In frustration, Mikolas kidnaps Lazar’s daughter, our title character, Marketa Lazarova (Magda Vasaryova) just as she was preparing to enter a convent. As Lazar is a Christian, the king calls upon him to join in the battle against Kozlik. Frankly, that’s as good a summary as I am capable of giving.

But that is really just the basic outline of a film that runs more than 2 ½ hours, and I’m not really sure how much I can fill in on the details. I mean it—there’s a shit-ton of stuff going on here that I frankly don’t understand. People show up who I think I’m supposed to know, but I have no idea who the hell they are. Except for the major players, I can’t tell who the hell most of these people are. The Pagans and Christians look pretty much the same, and except for the context of some of the scenes, I don’t know all the time who we are with. And there’s a lot of death. There’s a knight at one point who looks like he’s going to be a major character, but then he gets shot through with an arrow and that’s all for him. I don’t even know which side he was on or who shot him or why.

Seriously, I’m completely non-plussed by this damn film. I can’t follow a thing. It doesn’t help that a great deal of it feels surreal, which only makes things more difficult to follow.

Additionally, director Franticek Vlacil made specific choices (I think) that don’t help in any way. Virtually all of the dialogue has a deep, resonant echo for no reason that I can tell. Frequently, there are multiple voices speaking at the same time. That’s probably fine for the folks who speak Czech, but I don’t and the subtitles only follow the speech of one person. What this means is that at times, I can’t tell which person is speaking the words I am reading, or even if that person is on the screen at the time.

I tried—I really tried with this one, but confusion rarely makes for a satisfying viewing experience. This is especially true when that confusing experience extends itself out to a particularly long running time.

You know what? Screw it. I give up on this one. I’ll offer that the film looks great and I love the camera work, even though it’s frequently confusing. The soundtrack is also excellent, although it comes in too loud at a number of points. But I can’t say anything else other than I shrugged my shoulders so often during this film that I now have a cramp.

Why to watch Marketa Lazarova: Great cinematography and a surprising soundtrack.
Why not to watch: What’s going on? Yeah, I don’t really know, either.