I didn’t realize just how boxing-heavy The List was until recently when I noticed at least four of them. Considering that there are very few sports films listed in general, that seems like a lot. Evidently, there is something about the fight game that makes for cinematic greatness that doesn’t exist in hockey (no films), basketball (one documentary), football (no films), or baseball (two films). It’s possible I’m wrong on these numbers, but I think those are accurate. 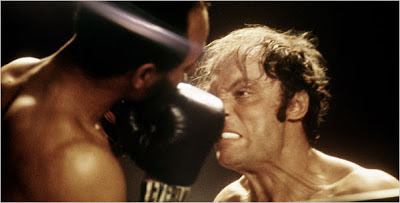 Fat City is, like most boxing films, filled with the sort of rags-to-riches possibility and rags-to-rags reality that is reality for most pugilists. There’s a definite sense that films like Rocky took something from Fat City. But it’s more than that—it’s not just about boxing, but about life on the skids, down-and-out people and up-and-comers crossing paths. But it’s more than that, too. Fat City feels like an early Warren Zevon song, like a boxing version of Carmelita. There’s a sense of pain and loss, dreams broken through bad decisions and too much drinking, shattered hopes, and resigned suffering. It’s a Tom Waits song come to life.

Ex-boxer and now full-time drinker Billy Tully (Stacy Keach) has toyed around with the idea of getting back into the ring. He runs into a young kid named Ernie (Jeff Bridges) at the gym and spars with him for a few minutes. He decides that Ernie might have the goods when it comes to boxing and suggests that he go see his old manager, Ruben (Nicholas Colosanto). Ernie does, and starts to train for amateur bouts while spending time with his girl Faye (Candy Clark). Billy appears to be all talk, and spends most of his time in bars, where he meets Earl (Curtis Cokes) and Oma (Susan Tyrrell). Billy thinks that he’s hit rock bottom, picking onions for 20 cents a bag to make ends meet and spending what little money he has on drinking.

But when Earl is thrown into jail, Billy hooks up with Oma. Faye gets pregnant and Ernie starts picking crops for extra money, too. When Billy and Ernie meet up again, Billy decides to get serious about boxing, and Ernie gets back into it, too. Billy, pushing 30, beaten up too many times in the past, and well past his physical prime, needs every break. Ernie is looking to make his break into boxing as a professional. And life happens.

There’s a lot to like with Fat City, starting with the honest performance by Stacy Keach as Billy Tully. Tully is the protagonist of his own little noir anti-paradise, caught between is desire to back on top in the boxing world and his need for drink and his lack of ability to pull himself up into the world again. His performance is matched bit for bit by Susan Tyrrell as the perpetually drunk and needy Oma. She is a screen creation like few others. When we first see her, she’s a happy drunk, playful and fun despite being degraded. As the film goes on, she becomes more and more degraded. When we next see her, Earl is in prison and she’s driving a barstool, the top of her dress undone, her hair bows barely hanging on. She’s sloppy, constantly hammered, constantly needy. It’s one of the best performances I’ve seen in a month.

Do I have a complaint? I do. The boxing isn’t very good. I mean, really not very good and obviously not very good. Everyone who gets in the ring in this film punches hard; I will not debate that. But they don’t punch with a lot a style, and in every case a halfway decent fighter would clock them a minute or two into the first round. Even casual fans of boxing will notice this right away. It’s not enough to ruin the story, but it does really affect the way the story plays out. Since a good portion of the third act is a boxing match, it’s a little difficult to take too seriously, but it’s possible to ignore the fact that (for instance) Stacy Keach can’t seem to keep either hand up to protect his face, even right away at the start of the first round.

Regardless of this, this is a film to see, and one that desperately needs a release from somebody somewhere. Fat City is not easy to find, and that’s a terrible shame for a film this good. The fact that the boxing is unprofessional is secondary to the overall tone that permeates this film. It’s almost indescribably bleak, but also perfectly real, as real as the boxing is fake. There’s a desperate pathos to the scene in which Billy cooks for Oma, an obvious desire for something that approaches normality in a situation so far from normal that it can’t even see it on the distant horizon. Fat City is gutting, but gutting in the best cinematic way possible.

Why to watch Fat City: Reality and a few gutting performances.
Why not to watch: The boxing really isn’t that great.