It's Really not that Unbelievable

Film: The Unbelievable Truth
Format: Video from The Magic Flashdrive on laptop. 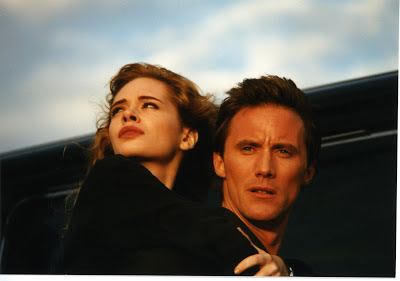 Let’s cut right to the chase on The Unbelievable Truth: I don’t know why it made The List. I honestly can’t come up with a single reason why this film made it here other than as an example of the work of Hal Hartley. Even that reason fails, though, because his much better Trust is on the list as well. In a lot of ways, Trust appears to be a remake of this film, or at least there are a lot of similarities in plot and character. Regardless, I’m pretty nonplussed as to its making it onto the Holy of Holies.

Audry Hugo (Adrienne Shelly) is a disaffected young woman who seems not to care for anything that most girls do. She’s evidently still in high school, but only goes whenever she feels like it because she’s convinced that the world is going to come to an end any day. Despite her non-attendance of school, she manages to get accepted to Harvard (and treats it like it’s no big thing). Her father, Vic(tor) Hugo (Chris Cooke) isn’t sure how to react. He wants Audry to go to college, but is incensed that she applied to Harvard, because he doesn’t want to pay for it. He’d rather she go to the local junior college (because college is college, right?). Adrienne breaks things off with her boyfriend Emmet (Gary Sauer) because he’s a yuppie-in-training.

Meanwhile, Josh Hutton (Robert John Burke) returns to town after a stay in Sing-Sing. It seems that he inadvertently killed his girlfriend, and then killed her father, and thus did time for manslaughter. Audry is naturally smitten with him because he is dark and has a past. Josh goes to work as a mechanic for Audry’s dad, which brings him into constant contact with her. Audry, having made an agreement to go to college, backs out when she suddenly finds work as a model thanks to creepy photographer Todd Whitbread (David Healy).

The biggest issue I have with this film is that it’s very amateurish. Most of the actors speak their lines like they were trained for the stage doing summer stock rather than for film. Everything is spoken too broadly and comes out forced. Burke and Shelly are the exceptions here. Everyone else (or almost everyone else—Edie Falco makes an appearance, too) comes across as an actor playing a part, not as a real person. I can handle that, but it’s so damn obvious that it gets in the way of everything going on.

I admit I was also distracted by silly things, like the fact that almost everyone in this film reminded me of someone else. Emmet/Gary Sauer looks like Bill Paxton’s mildly chubby younger brother. Mike (Mark Chandler Bailey), another mechanic currently dating the younger sister of Josh Hutton’s ill-fated girlfriend looks like the lovechild of Bruce McCulloch from “The Kids in the Hall” and TV’s Frank. Creepy photographer guy is Dave Coulier-lite. Most entertaining is that Audry’s father is a dead ringer for David Crosby after Slim-Fast.

All jokes aside, the real draw here is Adrienne Shelly, who was an underrated actress. She, of anyone, comes across as very natural in the role and I could watch her all day. The same could be said of Robert John Burke, who also fits himself into this role well. The two also have a natural chemistry and work well together. While the script puts their ages pretty far apart (15 years or so is my guess), the reality is that they were maybe six years different in age, and that really helps them work as a couple on the screen. The Unbelievable Truth is good when it’s them. It drags whenever anyone else shows up for a big of screentime.

I also like the small-town feel of what actually happened in Josh’s past. Everyone has a different story for what his actual crime(s) was/were, and everyone believes his or her own story. His past is essentially a character in its own right, and ends up as sort of a Charles Foster Kane, with everyone having a different perspective.

But here’s the real deal on this one—as mentioned above, Trust has a lot of similarities to this film and even features Adrienne Shelly as a disaffected youth chasing after an older guy. It’s a more consistent film and a more interesting one from start to finish. If you only watch one of the two, you should watch that one, because everything good in this film is as good or better there. Everything that falls short here is much better there.

It’s films like this one, films that make no real impression and have nothing noteworthy about them not covered in other entries that make me wonder precisely how this list was forged in the first place. I guess I’ll never know.

Why to watch The Unbelievable Truth: Adrienne Shelly, and for nothing else.
Why not to watch: Calling it “uneven” is an insult to uneven things.