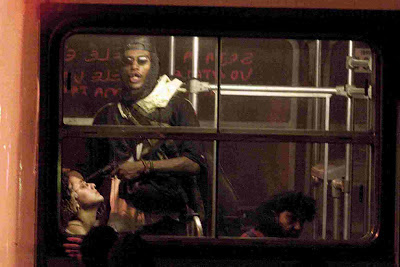 When I watched Cidade de Deus, I was taken by it. It’s a brilliant film, and one that is difficult to watch because so much of it is stark and ugly. It’s a brutal and unrelenting tale, one that seems like it can’t possibly end well, but with just enough in it for any viewer to hope that the ending will be a happy one. Today, I saw its darker cousin, Bus 174. It speaks in many ways to the same story of street kids in Rio de Janeiro, but in this case, the story is a real one.

Bus 174 tells the story of Sandro do Nascimento, a street kid from Rio who one day decided to hijack the eponymous bus of the title. The film switches between archive footage of the actual event of the hijacking, anecdotes about his childhood, and interviews of people involved in the hijacking and others. As the story plays out and more and more of Sandro’s life comes into focus, it becomes evident that this is the story of someone who has never had anything go right for him, and a day in which everything that could have gone wrong did.

It’s also difficult to find a place to hang loyalties. Sandro is hardly a sympathetic character through the bulk of the film. He’s a convict multiple times over, an escapee from juvenile detention and prison several times over, a chronic drug addict (cocaine and glue being the drugs of choice), and a thief. But anything like this story is never going to remain that simple, and it quickly becomes apparent that Sandro is as much a product of his environment as he is a disruption to it.

For instance, his mother was brutally killed, and there is significant evidence to suggest that he witnessed the crime. The juvenile detention center he spent time in was little more than a slave pen, with the children receiving no treatment or rehabilitation except in the form of regular beatings. The prison cell housed as many as four times too many people in squalid, filthy conditions.

This is to say nothing of the Candelaria Massacre. A group of men including several members of the police attacked the street kids who lived near the Candelaria Church, killing eight. Most of those involved were not convicted of the crime. Sandro was a survivor of that attack, and frequently references it during the siege around the bus. Additionally, while Sandro’s rhetoric is violent and disturbing, it’s evident as the film continues that he is not a killer at heart, telling his hostages that he doesn’t intend to kill any of them, but asking them to play along to help him.

It’s also difficult to sympathize with the authorities. When we learn about Candelaria and police involvement there, or the sanctioned beatings and inhuman conditions of the prisons, and their lack of training or their general lack of willingness to take responsibility for any actions, they come across and ineffectual bullies who are suddenly over their head. In its own way, the film builds a case not for Sandro’s innocence, but for his rage and frustration. It doesn’t seek to condone his actions or make them okay, but to make them understandable.

This is not an easy watch, because it’s so evident shortly after the film starts that there is no happy ending to be had here. Nothing anyone does is going to be the right thing, because there is no right thing. Every decision is a bad one, every choice is the wrong one. When Sandro decided to hijack a bus, his fate was sealed, as were the fates of a few other people. The bulk of the film is simply building to the point where the whole house of cards inevitably falls.

Bus 174 is compelling stuff, but not easy. It demands to be watched because of what it is and because of the story it tells, but it’s not a film that is easy to sit through. I wasn’t made angry by it, nor frustrated, but very, very sad instead. It comes with its own sense of hopelessness at the situation and the results of a terrible event. And yet, it’s exactly for this reason that it should be seen.

Why to watch Bus 174: The most compelling documentary you’ll see for a long time.
Why not to watch: The brutality is worse because it’s real.