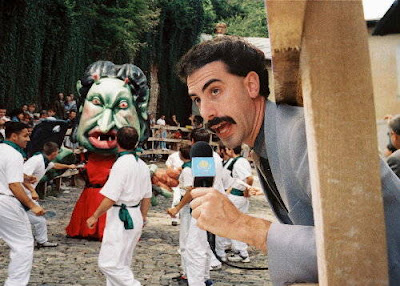 I knew going in what Borat: Cultural Learnings of America for Make Benefit Glorious Nation of Kazakhstan (hereafter referred to as Borat to save my typing fingers) was going to be. I understood the point of it, and had seen probably a third of the film in clips. But as I sat and watched and shook my head, I realized I didn’t really have a proper way to react to it.

My guess is that most people reading this have seen Borat. Whether you have or haven’t, there isn’t much need of a plot summary here. Borat Sagdiyev (Sacha Baron Cohen) is a Kazakh television personality who travels to the United States to learn American culture to benefit his country. Cohen’s creation of Borat is, of course, entirely fiction, and that’s really the point of the film. This is social parody at its highest level, the sort of thing that Andy Kaufman would have produced or directed had he still been around for it.

The Borat character is rude, misogynist, corrupt, and probably a dozen other words that aren’t coming to me. He is, of course, a complete parody, and the Kazakhstan he hails from is the sort of dystopia that only exists in comedies. The entire point of this film is not to parody Kazakhstan, but to parody American culture. In every situation, Borat is not merely a glorious fool. He is socially inept, backward to a degree not found anywhere in history. What Borat considers appropriate behavior is appropriate nowhere in the world. And so what this film documents more than anything is how people react to this racist, homophobic, misguided misanthrope in everyday situations. As might well be expected, the reactions to Borat fall somewhere between embarrassed overpoliteness and outright racism.

Like all good satirists, Cohen’s entire modus operandi is to misdirect us into taking a look at ourselves. He’s not standing in front of us and showing us the backward people of a country virtually none of us know anything about, but is instead holding up a mirror and showing us our own faults, our own hypocrisy. And he’s really, really good at this.

He’s also smart enough to know that this film simply wouldn’t fly at anything much longer than its 84-minute running time. It couldn’t, because Borat is essentially a one-joke movie. Borat walks into a situation, acts as inappropriately as he possibly can, and films the reactions of the people around him. This includes asking Republican former presidential candidate Alan Keyes to explain the gay pride parade to him, assaulting a weatherman on the air, asking a feminist group why women have smaller brains, and chasing the producer of his alleged documentary naked through a crowded hotel. And more.

I get it. I completely understand the brilliance of what Cohen is doing, and my invocation of Andy Kaufman above is not without reason, because this is exactly the sort of thing that Kaufman loved to do—he loved making the audience the joke. And while we in the film audience know this is a joke (or at least we should), he’s also smart enough to never really let us in on the joke. He never breaks character. There are moments here that are difficult to believe. It’s almost impossible to think that anyone has the cojones to pull some of these stunts off and never even crack a smile.

So while I get why this movie exists, why it’s important, why it may even be a critical film for understanding some of the many issues that the U.S. faces, I also had a very difficult time watching it. Certainly there were many places in this film where I laughed, and laughed hard. But there were also many places I cringed, wondering just how long a particular scene would take to end. My overriding emotional reaction to this was embarrassment for everyone who wasn’t in on the joke of one of the most elaborate pieces of performance art ever conceived.

That, and for the life of me I can’t figure out how people didn’t realize it was all a joke. Kaufman would’ve gotten it. In fact, Kaufman would have been offended if he hadn’t been asked to take part in it.

Why to watch Borat: Cultural Learnings of America for Make Benefit Glorious Nation of Kazakhstan: You can’t believe he actually did this.
Why not to watch: Embarrassment for everyone else involved.