Film: The Reckless Moment
Format: Video from The Magic Flashdrive on laptop. 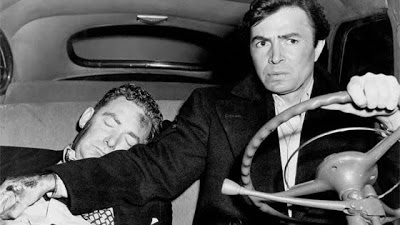 I went in to The Reckless Moment completely cold, so I was surprised when the great James Mason turned up about 20 minutes in. I like James Mason and tend to like films that he’s in. Even when I don’t like the film, I still like Mason. He makes a good villain; there’s something about that peculiar speech pattern of his that seems menacing when he wants it to be, even when (as here) he uses it to affect an accent. As it turns out, I’m glad that he was in this picture, because there’s not much else to watch.

So here’s the story: Lucia (pronounced “LOU-sha”) Harper (Joan Bennett) discovers that her precious and precocious daughter Beatrice (Geraldine Brooks) has been carrying on with a much older and shady individual named Ted Darby (Shepperd Strudwick). Lucia heads out to tell Darby to stay away from her daughter. Darby says he will, but only if she pays him off. Offended, Lucia returns home and confronts Bea, who tells her that she intends to continue seeing Darby.

Darby shows up that night, and Bea heads out to the family boathouse to see him. He freely admits that he did make the offer, but before he can explain that he wouldn’t have stopped seeing her, Bea runs off. Darby tries to chase her, slips, and falls to his death by landing on a boat anchor on the ground below. This makes what was truly an accident look like murder, and Lucia compounds the problem when she finds Darby’s body by driving him away from the scene of the crime.

She thinks that’s it, only to meet Donnelly (Mason). It seems that Bea had been writing to Darby, confessing her great love for him, and Donnelly has come into possession of the letters. With Darby now dead, Donnelly and his partner Nagel (Roy Roberts) can easily make Darby’s death look like murder, with either Bea or Lucia herself as the most likely suspects. All he wants in exchange for the incriminating letters is $5,000. Sadly for Lucia, her husband is out of town on business and won’t be home for months, which means she can’t get her hands on the money with any sort of speed. And then it becomes evident that Donnelly is a little sweet on her, and starts to act on her behalf, attempting to put things right.

The basic premise of The Reckless Moment is great, running almost like a Hitchcock film. The idea of someone being wrongfully accused of something that looks perfectly like a murder would have been right up his alley. It’s just about everything else that doesn’t really work here, which makes this film ultimately kind of dull. I have nothing invested in any of these characters by the end. I couldn’t really care less what happens to Lucia or to Bea, who is non-existent enough to almost not matter to the film.

More to the point, it’s evident as we start the third act that Donnelly has started to fall for Lucia, and there’s not a single reason for this to happen. Near the end of the film, Donnelly offers a speech essentially about being tired of being the bad guy and wanting to do at least one good thing before he dies, which is what led him to try to help Lucia. But his motives are obviously more than just altruism. And I don’t get it. Oh, I don’t mean that Joan Bennett is unattractive or anything, but she doesn’t exhibit much personality other than being concerned for the well-being of her daughter. As portrayed here, Lucia is almost completely two-dimensional, which makes for an uninteresting series of actions.

Significantly, it’s this plot twist at the start of the third act that drives the rest of the film. Without Donnelly falling at least a little for Lucia, there’s no way to get to the inevitable resolution of all of the problems. Since that ultimately falls flat, so too does the entire end of the film, and thus the film itself.

I should also mention Lucia’s son David (David Bair), who has one of the most annoying voices I’ve come across in film. It’s like nails on a chalkboard every time he speaks. As far as I’m concerned, the film lives or dies on James Mason. He’s great, as always. Sadly, he’s not good enough or make this one into something better.

Why to watch The Reckless Moment: Because James Mason makes a great villain.
Why not to watch: You won’t find a lot to care about here.