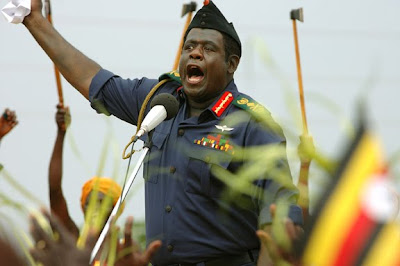 When I first saw The Last King of Scotland, I was very much interested in it. While most of my interest stemmed from seeing Forest Whitaker in a role he won an Oscar for, a little bit of it was for James McAvoy, who had a brief run as the flavor of the month between his role in the first Narnia film, this, Atonement, and Wanted. The film did not disappoint; this is an impressive film, but a very disturbing one. I have distinct memories of parts of this film, and had put this on my short list of films I’m happy to have seen and never want to see again. Thus it’s taken me this long to return to it. I wasn’t anticipating this rewatch, but I couldn’t put it off any longer. (Okay, I could, but I’ve waited long enough.)

The Last King of Scotland is a semi-fictionalized account of the beginnings of the rule of General Idi Amin (Forest Whitaker) in Uganda, told through the eyes of Nicholas Garrigan (James McAvoy), his personal doctor. The film starts with Garrigan’s graduation from medical school and his immediate dissatisfaction with working in his father’s practice. He spins a globe, vowing to go practice wherever his finger lands when he spins it. He comes up with the prosaic Canada first, so he tries again and lands on Uganda.

In Uganda, Amin has just taken power, and Garrigan goes to watch one of his speeches with fellow clinic doctor Sarah Merrit (Gillian Anderson, looking nothing like her X Files persona). On the way back, the discover that Amin has had a minor accident, and Nicholas goes to treat his injured hand. A wounded cow, evidently struck by Amin’s car, moans on the ground, and disturbed by the noise, Nicholas grabs a pistol and shoots it. As it turns out, the gun he grabbed was Amin’s and things are very tense until Nicholas reveals that he is a Scot. Amin, it turns out, is a huge fan of the Scots, and within days, Nicholas has become his personal physician.

One feature of Nicholas’s new position is that he frequently runs into Stone (Simon McBurney), a man who works with for the British government. At first, Nicholas’s life is all about parties and helping Amin with any medical problems he might have. He also manages to save Amin’s son by Kay (Kerry Washington), his third wife, when the boy has an epileptic fit. But as time goes on, he starts to realize that things are not what he pretends to himself that they are. When he sees another of Amin’s advisors (Stephen Rwangyezi) speaking with men he doesn’t recognize, he tells Amin, and suddenly the man has disappeared.

More seriously, and much more dangerously, he begins a relationship with Kay. This relationship becomes very complicated when Kay becomes pregnant. The child can only be Garrigan’s because she has fallen into disfavor with Amin since her son is epileptic. This is a death sentence, something that Garrigan is starting to see with the mass killings and mass disappearances happening across the country. However, since Amin has had his passport taken, he is stuck in Uganda. Stone refuses to help unless he uses his position to assassinate Amin.

I won’t go into the last half hour or so of this film. Suffice to say that it is grueling.

This is a difficult film to judge in a lot of respects. On the one hand, this is a staggering film, one that is incredibly compelling. The problem is that it’s compelling like a train wreck. It’s terrible and brutal, and yet demands to be seen. This is an ugly film, but it is ugly for a reason. It’s fantastically made, a film that is truly spectacular. It’s one of the situations for me that reminds me that art is not always beautiful. There is art, like The Last King of Scotland that exists to expose something terrible, to show us a picture of the world that we don’t want to look at but must see anyway. In many ways, this is the highest function of art—to show us reality through the lens of fiction, to wake us up that the happy ending frequently doesn’t happen for the people we want, or for us.

For me, the first and best reason to watch this film is for Forest Whitaker, who turns in one of the truly great performances in the history of film. He went deep into himself and deep into Amin to get this character. It’s reported that he stayed in character even when not filming. I think he had to. This was a dark place, and I’m not sure that anyone could have gone back into it once they came out. I put this performance on a par with anything I’ve seen. It’s that believable and that terrifying.

So make no mistake: this is not something to put on for a night you’re looking for a little light entertainment. This is a grueling, brutal film that will leave you emotionally shaken and physically shaking. It is an amazing piece of work and not one to be taken lightly, but it’s worth seeing.

Why to watch The Last King of Scotland: Forest Whitaker earned every ounce of that statue.
Why not to watch: This is not a happy film.