The Sound of War 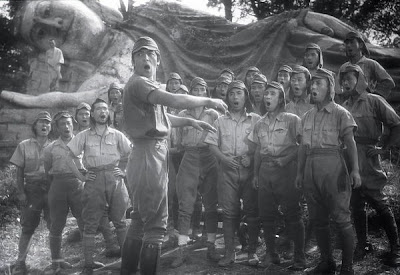 I’ve heard of Biruma no Tategoto (The Burmese Harp) before, having seen it on a number of lists of great films. I can’t say that it was a film that I particularly looked forward to watching, but also knew that it had to come someday. Well, today was the day. Once again, I wonder at my own hesitation. This film is a true work of power and beauty. Dare I call it a masterpiece? It’s been a good year (I think) since I’ve used that word to describe a film, but it’s a word that seems created for this film. I can think of no other word to fully encompass just how good Biruma no Tategoto is.

At the end of World War II, a group of Japanese soldiers fights in Burma. These men operate under the direction of Captin Inoye (Rentaro Mikuni), who has a background in music. He teaches the men to sing complex choral compositions as a way to boost morale. One of the soldiers, a man named Mizushima (Shoji Yasui), learns to play a variation of a native harp. With this, he accompanies the men’s singing. Additionally, he uses the harp as a way to signal the troops when he scouts. Each song he plays has a different meaning—stay back, it’s safe to advance, etc.

The squad encounters a group of British troops and learns that the war is over; Japan has surrendered. At a camp, they learn that a group of Japanese soldiers is still holding out despite the surrender, and Mizushima is sent to get them to surrender peacefully. However, the indomitable fighting spirit of these men will not allow them to give in, and eventually they are bombed into submission. Actually, they’re bombed flat, and only the hapless Mizushima survives. He disguises himself as a monk to give him freedom to move around and sets off, unaware of the fate of the rest of the men in his squad.

The men have survived, and while prisoners, are in good shape. They hunt for Mizushima and meet a monk who looks like him. Undaunted by reports that Mizushima is dead, they purchase a parrot and teach it to say, “Mizushima, let’s go back to Japan together.” At the same time, Mizushima has encountered hundreds of bodies of slain Japanese soldiers and begins to bury them out of a sense of duty.

I will not go further into the plot than this, because Biruma no Tategoto deserves to be seen relatively cold. This is not a movie to see spoiled, because the strength of this film comes from its emotional impact on the viewer, and there is a real emotional impact here. This is aided throughout by one of the most engaging and beautiful soundtracks I have ever heard. Throughout, the music is almost a character in an of itself, from the choral songs to the delicate harp music to the more traditional film score, the music is almost always present, and almost always the right choice for each spot.

But there’s quite a bit more beyond the music. This is a film of serene beauty, calm, and purpose in the middle of chaos and war. Even when the war is over, there is chaos, and the music seems to be there in place to fight against it. Also fighting against this is the slow camerawork, often featuring some long times without the camera moving. Biruma no Tategoto, despite being labeled as a war film, is much more a film of peace. It is a reaction, very possibly Ichikawa’s, to a world that has so splintered at the time of the film, that there is no simple solution to anything. Ichikawa seems to be saying that war may well be inevitable, but perhaps peace is, too.

Biruma no Tategoto is a remarkable film. There are few films that I have seen that so completely and thoroughly destroy the notion of war while simultaneously being a war film. There is a dream-like quality to it, something nearly impossible to actually express. There is a transcendent quality to this film that only a few rare films can share.

In short, this is a magnificent film and it will still be talked about 100 years from now, and with very good reason. I'll admit that the late hour and the beautiful music caused me to drift off now and again, but despite this. I continued to watch as I drifted in and out of consciousness (evidenced by some earlier typos). This is a must-see, a film of supreme introspection and philosophical weight.

Why to watch Biruma no Tategoto: A film of tremendous power and beauty.
Why not to watch: It’s not much of a war film despite being a war film.