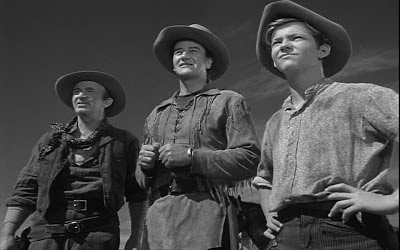 I don’t love Westerns. I don’t dislike them specifically, but I rarely want to watch one. I suppose that this is something I have in common with most modern film viewers. The Western genre seems like one that hangs around at the edges of consciousness, with a couple coming out every year. Every now and then, one will pop up into the mainstream only to quickly fall away, taking the rest of the genre with it. While Westerns will never disappear forever, I think it’s safe to say that their heyday is gone and gone for good. I need to will myself to watch a lot of Westerns unless they are ones I’ve seen before and know I like. Red River is one I had to force myself to watch, and sometimes had to remind myself to keep watching.

Oh, this isn’t a bad film. It’s just a very standard horse-and-saddle picture with a few very weird conclusions drawn at the end. It’s a morally vague picture that never intended to be morally vague, I think. At least now, 65 years after it was filmed, the moral lessons of this film are decidedly sketchy. The other thing is that this is a story I’ve seen played out before. It’s really little more than Mutiny on the Bounty with horses and cows and a different ending. But mostly, the reason my mind wandered at times and I had to jump back to pieces I’d zoned out over is that this is a film that telegraphs where it’s going minutes before it gets there. There’s no Western or film cliché that this film starts that it doesn’t finish right on cue.

Tom Dunson (John Wayne) is headed west with his friend Nadine Groot (Walter Brennan, and yes, his name is Nadine) with a wagon train. As they pass by Texas, Dunson and Groot decide it’s time to head off on their own. For Dunson, this means parting with Fen (Coleen Gray) because he decides that the raw land of Texas is no place for a woman. He comes to regret that decision when he and Groot see smoke on the horizon. The wagon train is attacked and everyone slaughtered. The natives then attack the pair, who fight them off. But, Dunson and Groot lose their two cows and are left with only a bull. Fortune smiles on them briefly as the sole survivor of the attack wanders in with a single cow. This is Matt Garth (Mickey Kuhn initially, then Montgomery Clift for the bulk of the film). He throws in with Dunson, and they claim a patch of territory for raising cattle.

Jump forward 14 years. Matt is grown, the South has lost the Civil War, and Texas is cash poor and can’t afford beef. Dunson has nothing but his herd, so he decides to embark on a massive cattle drive all the way up to Missouri to sell off his cows. On the way, the men encounter a series of problems—stampedes, bad food, desertions—and the more things go on, the more Dunson becomes hard-nosed and willing to do anything to move those cows. He becomes such a tyrant in fact, threatening to hang two men who desert, that Matt steps in and takes over, effectively wresting control of the drive from Dunson, which causes Dunson to follow along, looking for the opportunity to kill his adopted son.

That’s really it in a nutshell, but there’s quite a bit going on here that, as I said at the start, is morally sketchy. Dunson isn’t merely a hard man, he’s borderline insane with power and control. The stampede is caused by the actions of one of the men on the drive, and as punishment, Dunson plans to tie him to a wagon wheel and whip him, then prepares to shoot him down. The penalty for this? Well, everyone is a little put out by it. This says nothing of the ultimate fate of gunslinger Cherry Valance (John Ireland), which seems so cold and callous that even in the Old West such things wouldn’t happen. It’s best placed under a spoiler tag, though.

At the end, in the final confrontation between Dunson and Matt, Cherry Valance, who has been a part of the cattle drive from the start, simply asks Dunson to stop and think for a second. And Dunson shoots him. We aren’t given any indication of whether or not Valance is dead, although he does collapse on the spot, but once that quick little duel is over, Dunson walks on to confront Matt over the cattle drive. And nothing happens. This isn’t even frontier justice, because it happens within the limits of a city—they’re all standing in Abilene when this goes down, but evidently, it’s fine to shoot people for being reasonable and have as your ultimate penalty a heartfelt reconciliation with someone else. It just comes off as cold and ugly, especially since we don’t spend another frame of celluloid on the poor guy who just got nailed.

Anyway, there are clichés in abundance here. The moment one of the guys on the drive starts talking about what he’s going to do with his pay and how he wants to buy his wife a nice pair of red shoes, you know he’s doomed. And before you can say “doodly-doodly-doop,” the cattle stampede and he’s killed. And you know there’d be a stampede, because there always is. You know there’s going to be confrontations with the Comanche, because there always are. You know that the one native character will talk without using articles or the correct pronouns because that’s the way they talk in the movies.

I get it, though. I get that this is in many ways a different sort of Western with an imperfect major character, and that’s pretty notable. And if you haven’t seen a ton of Westerns, this one is pretty good. Walter Brennan is great, as always, and I even liked Montgomery Clift, which is noteworthy, since I usually think of him as a non-entity. But overall, there’s nothing here that you haven’t seen a dozen times before.

Why to watch Red River: John Wayne at his John Wayne-iest.
Why not to watch: It’s just Mutiny on the Bounty with cows.