...and All is Well in Our World

Film: Safe
Format: Video from The Magic Flashdrive on laptop.

Julianne Moore loves her vagina. I say this based solely on the number of times I have seen her reveal it in films. The difference between the Mona Lisa and Moore’s mons pubis is that not everyone has seen the Mona Lisa. I half believe that rather than shaking hands with a new person, Moore just pulls up her skirt and offers the goods with a murmured, “There’s a little Moore down here, too.” 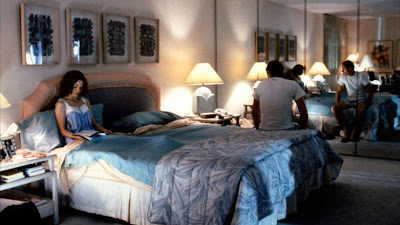 That said, it’s something of a surprise that Safe, which features women’s locker rooms, aerobics classes, doctors’ offices, and hospital gowns fails to have Ms. Moore going out in a blaze of glory by displaying her personal blaze of glory. Seriously, if any film past Boogie Nights contained the potential for frontal nudity, it was this one. Safe, as it turns out, is the closest thing I’ve seen to a horror movie that contains no specific horror. A nudge or two in one direction would put this firmly into the camp of terror-inducing thriller.

Carol White (Moore) is the stereotypical wealthy housewife of the mid-1980s. She spends her time lunching with friends, going to aerobics classes, and telling her help what to do. A serious problem for her is discovering that the new couch she ordered has arrived in the wrong color. She doesn’t work, and despite calling herself a homemaker, does very little in the sense of creating a home. She is indolent, bored, and dull. There’s also a real sense of her being not unintelligent, but uninformed and apathetic as long has her world is unaffected. Her husband Greg (that-guy Xander Berkeley) and stepson (Chauncey Leopardi) are both the center of her world and somehow detached from her. Carol lives in her own world of suburban California malaise.

And then she starts getting sick. At first, it’s little things like a coughing fit when stuck behind an exhaust-pumping truck in traffic. Then it becomes unexplainable, like a sudden nosebleed while getting a perm or reactions to someone’s cologne or hairspray. Psychiatry reveals nothing, and batteries of tests only demonstrate a sensitivity to milk, which she drinks by the gallon through the course of the film. Eventually, she collapses while at the dry cleaner when the place is being fumigated. With no formal diagnosis from her doctors, Carol decides that she has Multiple Chemical Sensitivity.

The reactions around her are about what would be expected. Her friends demonstrate concern for her, but also talk about her behind her back. There’s a sense that they see her as a drama queen. Her husband wants to be concerned for her health, but also doesn’t understand what she is going through or really have a great deal of sympathy. Eventually, Carol discovers Wrenwood, a sort of health commune in the middle of the desert, away from all of the toxic chemicals and fumes she encounters in her regular world. Wrenwood is a sidestep away from being a religious cult. And as she moves into this new world, separate from her family, her world changes into obsession of her own health and well-being.

There’s a lot going on here, and director Todd Haynes is smart enough to let it happen in front of us without making much comment on it or steering us specifically in one direction with the material presented. He does give us the perfect environment to channel our thoughts, though, but leaves the interpretation completely open. First, while Safe is almost purely a drama, it is presented with the soundtrack of a horror movie. The soundtrack is frequently low, extended notes that seem to gather tension in them. In another film, such ambient tones would suggest something about to pop out of the trees at any moment. Second, Haynes is devilish with his use of the camera. We frequently see scenes at distance, with the human figures small. An early scene shows Carol at the door of a friend’s house, but the scene is really just the house—Carol is almost invisible. In a real sense, the environment itself is a character, and frequently Haynes wants as much of that character on the screen, even if (or more accurately, especially if) it reduces Carol’s size in the frame to something almost insignificant. He also moves the camera only slightly when he moves it at all. These long takes, slow pans, distant shots, and low droning tones all combine to make Safe’s title ironic. There’s no sense of safety here, no place of security.

So the real question is what’s going on with Carol. Haynes is smart enough to offer up several possibilities and smarter to leave them all open. It’s entirely possible that everything Carol is experiencing is real and that her MCS is legitimate. It’s possible, but I think it’s also the least likely possibility. It’s also possible that Carol is in the beginning stages of something like AIDS. Peter Dunning (Peter Friedman), who runs Wrenwood is an AIDS patient, though, so this might just be a red herring.

What seems to work for me as a reason for everything is that all of this is in Carol’s head. It doesn’t explain the nosebleed, but it could account for pretty much everything else she goes through, even the collapse at the dry cleaners. But why? Because it makes her special. Carol’s life is a bland world of lunches and aerobics classes, and a sudden, unexplainable, Munchausen-like, unspecified set of illnesses makes her special. It means everyone has to pay attention to her and feel pity for her and that things need to be done for her. It gives her meaning and purpose.

It’s purely evident why this film grossed far less than $1 million—it is unsettling in an unsettling way. This is not the fun rollercoaster of a horror film with a wisecracking slasher and nubile nudity. It is horrific in a different way, the sort of experience that makes the audience question every sneeze and cough, that sets the skin to itching. It’s also evident why it was chosen to be on The List in the first place. Here’s a hint; it’s for the same reasons.

As a final note, I loved seeing Jessica Harper pop up here as another patient at Wrenwood. She still looks a little like Karen Allen.

Why to watch Safe: A horror movie without the horror part.
Why not to watch: You’ll itch for a few days.