Whom Do You Trust? 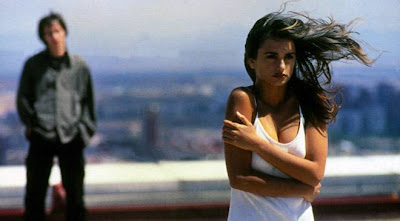 It’s really difficult for a film to surprise me these days. I’ve seen so many films in the last three years that I feel like I’ve seen all of the tricks. So when one really surprises me, I’m prone to like it. Abre los Ojos (Open Your Eyes) surprised me. It went somewhere I didn’t think it was going, and I enjoyed that aspect of the film quite a bit. However, it makes the summary of the film quite difficult, because this is not a film to have spoiled. In fact, this is true to the point that I’m not going to put anything under a spoiler tag. I’ll do my best.

Cesar (Eduardo Noriega) is wealthy, thanks to inherited money, and attractive, making him quite the hit with the ladies. On the night of his birthday, he meets Sofia (Penelope Cruz), the current girlfriend of his best friend Pelayo (Fele Martinez). Cesar is also being pursued by an unstable one-night stand named Nuria (Najwa Nimri). He and Sofia hit it off, but there’s some fear of his being disloyal to his friend, a fear that he quickly overcomes. He spends a night with Sofia, although they do not sleep together. The next morning, he goes outside and sees Nuria, who offers him a ride. Shortly thereafter, Nuria purposefully crashes her car, killing herself and disfiguring Cesar terribly.

This is all told in flashback, most of it coming out in therapy sessions between Cesar, who is hiding behind a mask that dips firmly into the uncanny valley, and Antonia (Chete Lera), his psychiatrist. We learn that Cesar is in prison for a murder, although it’s not clear who was murdered or why. And then things start to get weird, like Jacob’s Ladder weird. Sofia becomes Nuria but claims to still be Sofia. And evidently, Cesar has been shouting about someone named Eli (for pronunciation, think “Ellie”) in his sleep. And that’s when the real mindscrew begins.

I’m going to leave it there, because I don’t want to give much of anything away. It all ends up making perfect sense in the end, and it’s the sort of ending that I feel like I could have seen coming if I’d been a little smarter. I should also mention at this point that if you’ve seen Vanilla Sky, you already know where this is going, since that film is a remake of this one. Regardless, I’m leaving off the summary here so as to leave the actual impact of this film open for anyone who hasn’t (like me up until today) seen either film.

So let’s talk about what I can talk about—primarily our principle cast. I’m a fan of Eduardo Noriega in the films I’ve seen him in. He plays crazy really well, doing it primarily here and then again in The Devil’s Backbone, which happens to be a personal favorite of mine. It’s a good performance here, much of which comes from behind a rubber mask, meaning that a great deal of his work as an actor needs to come from body language and voice. He’s always believable in the role, even when we can’t be sure he’s an entirely trustworthy narrator.

For me, though, the real joy is spending time watching Penelope Cruz, who I adore. She’s not only remarkably easy on the eyes, she has the chops to really sell a role. I’ve liked her in everything I’ve seen her in, and very much so here. It’s worth noting that Cruz reprised this same role in the remake. Since I haven’t seen that, I can’t comment, but in my opinion, she’s always worth watching. She plays this with just the right amount of fear and tenderness, ashamed of her treatment toward Cesar after his accident and shameless of her treatment of him after multiple surgeries.

It’s also worth noting that Chete Lera, an actor I’d never seen before to my knowledge, is given a sort of thankless role here (literally—those who’ve seen the film know exactly what I’m talking about) and nails it. In many ways, he becomes the most sympathetic character in the entire film, or at least the one for whom I feel the sorriest.

Overall, I liked this one quite a bit. It’s a smart film, one that drops a number of clues to its ultimate purpose but doesn’t really give away the farm until the very end. I appreciate that it does, in fact, give up the full realization at the end of the film. While I like a bit of mystery now and then and am fine with an open-ended finish, this is one where knowing exactly what happened really works for me.

So why see it? Because it’s a mindscrew. Because it’s smart. Because it doesn’t underestimate its audience. That third reason is rare enough to make this one noteworthy.

Why to watch Abre los Ojos: One of the greatest mindscrews in recent memory.
Why not to watch: The culmination may well piss you off.