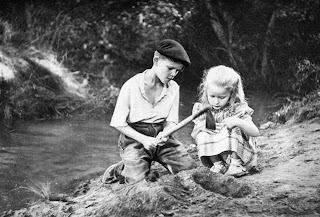 If you get it into your head that war is a noble pursuit, I can list off a number of films that will do their best to convince you otherwise. Up to now, the film at the front of that list would have been Idi i Smotri, but now it finds itself sanding side-by-side with Rene Clement’s Jeux Interdits (Forbidden Games). Both of these films take place during World War II. More central, both films deal with the idea of lost innocence and the requirement of young children to grow up in the face of poverty, death, and the atrocities of combat. How does a child remain a child when death is at every turn?

During the invasion of France, young Paulette is on the run with her parents. Like everyone in the line of refugees, Paulette (Brigitte Fossey) and her folks leave their car and run for cover when German planes strafe them. During one such strafing run, both of Paulette’s parents and her dog are gunned down, leaving her immediately orphaned and alone. She is temporarily picked up by another fleeing family, but when the woman throws the corpse of the dog out of the cart and into a river, Paulette escapes to retrieve it.

It is here that she meets Michel Dolle (Georges Poujouly), a young peasant boy chasing after a missing cow. Paulette’s arrival coincides with Michel’s brother being run over by a runaway horse cart. Paulette is worried about the body of her dog being cold and lonely, so she and Michel bury the dog in a ruined barn, and add the body of a dead mole to keep the dog company. Eventually, the brother dies of his wounds, and Michel steals the crosses from the hearse to decorate the graves.

The theft of the crosses is blamed on the neighbor, with whom the Dolles have a running feud. The son of the other family has deserted from the military, since there is no hope on the front. And, just to spice things up, there’s a Romeo and Juliet subplot, as this deserting son and the Dolle’s oldest daughter are seeing each other (in the Biblical sense) on the sly and would like to get married over the wishes of both of their fathers.

But this is a subplot. The main thrust of the story is the relationship between Michel and Paulette, which quickly becomes dependent. They are constantly in each other’s company and constantly deciding on what to add to their small animal graveyard. This burying and tending of dead animals becomes the way that the two of them start to work through their approach to death and dying and the carnage of the war that they see around them. Eventually, Michel agrees to steal crosses from the cemetery (including that of his brother) to decorate the animal graves to placate Paulette’s desires.

Naturally, this is not a particularly lighthearted film, or one that is easy to watch. While the film is beautifully made, it is little Brigitte Fossey who steals this film from everyone else. She offers a completely natural performance, and one that is completely affecting. She is completely pitiable and pathetic, and would be even if she didn’t say a word. And it’s a demanding role. She must deal with the death around her and still remain a child, pleased by the idea of crosses on the grave of her dead pet.

As I said, this is not an easy film to watch, but the relationship between Michel and Paulette is something truly special. And because of this, the ending is five of the most gutwrenching minutes I’ve spent in front of a film in a very long time. Pain is a terrible thing to see, but much more so the pain of children.

It’s a beautiful film, the sort of thing that everyone should see. It is a moving and poignant portrayal of the emotional damage caused by war of all types and the wreckage it leaves behind. It’s also so emotionally draining that I don’t know if it’s a film I can watch again. I compared Jeux Interdits to Idi i Smotri, and it’s affect on me was similar. It is sobering and heartrending, and beautiful because of and despite this.

Films like Jeux Interdits are rare things. This is both good and bad. It’s bad because it reminds me of the emotional effect a truly masterful piece of craft and art can have. It’s good, because I’m not sure how many films like this I can take in a lifetime.

Why to watch Jeux Interdits: Paulette and Michel.
Why not to watch: The ending is gut ripping.