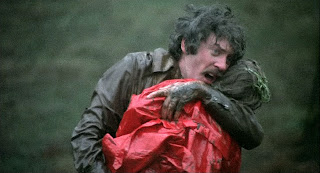 It will soon be time to retire the portable DVD player permanently. It still plays movies well enough, but the dead remote (and it’s not the battery) makes it far less functional than it could or should be. That, and it no longer holds much of a charge, something I’ve confirmed on several trials now. It’s kind of sad, really. I like the little player. I’m also just enough of a cheapskate to not really want to suffer the expense of buying another one. So I muddle through, using it at times in the vain hope that it will have somehow magically improved, and it never does. So, sad as it is, Don’t Look Now is likely to be the end of the line for its usefulness.

Then again, it seems additionally tragic to have its last film be something as dark as Don’t Look Now. In its own way, this is as dark a film as I have seen in a long time. I won’t pull a lot of punches here, because I do want to be clear with what exactly why this film is likely to elicit strong reactions in many people who see it. Five minutes in, and I was honestly ready to turn it off. Why? Because in the first film minutes of the film, the daughter of our principle characters, Laura Baxter (Julie Christie) and John Baxter (Donald Sutherland) drowns in a pond. I’ve seen kids die in films before, of course, but there was something very different about this. My reaction to this was extremely visceral. I don’t like seeing kids die in films, but here, it seemed like such a real thing that I didn’t want to keep watching.

However, I did. We flash forward in time to see the Baxters in Venice where John is working on restoring an old church. And this is where things start to get into the more surreal and paranormal areas of this film. While in a restaurant, Laura bumps into a pair of older sisters (Hilary Mason and Clelia Matania), one of whom is blind and proclaims herself a psychic. She offers extremely specific information about Laura’s dead child (like her shiny red raincoat), a revelation that eventually causes Laura to faint and be hospitalized.

Further encounters with the sisters lead Laura to believe that she and especially John are in some sort of danger. When their son is injured in an accident at boarding school, Laura leaves Venice for England, but John sees her the next day with the two sisters. Additionally, there is a series of murders taking place around Venice. John catches small glimpses of a short figure in a red raincoat exactly like the one worn by his daughter. And then there are accidents on the church restoration project.

In essence, Don’t Look Now is a pair of narratives—the family dealing with death and the serial killer subplot—made far more complicated by editing. A great deal of what we see appears to be flashback but is actually flash-forward, glimpses of what is to come and the real danger that is lurking around Venice. And, I’ll be blunt here, it’s the complexity that holds the film together. Without the forced mystery of what is going on, there wouldn’t be much of a reason to pay that much attention to this film.

Coincidentally, I’m currently reading through a series of gothic short stories that were mentioned specifically in an essay by H.P. Lovecraft about the use of horror and dread in fiction. There’s a great deal of that tradition in this film. The horror here is aimed higher than we might typically expect, and that means either that it works completely or that it fails completely. Some audience members will see this film and decide that the horror going on here is of such a deep existential quality that it qualifies as truly terrifying. Others, lacking anything more obvious than vague dread, will find that it falls flat. This is also in keeping with the gothic tale and with much of Lovecraft’s work in which the true dread is only glimpsed in passing, never seen fully face-on. We’re forced to fill in many of the gaps ourselves, and director Nicolas Roeg trusts us to do just that for him.

I’m also put in mind of a film like The Sixth Sense in which a second viewing offers a great deal more information than the initial viewing. In this case, it’s not about the depth of the story or missed symbolism, but in the use of flashback and flash-forward to generate a more coherent picture of the overall story.

I get why this film is so important to the genre despite the fact that even though I saw the horror that was intended, it didn’t work that well on me. Perhaps it’s because it was too telegraphed or that I managed to figure the mood before the mood captured me. It’s worth a view, and probably a second view, but not today.

Why to watch Don’t Look Now: There’s a reason it’s considered a classic of the horror/thriller genre
Why not to watch: If you react poorly to dead children, you’ll react poorly here almost immediately.