Film: In the Year of the Pig
Format: DVD from NetFlix on various players. 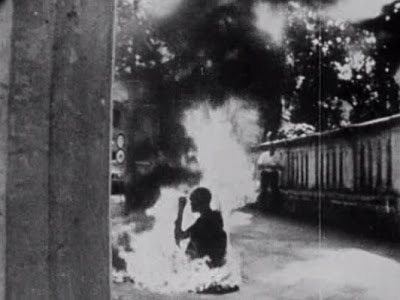 It’s a sad thing to say, but I think the life expectancy of the kick-ass portable DVD player that has been my companion for slightly more than two years is on its last legs. It doesn’t hold a charge for more than about 45 minutes anymore, and now the remote no longer works, even with a fresh battery. It’s sad, but I got a great deal of use out of the little machine, and maybe it’s time to hang it up. Ending it with a film like In the Year of the Pig somehow seems appropriate.

In the Year of the Pig is a war documentary, which puts it into a very specific genre. What it is not by any stretch of the imagination is a a film that depicts war as anything other than something terrible. More than that, Emile de Antonio’s film shows that the conflict in Vietnam was caused as much by American pride and expansionist policies as it was by Ho Chi Minh, the influence of China, and the French presence in Indochina.

The film has no real plot other than the war itself, and it starts further back than many people will deem necessary. However, the Vietnamese war started long before the U.S. became involved in that particular quagmire. The film covers a great deal in is running time, beginning with the French failure at Dien Bien Phu going through the various American presidential administrations and the slow build of American involvement in the war. We started with supplies of materiel and advisors, and then the ability for Americans to retaliate to attacks, and then a full-scale American involvement.

To make his case about the war (and no, I’m not going to give any credence to the polite fiction of it being a police action), de Antonio uses a variety of footage of major newsmakers of the day, interviews, and footage from Vietnam itself. Included in this is the disturbing footage shown above, of a Buddhist monk immolating himself in protest. This, along with the political realities of the area, plus colonialism, plus the involvement of China, and on and on, made Vietnam the morass it became. Actually in point of fact, it was still “becoming” when this film was made, as America was still involved in the war when this film was produced.

Perhaps the biggest stumbling block of the tim is one that will still crop up for many modern viewers. In the Year of the Pig is relatively anti-American and decidedly pro-Ho Chi Minh. He is regularly praised as the George Washington of his country and as one of the pre-eminent nationalist leaders on the world stage of his decade. There is no question that de Antonio’s point of view is that of the Vietnamese communists as the oppressed heroes of this tale, and that the American military’s part in the story is at best tragic and at worst actively evil.

In the Year of the Pig is not an easy film to judge, and this has nothing to do with nationalism. While there’s still plenty of anti-communist sentiment in this country today despite the almost total lack of communist countries to direct it against, time has greatly altered the attitudes of many people concerning the U.S. involvement in the conflict. What seemed radical and dangerous at the end of the 1960s now frequently seems rational and reasonable. This isn’t true of everything, of course, but the blatant racism of the American military is demonstrated through the course of the entire picture. No, that’s not really the reason this is a difficult film to review—the reason is much more prosaic. The biggest problem is that it is Once it asserts its premise of the problematic issue of America in Vietnam, it has essentially nothing left to say.

This is not a bad documentary, but a variety of factors make it difficult to watch. Things like an immolated monk are difficult to view. The film’s dedicated focus is, in the world of today, just too simple a position to take.

Why to watch In the Year of the Pig: It pulls no punches.
Why not to watch: If you’re an American nationalist, it will make you burn with anger.

Email ThisBlogThis!Share to TwitterShare to FacebookShare to Pinterest
Labels: documentary, Emile de Antonio, In the Year of the Pig, war