Moved by the Spirit 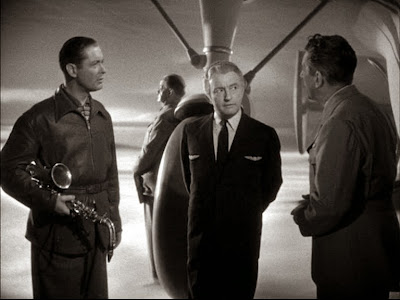 There are certain stories that we appear programmed to respond to. While Here Comes Mr. Jordan is the earliest incarnation of this particular story that I’ve seen, it’s also the second time I’ve seen this story exactly and the third that I’ve seen that runs along these lines. What I’m about to say will be confusing. The remake of Here Comes Mr. Jordan is the 1970s Heaven Can Wait. The original Heaven Can Wait has some similarities in plot, but it’s not a related film.

Here’s the elevator pitch: A boxer named Joe Pendleton (Robert Montgomery) is prepping for a title fight. He flies himself to New York, but a structural defect on the plane causes a crash. His guardian angel equivalent (Edward Everett Horton) pulls him out of the plane before the crash, hoping to spare him the pain and suffering of his death. Unfortunately, Joe wasn’t meant to die in the crash; in fact, he’s got another 50 years coming to him. By the time he’s taken back to earth, his body has been cremated, leaving him (and his handlers) in a quandary.

Enter Mr. Jordan (Claude Rains), who takes Joe around to a host of new, about-to-die bodies that he can inhabit. When he encounters Bruce Farnsworth, things change. Farnsworth is about to be murdered by his wife (Rita Johnson) and his personal secretary (John Emery). As this happens, we learn that Farnsworth is something of a crooked businessman, and has gotten the father of one Bette Logan (Evelyn Keyes) arrested for fraud. Deciding to help her, Joe becomes Bruce Farnsworth.

Of course, Joe Pendleton is still obsessed with becoming the new boxing champ at his weight class. Since Farnsworth is filthy rich, he decides to use that money to train himself up, going so far as to hire his old trainer, Max Corkle (James Gleason) to work with him. He also convinces Corkle that he’s really Joe by playing on his saxophone and providing him with a great deal of information that only Joe could know. While all of this is going on, Joe as Bruch begins to fall for Bette. And time is running out because someone else is about to get the shot at the title that should have gone to Joe.

Here Comes Mr. Jordan has some real problems, some of which were healed in the remake. First, it’s simply silly that a businessman would be taken seriously as a fighter in this situation, no matter the payout he promised to the other fighter. This is the same problem the remake has. The most implausible part of the plot isn’t one person’s spirit inhabiting the body of another person. It’s that the parts that are supposed to reflect the real world simply do not in any way.

But there’s more here to worry about. Chief among these problems is that Here Comes Mr. Jordan simply happens much too fast. There’s no time for anything to build or for any sort of character development. Joe/Bruce sees Bette once or twice before he’s professing his love to her and wants to marry her. “Bruce Farnsworth’s” noble deed of repaying money that he swindled from other investors (and Bette’s dad) is simply repaid and that’s the end of it. As of that moment, Joe as Bruce essentially stops running his own company, and there are no repercussions here. In the remake, this is handled much better.

We also still have the issue of how much Max Corkle ends up knowing by the end of the film. He’s aware that there is a spiritual/spectral Mr. Jordan, that Joe’s spirit is inside another body (and another one, eventually), and he walks off with that knowledge complete, at least as far as we know. Worse, he’s able to produce information that no one would know for other people because of his connection with Joe and what Joe has told him. It simply doesn’t work. This is true in the remake as well, but the remake does a much better job of handling the resolution of the mystery at the end.

Finally, I think the remake is better cast in a lot of ways. I don’t have an issue with Robert Montgomery here. He comes across as what he’s supposed to be: a palooka. I’m also always happy to see Edward Everett Horton in anything ever. And I love Claude Rains; always have, always will. In the remake, that role is played by James Mason, though, so it’s a push. I can’t pick one over the other. Both of them have great, butter-smooth voices, emanate class and sophistication, and are always magnetic on screen. Everywhere else, though, the remake wins in terms of who is playing which role.

Here Comes Mr. Jordan is a fine little movie, albeit one that doesn’t develop enough and that goes away too quickly. For all its plot problems and the weird realism issue—what doesn’t work is what should make the most sense—I enjoyed watching it. It’s harmless and sweet, if silly.

Why to watch Here Comes Mr. Jordan: Claude Rains, and a fun story.
Why not to watch: Too short and it strains credibility.