Beating, Yes. Devil, Not so Much 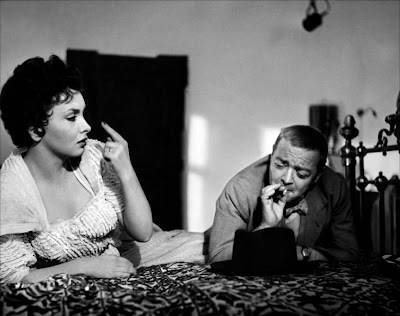 Film noir wasn’t known as film noir until after the style was no longer in vogue. There had to be a sense of it, though, because John Huston managed to parody the style with Beat the Devil. This was a film that was not warmly received when it was originally released, but that has grown in stature over time. It’s become quite the classic, and has a cast that backs up that sort of evalutation.

We have a trio of criminals looking to exploit the mineral wealth of Africa. Specifically, they are looking to get their mitts on uranium deposits, since those deposits are essential for the production of both atomic energy and atomic weaponry. These men represent the varying fading powers of Europe. Specifically, there is the British Peterson (Robert Morley), the German-by-way-of-Chile O’Hara (Peter Lorre), and the Italian Ravello (Marco Tulli, who is perhaps the most angular human being to ever exist). They are joined by the fascist and Hitler-boosting Major Jack Ross (Ivor Barnard).

Working for them is the real star of our film, Billy Dannreuther (Humphrey Bogart), who knows the people who can help them get the uranium land in Africa. Billy and his wife Maria (Gina Lollabrigida) are running out of money it appears, although Billy evidently once had quite a bit. Billy is disturbed at the beginning of the film when he discovers that someone named Vanmeer in the U.K. has been killed, and he immediately suspects the men he is working for.

Into this mixture we throw the Chelms, a British couple also on their way to Africa to start a coffee plantation. Harry Chelm (Edward Underdown) is a proper gentleman who soon takes an interest in the exotic Maria Dannreuther. Gwendolen Chelm (Jennifer Jones) similarly takes an interest in Billy and begins spinning a tale of the enormous amount of (wait for it) uranium wealth on her husband’s land. She and Billy immediately become an item in that way that really only happens in movies. Or, at least in movies they call in love while in the real world it’s all about infatuation and lust.

Regardless of this, everyone is scheduled to sail to Africa on the same boat, and they are initially delayed. It’s not until the midpoint of the film that the boat sails, and then all of the little plots and intrigues that have bounced around in the film so far become far more pronounced. Everyone scams everyone else. Maria is scamming Harry, Gwendolen is scamming Billy and her husband both, and everyone wants the uranium for themselves.

Beat the Devil purports itself to be a comedy. The problem is that it’s not really that funny. In fact (or as Gweldolen is fond of saying, “in point of fact”), the only really comic character is the ship’s purser (Mario Perrone). The adventure is peculiarly madcap throughout, but it really just isn’t very funny. I realize that the drunken captain (Saro Urzi) of the ship is intended to be funny, but a drunken Italian man screaming constantly really isn’t much for comedy, at least for me. It’s not too long before he becomes a character I could easily live without, and it’s not without some pleasure that our principles leave the ship and we don’t have to listen to him screaming.

A bigger problem is one that might not so much be the problem of the film. It’s that I had most of this figured from about 15 minutes in. Once we’ve been properly introduced to all of the various characters, it’s pretty evident where this film is going from stem to stern. The double crosses and more didn’t surprise me at all. I was expecting something far more interesting.

It’s disappointing. As much as I wanted to like this film, I didn’t crack a smile once. It very well may be that I have seen too many other movies that do something similar, that attempt to tweak the viewer into thinking one thing and then constantly tweaking them into something else. The truth is that filmmakers have gotten better and better at this. Huston’s film is decidedly ham-handed in this respect.

Why to watch Beat the Devil: It’s got Bogart and Peter Lorre, and that’s generally a good and worthwhile combination.
Why not to watch: It’s supposed to be a comedy, and it’s really not that funny.