That Postman Keeps on Ringing 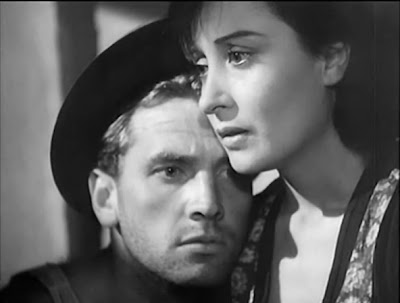 It’s strange how we remember films. I know intellectually that Luchino Visconti’s Ossessione came a couple of years before The Postman Always Rings Twice, but it doesn’t change the fact that I saw the latter first. There’s a real sense going through this film that I’d already seen it. It’s not shot-for-shot the same, but the two films are similar enough (and are based on the same book) that this film filled me with a definite sense of déjà vu.

If you’ve seen The Postman Always Rings Twice, you’ve seen this film, and vice versa. There are some significant differences, but the basic idea is identical with only the names different. A drifter named Gino (Massimo Girotti) floats into town and winds up and a sort of gas station/restaurant/general store run by a man named Bragana (Juan de Landa). Bragana is a middle-aged man and decidedly fat, so it comes as a surprise when we encounter his young and attractive wife, Giovanna (Clara Calamai). There’s an immediate attraction between Gino and Giovanna.

Bragana is angry when he finds the drifter in his kitchen with his wife, and is even angrier when he discovers that Gino hasn’t paid for his meal. When he discovers that both he and Gino were in the military and a similar service he lightens up, and relents completely when Gino agrees to fix Bragana’s water pump and his car. So while he rides off to get the part Gino needs, Gino makes time with Giovanna. He eventually gets her to agree to run off with him, but she relents. She has a decided fear of being poor, and while she doesn’t love her husband, he’s at least stable.

Here’s where the story breaks from the novel and the more well-known American version of it. Gino runs off on his own and meets up with Lo Spagnolo (The Spaniard, played by Elio Marcuzzo). He’s a travelling performer and he takes in Gino, giving him a sort of productive life on the road. It’s in a nearby city, while Gino is working as a sandwich board carrier, the he meets back up with Giovanna and Bragana.

And now the story goes back to where it almost has to go. Gino is unable to resist the charms of Giovanna and returns to the store with her and her husband. He and she plot to kill Bragana and arrange the murder so it looks precisely like an accident, which not only leaves the store to her, but also grants her a hefty insurance policy. Of course, this also means that the two of them share a dark and dangerous secret, which means that the two of them can’t trust each other, and can’t live without each other. From here, the film builds to its inevitable conclusion, which isn’t a happy one for anyone involved.

Visconti concentrates much more heavily on the environment of these people than do the following versions of this story, focusing on the reality of their situation rather than the unfolding plot. This isn’t to say that he ignores the story, but is intent on at least in some respects blaming the story on the moneyless reality of the characters. The emphasis (at least in what I saw) is on making this a real story with real characters in a believable situation rather than something more lurid and prurient.

The problem with Ossessione is not the fault of the film. It predates most films noir, and in many ways informs the style, but is also far less well known (at least in America) than most films noir. Someone interested in the style will likely see plenty of other films before this one, and so this film becomes sadly predictable. We know what the woman is really like underneath the façade of needing Gino. We know what the man is like in part because of his unending desire for Giovanna. There are only a few different ways this can play out and all of them lead to the same place. Ossessione is inevitable in where it goes, and we know this because so many other films go to the same place.

Visconti was a tremendous filmmaker, though, and the film is worth seeing if only for his visual style. The plot is virtually the same as the aforementioned film and also bears similarity (again in reverse) to Detour in some ways. And really, Visconti’s style is the main draw. You can get the same basic plot a lot of places, most of the same story in The Postman Always Rings Twice, and even some similarities in a film like Les Diaboliques. In many of these cases, the other films are tighter and shorter, which works well for a narrative like this, the speed of the story matching the inevitability of the climax. In other words, Visconti’s film has visual niceties that are great for film study, but don’t do much for the story itself. It’s fat in that respect, which makes it less a taut thriller than the versions that followed it.

Why to watch Ossessione: An early example of non-American noir and Italian neo-realism.
Why not to watch: This story has been filmed at least three times, and possibly more easily found in English.