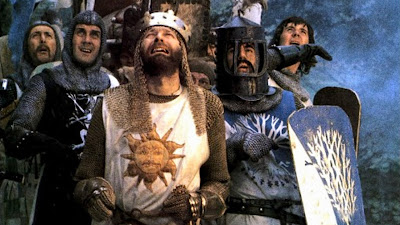 There was a time when I would have been happy to watch Monty Python and the Holy Grail at any time just because. But it’s this movie that really taught me what maturity means. I can, as someone who has seen this film in the multiple dozens of times, quote virtually the entire thing. I can watch the movie and go right along with the dialogue. However, I don’t. That, friends and neighbors, is maturity.

Don’t get me wrong—I’m a Python-head from the old school. I had a dog named Monty Python and another named Basil Fawlty. I own all of the shows on DVD as well as the bound versions of the show scripts. Tonight was the first time in years I’ve seen this, and, well, it’s still just as funny as it ever was. In many ways, classic comedies like Airplane! are modeled on Python in the sense that every possible joke is tossed against the wall to see what sticks (something Airplane! did in spades). The thing about Holy Grail is that a surprising amount of it does stick. Ridiculous things like the opening credits, the gorilla hand turning script pages, the coconut horses work as do the more highbrow pieces like Dennis and his mother discussing their anarcho-syndicalist commune.

In fact, it’s difficult to go into a great deal of detail with this film without getting into the details of the jokes, which ultimately destroys them. On its face, this is the King Arthur story. Arthur collects his Knights of the Round Table and they go out to seek the Holy Grail, which they have decided must be in England somewhere. They travel together, then travel separately, each one getting into ridiculous situations. Throughout, the members of Monty Python play multiple roles, with the exception of Graham Chapman, who plays only King Arthur and a couple of small roles. John Cleese (Lancelot), Michael Palin (Galahad), Terry Jones (Bedevere), and Eric Idle (Sir Robin) take most of the roles. Terry Gilliam handles the animation pieces and tends to play smaller roles, many of which have only a single line, or no lines except for the Old Man from Scene 24. Also appearing are Python regulars Carol Cleveland, Connie Booth, and Neil Innes.

The reason is actually pretty simple—the Pythons were smart enough to not do much that is specifically topical. The jokes are essentially timeless, so they are as funny now as they were when they were written.

It is, though, difficult to find something to say about this film that hasn’t already been said a couple of dozen times. It is one of the most beloved comedies in film history, and, I suspect, a film that many people simple don’t get. There isn’t a great deal of middle ground on this film. It’s either a film that you understand on a deep level precisely what makes it so entertaining, or you just don’t get it and can’t figure out why people like it so much. Naturally, I imagine this means that most of the comments this post generates will be from people who are completely neutral on this film. Still, I think those people are in the minority.

Anyway, it goes without saying that I love this film. Of all the films I have seen in my lifetime, I have probably seen this one more than almost any other, and it never fails to entertain me completely. If I have a complaint, it’s that the end doesn’t work for me as well as I would like. The last few minutes of the film always feel like a letdown to me, like there should be some better resolution. I get why it goes where it does—I understand the entire meta-humor of the scene, but I still have always wished for an actual resolution to the quest better than the relative non-sequitur we get.

Why to watch Monty Python and the Holy Grail: Because it’s brilliant in a way that few things are.
Why not to watch: The ending works as meta-humor, but feels unsatisfying.