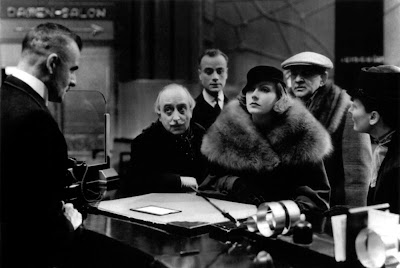 It’s not without some trepidation that I look at older Oscar films. There was a massive feeling of accomplishment when I knocked out everything from 1936 and previous—the first 100 films on The List—and I knew that diving back into that early period would often mean some difficulties. I opted for Grand Hotel for the simple reason that I found it on a library shelf. Often, my movie selection goes no further than 1) I found it and 2) I realize it’s on one list or another.

Grand Hotel takes place in Berlin during the Great Depression, following the typical 1930s pattern of displaying opulence during a period of economic disaster. It opens with Dr. Otternschlag (Lewis Stone) muttering that at the Grand Hotel, people come and people go but that nothing ever happens. He repeats this line at the end of the film. In between, of course, we see a great deal happen.

Essentially, we have the lives of half a dozen or so people that are intertwined during their stay at the hotel. First we have Baron von Geigern (John Barrymore), who is a Baron by title but completely out of money. He can’t afford the Grand, but is staying there because he supplements his meager income by stealing the jewels of wealthy women. In particular, he has his eyes on a string of pearls. The pearls are owned by Grusinskaya (Greta Garbo), a faded and fading Russian ballerina who is starting to realize that her career is over and that the fans who once flocked to her are not coming back.

Into this mix we also have Otto Kringelein (Lionel Barrymore), a weedy little man who has learned that he is suffering from an incurable ailment that will soon kill him. Upon learning that there really is no hope for him, he has drawn out all of his life savings and put himself up at the nicest room at the Grand in an effort to truly live in his last few days. Also at the hotel is Kringelein’s boss, Preysing (Wallace Beery), an industrialist attempting a business merger to save his failing firm. While at the hotel, he employs a stenographer named Flaemm (a very young Joan Crawford), who we soon learn is part stenographer, part escort, and willing to do anything to survive.

And these lives become quickly enmeshed in each other. Flaemm, typically known as “Flaemmchen” (the “chen” is a diminutive in German) meets both Kringelein and the Baron and immediately falls for the Baron. The Baron also befriends the sad little Kringelein, who is effusive in the return of that friendship. Baron von Geigern seems to return Flaemmchen’s affections until he breaks into Grusinskaya’s room for the pearls. When she returns after another disappointing show and appears prepared to commit suicide, he returns her pearls and talks her out of it, immediately falling for her. Meanwhile, Preysing commits fraud and makes a play for Flaemmchen, hiring her on as a secretary, but with an obvious ulterior motive.

There’s a lot going on in this film, but all of it makes perfect sense in the context of the narrative. As their lives interact, the conversations and encounters between these people echo across the rest of the hotel like ripples from a thrown stone in a pond. We get a genuine feel for each one—Kringelein wants only to be liked and to be surrounded with life, since his own life will soon pass. He hosts a gambling party in his room and wins, but encourages everyone to stay and enjoy the champagne he is buying just so he can bask in their company a little longer. The Baron, with an opportunity to steal from the little man, passes it up despite desperately needing the money, his empathy getting the better of him. Flaemmchen is, well, resolved. Knowing that a trip to England with Preysing will mean spending nights with him, she is determined to go because he promises her a new wardrobe and 1,000 marks for her time and work. She’s repulsed by him and the idea, but will do it because it means survival for that much longer.

What I very much like about this film is that it doesn’t resolve everything. We get instead just these lives of these particular people as they intersect in this one place. Stories resolve in front of us at the start of the film, but we don’t know about it because we don’t know the players. At the end of the film, a new couple dressed in flying suits complete with leather helmets bearing goggles arrives. There’s a sense that they have a story that will play out, too, but they arrive in the final five minutes, so we are not privy to their adventures at the hotel. It’s real, and it’s believable. What I enjoy best about the film, though, belongs under a spoiler tag.

The Baron resolves to leave with Grusinskaya when she departs for Vienna. Needing money for the train ticket, he breaks into Preysing’s room and lifts the man’s wallet, but is caught. Preysing uses this as an opportunity to beat the man to death. When Flaemmchen runs to Kringelein for help, the little man sees an opportunity for payback against his cruel and mildly stupid boss and calls the police.

Meanwhile, Grusinskaya knows nothing of any of this. While the police are arriving and Preysing is pleading with Kringelein, we see the ballerina calling the Baron’s room over and over, begging him to answer. Eventually, when she checks out, her entire entourage hides the fact that he has been killed from her, assuring her that Baron von Geigern will be waiting for her on the train. It’s terribly tragic, almost painful, to see her running off to meet the lover who will never arrive. It’s with a combination of black comedy and tragedy that a hotel employee tells Grusinskaya that the Baron is no longer at the hotel mere moments after the body has been removed.

Grand Hotel is surprisingly rich and detailed, a film that contains an enormous amount of depth from an era that most people think was incapable of such human drama. This is a remarkable film filled with excellent performances and a true sense of reality. It’s also a fascinating way to tell a story, or 100 stories, but there is really only so much time a movie can and will run. I’d have loved to see a series of these—it would make a fantastic episodic television series, with the guests for next week’s show arriving right at the end of the current week. I’m a little surprised no one has done it. But no matter—Grand Hotel does exist, and it’s worth making an effort to see.

Why to watch Grand Hotel: A surprisingly vibrant story.
Why not to watch: No closure.

Posted by SJHoneywell at 4:39 PM