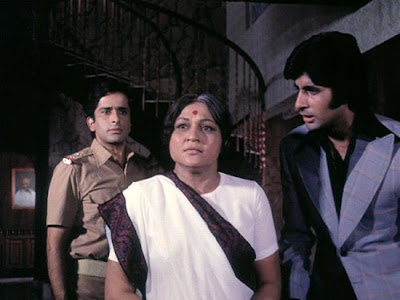 Melodrama has a place in film, and evidently, that place is Deewaar (The Wall, and sometimes spelled Deewar). In the first twenty minutes of this film, the melodrama is thick enough to cut with a knife and spread on toast. It’s a sort of melodrama marmalade—tart and sweet and with pieces of the rind thrown in for good measure. The film never really goes away from the melodrama completely, but it’s poured on thick in the beginning.

Couple this with the idea that Deewaar is a Bollywood film as well as real drama, and you have something of a mix. For instance, there’s no real music in the film until the 40-minute mark when suddenly…song! Out of nowhere. I was starting to think that this would be a Bollywood film without being a Bollywood musical, but I couldn’t possibly be that lucky, could I?

Regardless of the vast amounts of melodrama here, this is a story of two brothers, their mother, and what happens to them because of their father. As we start, their father is a greatly respected man. Anand Verma (Satyendra Kapoor) fights for the rights of his fellow mine workers, hoping to get them decent pay, conditions, and hours. When he is called in to discuss an agreement, though, he finds that the mine owner has given in on nothing; instead, he has kidnapped Verma’s wife (Nirupa Roy) and his children, Ravi (Shashi Kapoor as an adult) and Vijay (Amitabh Bachchan as an adult). He gives in.

This removes any status he had with the workers and causes his family to become outcasts. In fact, at one point Vijay is manhandled and tattooed with “My father is a thief” on his arm. Eventually, the boys and their mother move away. Ravi stays in school and is educated, but can’t find work. Vijay works on the docks and slowly enters a life of crime as the means for making some real money. We also learn here that the good son, Ravi, frequently attends religious services while Vijay does not.

Vijay’s life in crime starts when a man on the docks refuses to pay a small amount of his paycheck to a group of thugs essentially offering protection. The man is killed accidentally, but killed nonetheless. Vijay stands up to the thugs the next week, but thrashes them, which brings him to the attention of a rival group of criminals. They recruit him, and Vijay proves himself adept at criminal rackets despite his lack of education. At the same time, Ravi is convinced that the best place for him in terms of a career is the police force, and he joins in part because of the influence of his girlfriend Veera’s (Neetu Singh) father. So an hour or so into the film, we have a situation where the two brothers will almost certainly be in a directly adversarial relationship.

These two events—Vijay making a shitload of cash from illegal activities and Ravi becoming employed by the police happen literally on the same day. The melodrama doesn’t stop there. Essentially on his first day on the job as a real police officer, Ravi is assigned the case of bringing down a gang of smugglers (a major post for a new cop). Of course, those smugglers include Vijay. He decides he needs to think about it. On the beat, he chases and eventually shoots a thief, discovering that the boy was only stealing bread because his family is starving. Ravi, always the good son, takes the family bread and is essentially handed a lesson that crime is crime, and thus he starts hunting his brother, who has put him up in a nice house.

Deewaar is, more or less, a compressed soap opera, albeit with occasional musical numbers. There’s really no other way to look at this film—the music, the camera work, the (over)acting style…it screams that this is a criminal version of General Hospital. Seriously, for the bulk of the film, the soundtrack is dominated by an organ. The action scenes are similarly non-action-y, as if directed by someone who’s only knowledge of cinematic action comes from reruns of Mannix. It also doesn’t help that many of the meetings, especially those of the criminals, look exactly like they are taking place in cheap hotel rooms.

It’s impossible to dislike this film completely. The main reason for this is that Deewaar is made completely in earnest, almost as if (and this might be the case) there was no conscious knowledge of the intense melodrama on display. This is a film that, with a slight push, would fall deeply into a well of farce. It’s saved only because it appears that Yash Chopra was honestly playing it straight. I’m not nearly well versed enough in Bollywood to know if this is indicative of the style, but I suspect it is. Seriously, though, the cheap incense of melodrama is impossible to avoid. At one point, Vijay is being pursued by the police, who evidently don’t think to go see if Vijay is just sitting at home. Then, just when Vijay can’t take more bad news, he learns his mother is in the hospital, and we get a full-on minor chord played on the house organ accompanied by a sudden close-up on Vijay’s face.

I also take some issue with the musical numbers. This is not for the reason I typically give. Here, it’s simply that they don’t seem to fit. They come out of nowhere, appearing in the middle of scenes that would seem not to need a musical number. Beyond that, every Bollywood musical number I’ve heard has a particular strange issue—the voices always sound the same. It’s as if there’s only one woman in all of India who sings for musicals, and she does the soundtrack for all of them. Beyond that, though, there aren’t enough of them to qualify this as a musical. There’s like one every 45 minutes, maybe four in the whole film.

On the other hand, I find it ridiculously charming when a group of actors suddenly drop into English for a word or a phrase. There’s a part of me that smiles every time that happens.

Deewaar isn’t a terrible film. It’s even a pretty good one. But it’s one that will strike the typical American viewer strangely because it feels like a story for daytime television, or with a shift in focus more to the mother, like a Lifetime miniseries.

Why to watch Deewaar: Because everyone should expand his or her cultural horizons.
Why not to watch: It often feels like 1970s made-for-Indian-television.