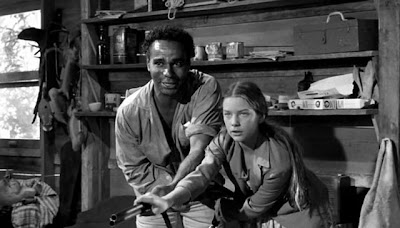 I’ve said before that the Holocaust is probably the most common topic of films on The List, and it may well be. Taken more broadly, though, I’d suggest that a plurality of films deal at some point and on some level with racism. Many of them do this overtly while others do this without intending to. Still others include racial tensions and issues only in retrospect, decades after their original release. Movies not intending to address the idea of racism still do, looked at with modern eyes. Luis Bunuel’s first English language film, La Joven (The Young One) is a film that tackles the idea of race head-on.

Traver (Bernie Hamilton) is on the run from small Southern town justice. He’s been accused of a rape he didn’t commit, but because he’s black, he’s guilty before proven innocent, and nobody is going to try very hard to prove him innocent. He winds up on an island that’s actually a hunting preserve. Little does he know that there are a couple of other people on the island with him.

The main person he’ll have to contend with is Miller (Zachary Scott), who acts as a sort of game warden. He has a handyman named Pee-Wee who lives in an adjacent cabin with his young granddaughter, Evalyn (Key Meersman). When the film starts, Pee-Wee has died, leaving Evvie without a family save for Miller. Miller is mildly abusive to the girl until he tells her to clean herself up and discovers that under the dirt and the messy hair, she is just on the verge of becoming a woman, something that will definitely come into play later.

And really, this is all the set up the film needs. Traver wants nothing more than to find some gasoline for the boat he stole and to get the hell away. Evvie is purely innocent, not having enough common sense or an idea of the world to not keep her mouth shut about anything, or to really understand much of anything. Miller suddenly finds himself in the position of being sexually attracted to the young girl. Miller finds out about Traver and can’t quite bring himself to believe that he didn’t take advantage of the girl—and there’s a sense that part of his anger over this is that he was thus denied her deflowering.

Things get complicated when a minister named Fleetwood (Claudio Brook) arrives from the mainland with the severely racist Jackson (Crahan Denton). Jackson finds out about Traver, convinces Miller of the man’s alleged crime, and this sets up the third act. Essentially, Reverend Fleetwood discovers Miller’s nocturnal actions with the girl and threatens, and this leads Miller to make a decision of not only what to do about Evvie, but what to do about Travers.

La Joven is Bunuel’s first film in English, and only one of two that he made. It is in many ways unlike a lot of his other films, with only some of his Freudian themes and his obvious foot fetish coming into play. In fact, I was rather surprised at the role of the church in this film. For many of Bunuel’s films, the church is portrayed as something neutral at best, and actively to be mocked in general. Here, though, the presence of Reverend Fleetwood is almost entirely positive. The man is the only one of the three white men on the island to see Traver as innocent on the face of things, and he is also the only one aside from Traver who seems to have the girl’s best interests at heart.

This is a thought-provoking film, or at least was for me. The issue of race here is central to the narrative, and it’s never unclear where Bunuel’s sympathies lie. Traver is depicted almost entirely positively. When he takes Miller’s gun and gasoline at the start of the film, he pays for it, being completely unwilling to steal it. In fact, when he first meets Evvie, he takes an apple from her and pays for it. We’re never put in a position of thinking that he’s guilty of the crime he is accused of—his innocence is never seriously called into question. It is not us who must be convinced of this at any time; instead, it is Miller who must be convinced that Traver is innocent of the crime.

I enjoyed this film quite a bit. It’s not at all what I was expecting from Luis Bunuel, but I found a lot here to recommend the film in general. Key Meersman’s Evvie is probably the film’s weakest point; she’s frequently a bit wooden in her acting, which can be put down to her age and her inexperience. Zachary Scott and Bernie Hamilton form the real emotional center of the film, though (despite the name of the film indicating that the girl is really the focus), and both of them are excellent.

This might be the Bunuel film to see for those who aren’t really fans of Bunuel. His supporters might find themselves somewhat adrift in the film as it proceeds, but for the non-surrealist fan who wants to beef up the old resume, this is a worthy addition.

Why to watch La Joven: A new take on racism and sexuality.
Why not to watch: It’s less Bunuel than most Bunuel.