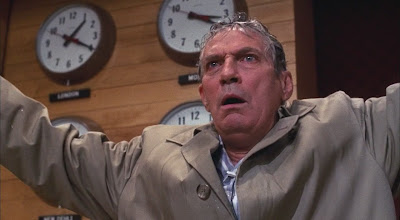 I don’t think Sidney Lumet’s Network can be adequately summed up. There is a brilliance here that cannot be contained in words properly. It is a film like no other. It is terrifying, funny, ridiculous, staggering, and shocking as well as one of the most prescient films I have ever seen.

Here are the nuts and bolts of it. Howard Beale (Peter Finch) is the anchor of UBS Evening News. His ratings are the lowest of any news program and so he is fired, pending in two weeks. As it turns out, his personal life is a shambles—no kids, his wife has died the year before—and he says on the air that his retirement is imminent. He also says that on his last broadcast, he will publically kill himself on the air.

Naturally, this causes quite a stir. His boss and good friend, Max Schumacher (William Holden), pulls Howard off the air. However, it turns out that Howard’s announcement has generated a vast amount of publicity. So, just as naturally, he’s put back on the air for an opportunity to say goodbye to his audience (without shooting himself). He turns this into an editorial comment about why he said what he said. What he claims is that the thing that keeps us going day to day in our lives is bullshit, and that he just ran out of it. This, of course, causes an even bigger stir.

There are complaints and problems, but Howard Beale suddenly becomes the biggest story in the country, and UBS is essentially placed in a position of having a single potential hit show, which it desperately needs. Frank Hackett (Robert Duvall), who controls the network for its corporate owner, is willing to do anything to get the news department to pay for itself, and is just as willing to do anything to discredit and oust Max Schumacher. We’re also introduced to Diana Christensen (Faye Dunaway), who is a vice president in charge of programming. She lives and breathes television and knows a potential hit when she sees it. She’s pimping for the chance to program the news herself.

And then, the magic happens and Beale truly loses it. After spending a day walking around in the rain, he appears on air and begins truly preaching his message. The refrain of his sermons is, from this point forward, “I’m as mad as hell and I’m not going to take it anymore!” And suddenly this becomes something that people are shouting out of their windows. Max is opposed to this change, but the situation has come to a significant head, and he is pushed out at the network in favor of Diana, who takes over the news programming. Of course, this doesn’t prevent the two of them from having an affair, which eventually leads to Max leaving his wife (Beatrice Straight) for her, at least temporarily.

Through all of this, Diana is attempting to put together a new show based around the activities of a fringe radical group that films its criminal activities, a show that eventually goes on the air as “The Mao Tse-Tung Hour.”

Network is deadly serious, and yet darkly comic as well, the way many good dramas are. The comedy in general is not of the laugh-out-loud variety, but much more sardonic in tone, cynical and biting. The situation the characters are placed in is singularly ludicrous, but is so mostly because it is so painfully believable, not the opposite. Sprinkled throughout this is the fact that in addition to being a drama and being laden with on-target, brutal observations, Network is accurate about the role of television and the path of television news and its blending with entertainment. Howard Beale becomes a sensation because he ignores the drawn line between news and commentary, a situation that has become reality on networks today like FOX and MSNBC. What was shocking in 1976 has become tame when compared with the news media of the world today.

It’s also filled with incredible performances top to bottom. Peter Finch, Faye Dunaway, and Beatrice Straight won Oscars for Best Actress, Best Actor, and Best Supporting Actress respectively, and the screenplay walked off with a statue as well. But in addition to these, William Holden was nominated for Best Actor, and Ned Beatty, playing corporate chief Arthur Jensen was given a nod for Best Supporting Actor, almost certainly on the strength of his brutal counter-sermon to Howard Beale’s message. Network demonstrates what highly talented people can do with a fantastic script.

It’s worth talking about that scene with Ned Beatty for a moment. After a particular invective by Beale reveals a dark secret—the corporation that owns UBS is being purchased by Saudi Arabian corporations—Jensen calls for a meeting with Beale. Rather than firing him or simply talking to him, Jensen darkens the room and becomes effectively the voice of God in the boardroom, talking down to Beale and giving him a new sermon to go forth and preach. This new sermon is in many ways the flipside of what he had been preaching. Now, though, instead of telling people to get up and speak for themselves, Beale begins to tell them that their lives are without meaning because that is the way that the world has been set up. We exist, in this new philosophy, as merely fuel for the machine, corporate entities that exist only to perpetuate the corporation.

The main problem with Network is a problem only for those who choose to write about it. There is no way to capture just how damn good this film is in words. It is a film that needs to be seen and experienced. The script needs to wash over you. You need to not only see and hear but also feel Max Schumacher’s dressing down of Diana Christensen. It’s both the words and the performances that make this film what it is, and what it is is something far greater than the sum of its already stellar parts.

Network is prescient and powerful, and one of the greatest films to come out of the 1970s. This is another film that, should this list be reduced by 90%, would still be here as something that should be required viewing for anyone interested in film in any way.

Why to watch Network: Because it’s staggeringly brilliant and prescient.
Why not to watch: Because you’re scared to see just how real it is.