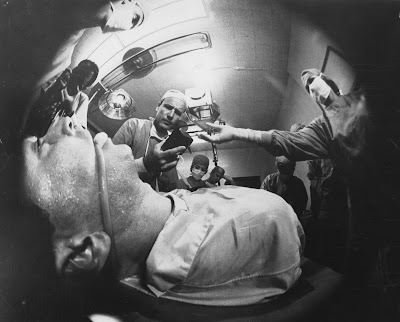 If you had the chance to start your life over, make a clean break from everyone and everything you’ve ever known and have an entirely new life, would you? That’s the question posed by John Frankenheimer’s Seconds, and the results are interesting to say the least. The film posits that precise question, allowing us to see what happens as one man goes through that very issue, a complete break from his past and a new life filled with the sort of freedom everyone wishes he or she had. This is a fascinating and thought-provoking film, one that brings up about as many questions as it answers.

Arthur Hamilton (John Randolph) is a middle-aged man going through a crisis. He has a decent job at a bank, a wife with whom he has a respectable and comfortable relationship, and a married daughter who rarely visits. His world is turned upside down when, out of the blue, he receives a call from a friend he knows to be dead. On the train, he’s slipped an address, and he gets another call from the friend who proves who he is with knowledge that only the two of them share.

Hamilton is distressed by this, naturally, but the next day goes to investigate the address. He starts at a laundry, is given another address, and winds up at a meat packing plant. A short driver later, and he’s at an undisclosed location. He’s drugged, and when he awakens, he’s told that everything he knew is over. His wife is financially secure and no longer really needs him. The same is true of his daughter. He has an opportunity to start his life completely over—with radical surgery, new fingerprints, and an otherwise unidentified cadaver placed in his stead, Arthur Hamilton will die and be reborn as Tony Wilson. Left with no choice but to go through with it, He does, and emerges looking like Rock Hudson, who plays Hamilton/Wilson for the rest of the film.

His adjustment is slow and difficult. He’s given a completely new identity with expertly created credentials, a career already blossoming as an artist, and a new home in Malibu. Slowly, thanks to his meeting with Nora Marcus (Salome Jens), he emerges into his new life, suffers a few setbacks, and discovers that The Company (the faceless entity that created this new life for him) exerts a tremendous amount of control over his new existence. Essentially, he discovers that even in this new version of himself—younger looking, attractive, talented, wealthy, and unattached, there are things about it that he doesn’t like. Where it goes from here is both fascinating and terrifying, and not worth spoiling.

Seconds is without question some of Frankenheimer’s best work. It is stylish and slick and features some disconcerting camera work (particularly in the beginning) that truly make it shine. The film opens with a series of shots—fish-eye lenses, disconcerting close-ups, even a few shots that seem to presage first-person perspective shakycam work. For those with a more tender constitution in terms of motion sickness from film (like me), these initial shots are just short of nausea-inducing, but they quickly pass. There are also a few shots of surgery that are more suggestive than gory, but are still disturbing, again, at least to me.

The film goes to some very strange places throughout. Shortly after he meets Nora, the two attend a sort of bacchanalia that quickly appears to devolve into a sort of wine-soaked orgy. This is one of the most effective scenes in the film. Initially, people are simply reveling and drinking wine. Then, one of the participants strips nude and begins stomping on grapes in a huge vat. She is quickly joined by others (and eventually by Nora and an initially protesting Tony) where stomping the grapes is only a small part of the activities in the vat. It is highly reminiscent of the Bacchae of myth, sweeping any and everyone up in their increasingly insane and distorted revelry. Tony, almost angry at first, quickly becomes a part of the wine-fueled mass of bodies in the vat.

For me, I can only be happy that I chose to watch this film tonight. It has felt like the last several movies were merely going through the motions for me, presenting things on screen that I had little interest in and a great deal of trouble caring about. This film, though, rewards the viewer in spades. Everything here clicks on all cylinders. The photography is disconcerting and painfully intimate at times, almost as if we are forced into close proximity with Hamilton/Wilson’s old and new identities. It’s a departure in role and tone for Hudson, who is nonetheless excellent in the role of the confused and bewildered Tony Wilson. Even the soundtrack works well, remaining mellow and in the background in many scenes, but making itself known as Tony finds out more information or deals with sudden strange occurrences.

In many ways, and this is sort of an artifact of the story being told here, Seconds plays like an extended version of an Twilight Zone episode although it’s much longer for even the longer shows. This is by no means an insult--The Twilight Zone had some of the strongest writing on television. But the idea of this level of transformation has a sense of that science-gone-amok vibe often found in Rod Serling’s old program.

Serlingesque or not, Seconds is a masterful film, beautifully made and intensely acted throughout. The story is fascinating in the way that all good science fiction is, and the questions it asks are just as relevant today as they were when the film was created. While the ending is not of the Hollywood variety, it too is satisfying. That fits, though, because everything in Seconds is top-notch.

Why to watch Seconds: An original idea based on an idea that everyone’s had.
Why not to watch: Some of the photography might be nausea-inducing.