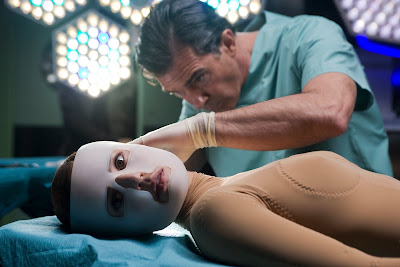 I love a good horror movie, but I’m the first to admit that medical stuff squicks me. It’s something I’ve certainly mentioned here in the past and will no doubt mention again. Surgical stuff bugs me far more than standard gore. I’m not 100% sure why this is the case, but it most certainly is. I can watch a guy get torn apart by zombies or cut in half by a creature from hell, but show me a scalpel and a surgical mask and I start to get nervous. So it was not without a certain amount of trepidation that I put La Piel Que Habito (The Skin I Live In) into the spinner. I knew there would be things here that bothered me, but when I’m given a film to watch for The Demented Podcast, I watch.

I knew something of the film going in, and from the sound of it, it called up recollections of Georges Franju’s Les Yeux Sans Visage, at least on the surface. I was right in that guess—the two films are similar in some ways, and the word is that Pedro Almodovar took some of his inspiration from the older film.

Dr. Robert Ledgard (Antonio Banderas) has been working on a new type of synthetic skin for burn patients. The skin is tough, designed to resist burning and to essentially be impervious to cutting and insect bites. It is revealed that to do this, Ledgard has spliced genetic material from pigs into the artificial skin, which goes directly against medical ethics. He is told to shut down his experiments. What Ledgard isn’t telling the rest of the medical community is that he’s been experimenting with the skin on a captive patient named Vera (Elena Anaya).

Back home, Ledgard dismisses his servants except for Marilia (Marisa Paredes), who has been with him for most of his life. Marilia has her own demons and secrets, it turns out. One day while Robert is out, Marilia’s criminal son Zeca (Roberto Alamo) arrives at the house. He is on the run from the authorities because his face appears distinctly in the surveillance video of his latest robbery. Since Dr. Ledgard’s house is secluded, he wants to stay there for a few days, but we learn that there is some history between him and Ledgard. Suddenly, this doesn’t matter to Zeca—he becomes aware of Vera’s presence and appears to recognize her. Consumed by lust, he ties up his mother, charges up the stairs, and rapes her. Ledgard arrives post coital and shoots him.

In the aftermath, we learn a bit more. We learn that Robert Ledgard is also Marilia’s son. Zeca was her son with another servant while Robert was her son with her employer. He was taken into the Ledgard family while Zeca essentially became a criminal. It’s here also that we learn of what drives Ledgard in his quest to perfect his synthetic skin. Evidently, Zeca came upon Ledgard’s family and took a shine to his wife, and the feeling was mutual. She ran off with Zeca, but one terrible car accident later left her seriously burned. Eventually, she committed suicide by jumping out a window.

We also learn that Ledgard had a daughter named Norma (Ana Mena) who suffered from a variety of social phobias no doubt helped along by her witnessing her mother’s death. Just coming out of her problems, Norma attended a wedding where she met a dressmaker named Vicente (Jan Cornet). The two run off to the garden, but she has second thoughts in the middle and freaks out. Vicente knocks her unconscious, and when she recovers, she has mentally gone to hell, eventually following her mother out the window to her death.

This covers about the first half of the movie. Yes, the first half. The significant twist is revealed just after this (and when I call this a significant twist, I am underselling it more than you can possibly know unless you’ve seen the film). I will not continue describing the film’s plot after this point, because the twist is so surreal that it should never be spoiled. It’s too bizarre, too insane to have it ruined.

Almodovar’s films are unique in the industry in a lot of ways. It wouldn’t be a stretch to say that in general he makes films that appeal mainly to women, or at least on the surface seem to be women’s films. This isn’t to say that men can’t enjoy them; I’ve liked the Almodovar films I’ve seen despite them being very much geared toward women. His films are difficult and address a number of difficult issues, so I’m not attempting to denigrate them by calling them women’s films. Almodovar doesn’t make dippy little rom-coms. His films are real and realistic, although this one skirts that edge. For much of his career, Almodovar has made intense dramas geared toward women. In this case, he’s made a horror/thriller film with more feminine sensibilities.

I’ll leave it here: I didn’t foresee where this film was going to go. It’s twisted and sick, and I enjoyed the hell out of it despite spending a good 20 minutes or so cringing at it. Almodovar maintains great control over his camera as well as a complicated story. While much of the first hour is shrouded in mystery, the entire thing becomes completely clear and everything that has transpired makes sense. This is a smart film and one I am happy to have seen. I haven’t seen all of Almodovar’s films yet, but he’ll have to have pulled out a great one to top this.

Why to watch La Piel Que Habito: Almodovar goes creepy in spades.
Why not to watch: If you are remotely squeamish, you won’t go much past half way through.